When DC Comics wanted to revive Jack Kirby’s Demon (Etrigan to his friends), the powers that be knew only one thing: they wanted the book to have an edgy feel along the lines of The Fast And The Furious.

Around the same time, Josh Dysart was making a name for himself writing for Hurricane Entertainment with a little book called Violent Messiahs. Perhaps you’ve heard of it. He and artist Tone Rodriguez pitched a Ragman revival to DC, which the company did not bite.

However, this Dysart guy looked to have the right tone for their Demon project. Teaming Dysart with artist Pop Mhan, the company got its project. Two weeks ago saw the first issue of The Demon: Driven Out, a hyperkinetic and (at this point) mysterious take on Etrigan that involves him switching hosts from Jason Blood to a young Japanese-American woman. Oh, yes, and she’s high up in a drug cartel and into street racing on the side. Frankly, like Dysart himself, I consider it far more fun than at least 2Fast2Furious.

At Comic-Con this past summer, while talking with Jan Utstein-O’Neill at Hurricane, I met Dysart and extracted the promise of an interview. We chose the written e-mail method, though both of us lamented the loss of spontaneity.

And yet, even with time to reconsider his answers, Dysart still shoots from the hip.

Derek McCaw: Did you have an affection for The Demon before this, or did it become a character you discovered as you went along?

Joshua Dysart: I didn’t really know much about Etrigan until I started researching for this gig, but it wasn’t long before I was a full-fledged devotee. There’s been some amazing work done with the character by absolute giants, and each artist has really managed to make him their own. Kirby’s original bouncy joyous arcane hero, Wagner’s self-satisfied thespian, Moore’s dense crouching thick furnace, Grant’s Robin Williams from hell, Ennis’ super sadomasochistic Dr. Seuss…it’s all great.

Few characters support such range. Many have that kind of range in their histories, but few actually support it. 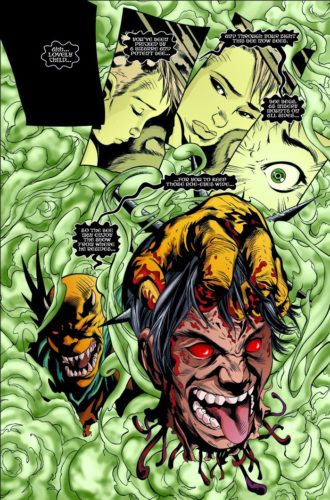 DM: If you had to put The Demon in Dungeons & Dragons terms, how would you align him?

JD: WOW! Your assumption that I’m a gamer promotes a certain stereotype of comic book writers, don’t you think?

Kirby’s Demon was Chaotic Good, but over the years the character has been drifting towards Chaotic Evil, which is how I play him for the purposes of Driven Out. I do dig on the idea that he could be manipulated into doing good… if his host is smart enough.

It’d be cool to get two separate players to act him out, one as the host and one as the demon (with the host having a Neutral Good alignment). Each player could take over for the other at the moment the character trans-mutated… what a fascinating game dynamic! Each side of the character would be oblivious to the other’s intentions. There could even be some kind of saving throw to allow the “inactive” player to exert his will on the other. RPG’s are for geeks!

DM: And yet you answered that question with such thoroughness. Does that embarass you in any way?

JD: No, I’m not embarrassed by it at all. I don’t game anymore, it’s too much of a time-suck, and I get paid to sink my creative energy into other things, but I was an avid gamer (almost always as the game master) until I was 21 years old.

I started with that first basic D&D set, but the fantasy setting got old quick, so I moved onto that first TRAVELER SET which is still my favorite system – it’s so simple and underdeveloped, with lots of room for the players and master to create anything they want. Then later I got into CALL OF CTHULHU (which I loved), PARANOIA, MAGE (never the live action version, just the RPG), JAMES BOND… even the JUDGE DREDD game.

I believe that my imagination is as developed as it is because I poured my heart and soul into those games when I was growing up. I never bought supplements. I created everything from scratch. My first genuinely premeditated creative act was banging out a playable world. I don’t think video games or even the strategy card games give the player that kind of opportunity to create. They fuel imagination, sure, but they don’t encourage you to actually feel imaginatively empowered. 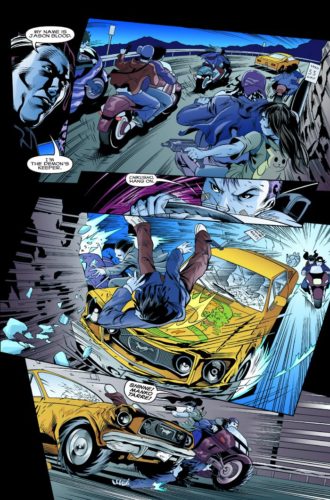 DM: You’ve said elsewhere that of course by the end of this mini-series everything will go back to status quo for Jason Blood and Etrigan. How much impact can you have on the character under those conditions?

JD: Honestly, not a lot. You have this time frame in which you’re given permission to explore these corporate characters, but you can’t make any profound changes, and even if you do, who’s to say the next guy isn’t gonna just change it back?

Ultimately, though, that’s all part of the fun with this kind of gig. It has to be or you’ll be miserable. Still, since I gave the interview you’re citing above, there’ve been further talks about the series. What I can and can’t do with the character has changed slightly.

I can now report, with some vagueness, that we’ll end on a very interesting note that’ll take the readers by surprise and leave them (and myself) wondering about what’s next for Etrigan and his host Jason Blood. So I’ve been thrown a bone of sorts.

DM: What of your take on The Demon would you hope would become part of the mythos?

JD: Well, I already know how it ends and which part of my story will play into the overall narrative of the character. I’d rather not spoil that for the readers. I’ll talk more about this when everyone knows how the series ends. If anyone still wants to hear it, that is.

DM: Allrighty. We’re due for a follow-up. When writing the mini-series, whose shadow did you most feel you were laboring under?

JD: Ahh, that’s an interesting question. Some heavy cats have worked on this character, but I’d have to say Alan Moore. Not in the sense that I want my Demon/Blood to act and talk like Moore’s, or even that I want to mimic his tone (that would be stupid, I’d just fail), but just in the sense that his Demon stories are so damn engaging. You read them and it’s just…it’s just, I don’t know how else to say it, every narrative beat is cool.

Fortunately what Pop and I are doing is totally different than what’s come before, not just with the story elements we’ve chosen, but in theme and pacing too. So it’s pretty liberating for me. If people don’t like it, it’s not because I was rehashing what came before. 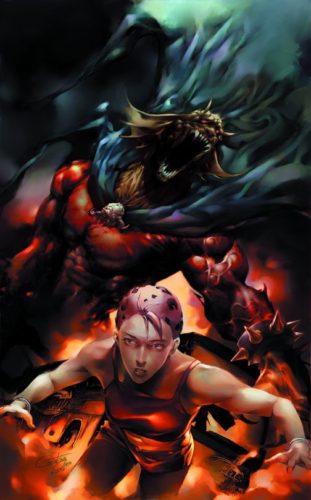 DM: Is there any difference in the way you approach writing for Pop Mhan and Tone Rodriguez?

JD: It changes the surface of the story but not the actual voice. Tone likes to draw big guys, so I stick big guys in there. I challenge Tone by making those big guys cry, or naked, or something, but they’re in there.

Pop digs drawing cars and girls, so I gave him a challenge in Ame, the drag racing yakuza chick. Ame’s sexy in a way that’s not so familiar to mainstream comics. She’s not all attitude, ass kickin’ and T&A, it’s her complexity that’s sexy, and I think Pop is really nailing that.

If the next artist digs the hell out of drawing window washers, then I promise there will be window washers in the story. They’ll be shoving heroin up their ass, but they’ll be there. Artists work too hard in this medium not to have fun.

My panel descriptions are always done in my style. Part of the joy of this gig is watching different artists interpret the text description of the images in my head. There is one artist I occasionally work with that I use an entirely different descriptive voice with. His name is Allan Gladfelter; he does a series called Lost Tribe. I often just give him a very poetic panel description with few concrete details and let him go nuts. It works out great.

DM: You originally pitched to DC for you and Tone to work together. Are you still going to try and make that happen, and either way, which character or characters would you want to tackle with him?

JD: I made Tone a promise once. Violent Messiahs was very much a collaboration, but it’s also true that Tone labored under my and Jan Utstein’s (editor) vision. So I promised Tone, probably while he was drawing something he really didn’t want to, like an amputee fetish scene or something, that one day he and I would do a project together where he was the creative director and I was his lackey. I aim to keep that promise. I can’t wait, it’s going to be an awesome creative exercise…whether that happens at DC or not, who knows?

I’d still really love to do RAGMAN with Tone. DC is hesitant about it though. I don’t know if it’s the character or my take, but you know…they’re not going for it…yet.

DM: Did your work on Violent Messiahs seem a natural segue into The Demon? Why or why not?

JD: I suppose so, to an outsider looking in, maybe. One thing that’s a little frustrating is that I executed VM in a certain voice and suddenly everybody wants me to repeat that hat trick over and over again with their characters. I don’t know if that’s what DC had in mind or not, but this Demon piece isn’t like VM. It’s faster, there’s less introspection. The desire to be meaningful is there, but it doesn’t have the same weight.

So while the dark aspects of VM may have made me seem like a natural fit, I’ve still managed to take this project in an entirely separate direction. I hope to go in other, more unexpected ways with future projects. We’ll see if I get that opportunity.

DM: Could Citizen Pain hold his own against Etrigan, or would it just be an immediate incineration?

JD: Yes, he could hold his own. Etrigan is a rampaging beast, but Job (Citizen Pain) is something else entirely. He’s meditative, precise and unrelenting. I think it’d be a pretty intense smack down. The difference is Citizen Pain, while being very tough, can and has died, Etrigan cannot. What a wacky fan boy question!

DM: Every now and then we have to throw a bone to the name of the site.