“In 1864, Japan was on the cusp of revolution.” So begins Alison Wilgus’ Chronin, getting readers up to speed on the necessary historical background. The basics of a civil war provide some context, but as volume 1, “The Knife at Your Back” unfolds, it appears there’s more than one revolution going on — one will open Japan to western ideas (for good or ill), and one may change the course of time travel. Wilgus may lure readers in with an intimate historical adventure, but it quickly becomes science fiction without missing an emotional beat.

From the sprawl of history Wilgus focuses on an apparent disgraced samurai, revealed as Mirai Yoshida. Literally named future, the ronin harbors more than one secret, becoming a bodyguard to a “tea mistress,” Hatsu. She, too, harbors a secret, and Wilgus uses this narrative to talk about class and racism in Japanese society. The story may be 150 years or so in the past, but as the Japanese government just recently addressed its treatment of indigenous people, its themes are as fresh wounds. 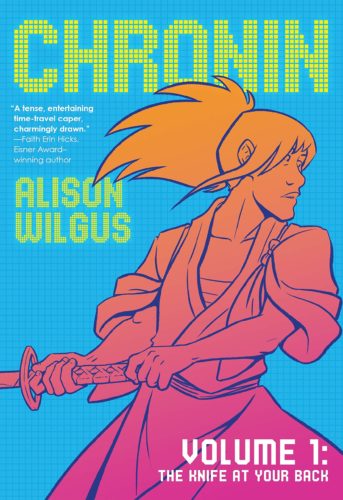 Mirai believes in a vision of Japanese history shaped by reading manga. It’s a little bit metatextual putting that in a graphic novel, but it also underscores how malleable history itself may be. Just because a book says it’s so, doesn’t mean that’s how it actually happened. Or that anybody was as noble (or ignoble) as stories portray them to be. Another time traveler, Kuji, has fallen into that trap. And as the two circle each other gingerly, their seemingly minor presence may alter history.

Done in modern graphic novel style, Wilgus’ brushwork dances on the edge of delicacy, paying homage to 19th Century Japanese art. Pages go by without dialogue, black-and-white drawings still pulling the narrative forward. The simplicity of the art helps keep us a little off-balance while also keeping the violence at a bit of a distance. It’s not visceral, because that would distract from the violence being done to reality.

It’s a clever time travel story, and, as mentioned above, part one of a two-part effort. Pick up Volume 1 now and savor it until Part 2 arrives in September, 2019. You’ll be in on an adventure that deserves your attention.