Last week, comics journalism kerfuffled and clucked over an alleged announcement from DC Comics at the ComicsPRO meeting. In front of a gathering of the majority of US comics shop owners, DC co-publisher Dan DiDio announced a reduction of titles, by about 10-15%. The rationale, it was believed, was that they were splintering the market too much by enticing with too much product. And yes, DC has certainly published a lot of extraneous books, as has Marvel. But that’s not the whole, clarified story.

Buried in that was an announcement that the line might be restructured a bit, with the experiment of 100-page Giant books exclusive to Walmart coming to an end, and brought to comics shops. (As we’ve predicted for a while, previous exclusive material would show up in trade paperbacks.)

DiDio had to clarify a bit this week on Facebook, and really, the new reality makes sense. (Not to be confused necessarily with the new continuity.)

First, the reduction in number of titles has already been done and offset by the Zoom/Ink imprints aimed at the middle-school and YA audience — and likely also including Brian Michael Bendis’ in progress “Wonder Comics” imprint, of which you should be reading all four titles. And they’re not ending the 100-page Giant program with Walmart; DC is just finally making those books available to comics retailers. They’re successful. And they’re getting better. As DiDio put it:

Successful and continuing. For those fans of the DC Giants at Walmart, have to clear up some misinformation making the rounds. Just want to let you know these books are doing well, so well that we are looking to expand the number of original pages in each book and include distribution to the direct market. Look for these and new titles later this year. The promise is to keep it one of the best values and reading experiences in the market. Best, DD 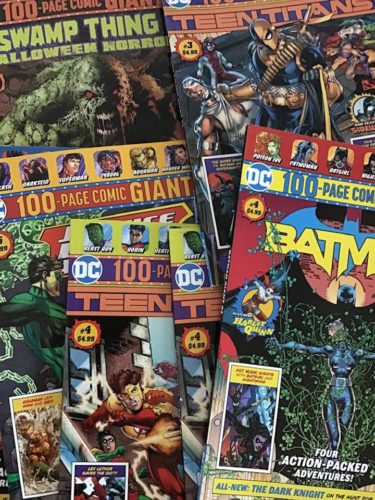 I won’t call this a game-changer, but it’s a step that needed to be taken. Put aside your feelings about Walmart in general for a moment. For all the good intentions of the Walmart program, it didn’t work out the way it should have. Yes, new readers in areas without comics shops got the books, but some of the material wasn’t as “family friendly” as some assumed. And retailers sent out groups to buy up copies for their stores at a mark-up, so that wasn’t what DC had in mind. Then, as we discovered before a recent podcast, some urban and suburban areas simply didn’t get the books at all, even if a Walmart was around.

Currently, DC has six titles being distributed as 100-pagers, with new stories by some of their top talent. So those stories need to show up as trades for the direct market, without sacrificing the outreach that the program was meant to do. DC has been working hard to get new readers, and should be applauded. (Marvel has been making efforts, too, selling 3-packs of recent comics bagged together at Walmart — but their efforts also bizarrely include licensing titles to IDW.)

100-Page Giants are good bargains, and if curated well, the reprints can be a magical gateway for new readers. Some of my favorite books as a kid were 100-pagers of Batman Family, Detective Comics, and Justice League of America. Thanks to the reprinted material, that’s where I discovered Dick Sprang’s artwork, the Elongated Man, and both the Justice Society of America and the 7 Soldiers of Victory. While that may not be where DC plans to go with these books, I hope they do dig deep and introduce kids to their rich legacy — go back more than 10 years.