“They’re coming to get you, Barbara…”

If you know one thing about Night of the Living Dead, it’s that iconic line. Okay, you know it’s also about a zombie attack, so you know two things. And that line pulses with dramatic irony, as, of course, Johnny says it right before a ghoul attacks his sister Barbara. 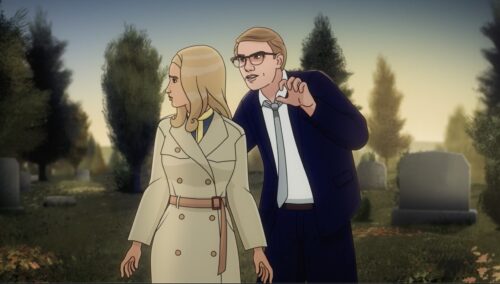 In Warner Animation’s Night of the Animated Dead, Jimmi Simpson delivers the line perfectly. It’s disturbing, has that Boris Karloff/Zacherley vibe, and promises the most frustrating thing about this film. It’s really well acted, particularly by Josh Duhamel getting to step out of his usual rugged role and into the slightly shlubby Harry Cooper. Animation will do that for you, allowing an actor to play against type with character design instead of make-up. Though Dulé Hill doesn’t get as much of a stretch as Ben, he’s still really good. It’s a great cast, including genre icons Katharine Isabelle and Katee Sackhoff.

Thanks to the original film being in the public domain, they’re working from a great script. Though George A. Romero and John A. Russo wrote it in 1968, it still resonates. It’s still scary. What this production doesn’t have is a great reason to exist. There’s no twist, other than director Jason Axinn cranking up the (animated) gore. For most intents and purposes, this is a shot-for-shot remake of the original, just in color and frankly, weakly animated. However, it does prove how iconic and powerful the original is — because even if you’ve seen the original only once, you can still recognize how much this remake owes to it. So much from Romero’s original direction has become burned into popular culture. 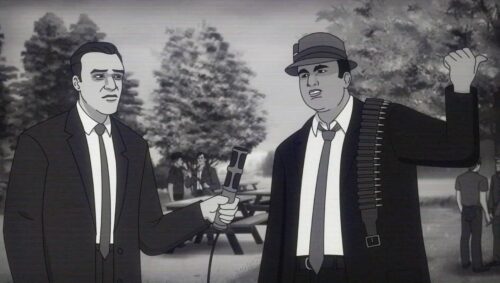 In theory, I’m not against remakes. As a fan of live theater, I’ve watched a dozen or so interpretations of Hamlet and Macbeth (and directed one set against Clive Barker’s Hellraiser universe). New ideas and new viewpoints can be brought to old scripts. All Axinn does beyond the gore is illustrate one scene Ben only described originally — and his illustration then contradicts later plot points — and “bring life” to the stone cold devastating ending that kind of kills its original power.

And as always when talking about it, I give a tip of my fez to Bob Wilkins, the host of Creature Features on KTVU in the 1970s, for showing Romero’s classic uncut one late Friday night and scarring 11-year-old me for life.