Aliens. Dinosaurs. Misunderstood monsters. And, oh, those dinosaurs. Icons of Darkness in Hollywood has them all — and some superheroes, too. Rich Correll has spent a lifetime collecting and preserving costumes, props, figures, and more from Hollywood’s greatest horror and science fiction films. When he was too late to do so, Rich Correll commissioned top artisans in the film industry to bring famous monsters back to “life” for his collection. (The Creature from the Black Lagoon on display is not from the film; it’s a piece that Correll had created for his friend Hugh Hefner, and it lived in the Grotto of the Playboy Mansion until Hefner’s passing.)

Though he went from child actor to successful writer and director (among other things, he created “Hannah Montana”), Rich Correll’s greatest impact on the culture may be as the curator of a burgeoning Hollywood Horror and Science Fiction Hall of Fame. “Icons of Darkness” offers a small but impressive taste of his collection, which he claims fills a warehouse. You can currently visit it at the corner of Hollywood and Highland, right near the famed Chinese Theater. 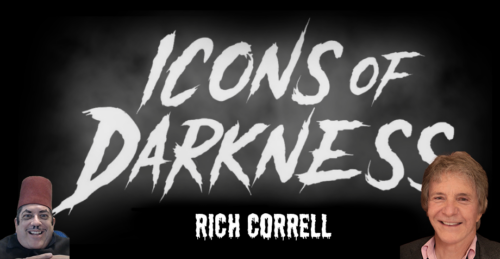 When a publicist reached out and invited me to check it out, I thought I would be lucky to get a few minutes interviewing Correll. I did get that, but I also got a personalized walk through the collection. We geeked out. I was able to talk fan to fan, and there’s no doubt Rich Correll is a fan. He knows every inch of his collection, inside and out. At this point in his life, he wants everyone to be able to enjoy his toybox, and dreams of the day we can call it “ours” at that Hall of Fame.

I can’t guarantee you’ll get the tour I got, but you can see Correll’s collection by buying tickets here.
Mister Macabre theme excerpted from:
March of Midnight by Scott Buckley | www.scottbuckley.com.au
Music promoted by https://www.chosic.com
Attribution 4.0 International (CC BY 4.0) https://creativecommons.org/licenses/
Fanboy Planet animated titles by Mark Teague at Dreamhaven Studios