Faithfully adapt a comic book to an audio drama? Just to add weight to it, adapt one of the most beloved series of comics’ modern era? You must be dreaming. And yet director Dirk Maggs has done just that, collaborating with Neil Gaiman to bring The Sandman to life through Audible Books.

Covering the first three arcs from Gaiman’s Vertigo Comics series, this massive undertaking strikes an interesting balance between drama and panel description. Gaiman himself narrates, reading from a script that borrows from the original pages he sent to his collaborators, Sam Kieth, Mike Dringenberg, and Kelley Jones, among others. As he describes the settings, Maggs intersperses dialogue, music, and sound effects to bring this classic to often disturbing life. Occasionally, the narration shifts to different points of view — we hear from Taron Egerton as John Constantine, for example, describing his take on goings on a little more fulsomely than he might in comics.

It’s a faithful adaptation, ending in 1989, so some of the attitudes are of their time, though certainly progressive for their time. But that shouldn’t get in the way of enjoying this. Listening to it was a reminder to go back to the comics collection and pore over the way it was all laid out page after page. And some of it also brought much more to life, finding new angles on text (and subtext). Sequences with the Corinthian and Doctor Destiny are far more horrific than I remember them being when I read them, because without artwork to guide me, sound effects often lead me into more horrible places in my imagination. (Not once did it occur to me to ponder what the Corinthian’s eyes would sound like when I read the comics.)

With Doctor Destiny and Constantine, it’s clear that at least these first arcs sit firmly in DC Comics’ continuity. Yet not knowing who Wesley Dodds is in his brief appearance doesn’t take away from the thrill of it, and you don’t have to know the convoluted backstory of Hector and Lyta Hall to appreciate their key roles in the second major arc, “A Doll’s House.” Nor do you need to know how Matthew (Andy Serkis) ended up as a Raven. (If you’re interested, that spins out of Alan Moore’s run on Swamp Thing.)

It’s also interesting to hear these characters in accents that mostly were intended by Gaiman when he wrote the original comics. Though Kat Denning’s Death is firmly American and sounds much younger than Shey Grayson’s Rose Walker, the rest of the Endless have vaguely educated British accents. Serkis makes Matthew sound fairly working class American, slightly jarring from his former life as a government agent. And Riz Ahmed’s take on the Corinthian — in that case, it’s pretty much exactly how I thought he sounded. 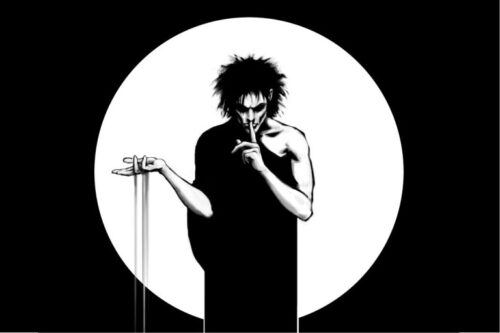 It’s James Macavoy as Morpheus, the Lord of Dreams, who tackles the most complicated role and unlocks interesting depth. There’s arrogance, nobility, self-deception, petulance, and despite Morpheus’ insistence otherwise, a terrifyingly real and inconsistent humanity to the character. The story of The Sandman is, after all, about how much an immortal still has to learn, and Macavoy inhabits it perfectly, aided by smooth editing and jumps to other points of view.

If you’ve never read The Sandman, by all means do, but this audio drama is a good way in, and no matter what happens with artists’ abilities to gather again, this is proof that we can and should have an audio drama resurgence. (Macavoy, at least, recorded his role entirely in isolation — and it’s still skillfully engineered and directed.) Someday, there’s a TV series coming to Netflix, and it won’t be quite as faithful — Gaiman sees it as an opportunity to rethink much of it, in terms of what if the events were happening today instead of the 1980s. Audible’s efforts here prove there’s still some value in it being a period piece. Because as that, it’s still a classic.