For years, Red 5 Comics has been putting out interesting books and, like a lot of small press publishers, struggled to get noticed. For ComicCon@Home, they have the opportunity to team with a few other quality publishers and hold a panel discussing what they have to offer — when you consider these include SourcePoint Press, Aftershock Comics, and Madcave Studios, you might find a panel that has something for everyone’s taste in comics. That’s Saturday, July 26 at 5 pm Pacific at the ComicCon@Home YouTube channel.

More directly, I’m intrigued by their ComicCon@Home announcement — that they’ve got a book moving a King Features character forward. Many publishers including DC Comics have teamed with King Features to redefine/redesign their classic properties, and Jeff Parker took a mighty stab or two at it with Dynamite Comics. But to take this no-brainer — what’s up with the descendants of an original — I’m not familiar with any other efforts. (And interesting that it means at least Mandrake is no longer in Dynamite’s hands.)

Considering that one of DC’s most beloved characters is Zatanna, daughter of the Mandrake clone Zatara the Magician, The Legacy of Mandrake the Magician seems long overdue. I’ll be checking this one out.

Mandy Paz is by all appearances an ordinary teenager just trying to make her way through high school. If she seems like she’s going out of her way to avoid attention, that’s because she’s hiding a big secret—she has powerful magical talents. So, when strange and sinister things start happening in her small town, Mandy decides to take action. And on her quest to chase down the root of the town’s trouble she just might discover the truth about her own legacy.

King Features, Red 5 Comics, and StoneBot Studios will cast a spell this October as they present a new take on the classic comic strip Mandrake The Magician in an all-new comic book series! This expansion of the original Mandrake universe stars a new generation of heroes as they face off with familiar foes.

Red 5 also has a couple of exclusive comics for ComicCon@Home available at their online store. 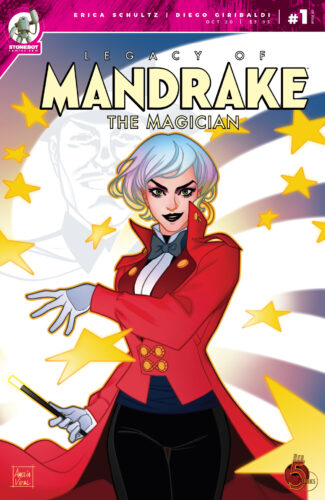