I have no doubt these stories had already been scheduled when the news hit Saturday that comics artist Bernie Wrightson had passed away. But as we all celebrate his prime years from Swamp Thing to his collaborations with Stephen King, Steve Niles, and most importantly his own imagination, it’s kind of cool that we’re on the cusp of revisiting work from before then. It feels like he was fully formed right out of the gate.

These stories weren’t so much “lost” as never given much circulation originally, coming from black and white fanzines. Papercutz will be presenting them for the first time in color. 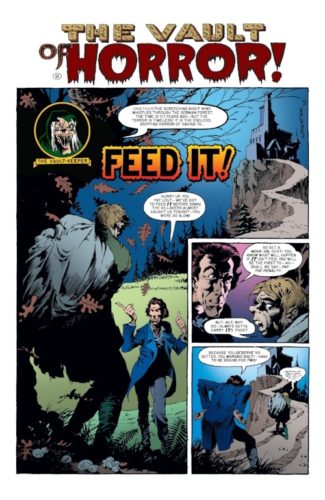 Both stories were originally published in 1970. The four-pager “Stake-Out” first appeared in the second issue of a magazine called I’ll Be Damned. It’s absolutely appropriate to finally appear in Tales From The Crypt, as it’s very clearly meant to pay tribute to the original EC books. “Feed It” appeared in Web Of Horror #3. Both fanzines offered Wrightson a place to work on his talent but you’ll see… it was already there. What a tremendous artist, and what a tremendous opportunity for Papercutz to represent these stories.

The entire comics industry was saddened to learn of the passing of legendary comics artist Bernie Wrightson this past weekend. Wrightson’s name was synonymous with the best the horror comics genre had to offer and he often spoke of the lasting influence EC comics titles such as the original TALES FROM THE CRYPT and VAULT OF HORROR had on his work.

So, it seems only appropriate that two of Wrightson’s stories are included in Super Genius’ new revival of the TALES FROM THE CRYPT series.

Issue #2 (in comic shops this Wednesday) features two “lost classics” from Wrightson, “Stake Out” and “Feed It!”, both appearing in color for the first time. The two stories had originally appeared in black and white in other publications but when CRYPT editor Jim Salicrup remembered the twist ending of “Stake Out” he knew he had to have the story for this new series. “Feed It!” followed naturally. 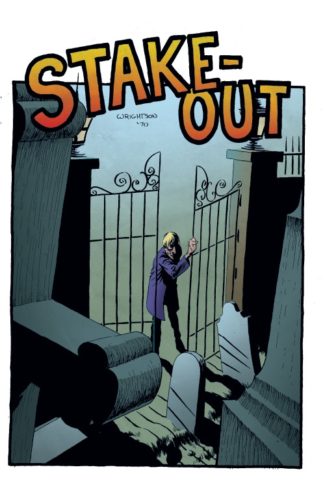 As Salicrup explains, “Bernie has always set the bar for horror in comics and since he was a lifelong fan of EC Comics, I wanted to find a way for him to be part of this new incarnation of TALES FROM THE CRYPT. I knew Bernie had retired from drawing but when I remembered these stories, it seemed like the perfect way to have Bernie be a part of the comic. Luckily, he and his wife Liz agreed and as a result, we all got to see these stories from one of the finest horror artists who ever lived appear under the EC banner.” 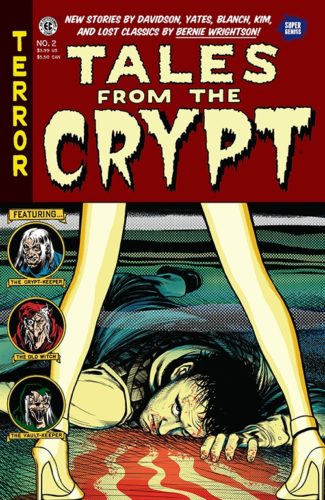 “We’ve been delighted by the response to the first issue of TALES FROM CRYPT (which sold out),” noted Super Genius publisher Terry Nantier. “I’m happy to say that orders for issue #2 have been even higher. And #3 looks like it’s continuing that trend. There’s obviously an enduring passion and enthusiasm for all things EC and we’re happy to be carrying on that legacy. I think fans who haven’t had a chance to give the new series a try yet will be happy to discover that we’re maintaining the spirit of the original series. I’m very sorry Bernie wasn’t able to see these final stories actually appear in print but I hope that they’ll be another way fans can appreciate the legacy of this uniquely talented artist.”