Editor’s note: Drew Simchik originally contributed this on 11/19/13, to get people revved up for Doctor Who’s 50th Anniversary. The time has come to rev up for the return of Peter Capaldi on April 15. Part 1 of Drew’s retrospective is here.

We should probably think of this project as “50 OF my favorite stories,” and not “my 50 favorite stories.” As predicted, I’m already second-guessing the list; I’ve watched half of “The Mind of Evil” for the first time in at least 20 years and I’m enjoying the hell out of it. Jo Grant has one kick-ass moment in particular where she disarms a convict trying to take over a prison, and then there’s the Doctor charming the Chinese delegate by displaying his command of language and culture. It’s marvelous, and would probably have knocked something else out if I’d seen it last week.

But that’s the way this goes, and I’ve omitted a bunch more terrific stories along the way. So these aren’t the only ones you should ever watch — just the ones that have stuck with me over the years for various reasons.

One warning for classic Who newbies: we are now getting into an era of the show where consensus over what’s good and bad starts to diverge a bit more than in the previous installment. To my mind, that’s part of the fun, but caveat emptor.

Image of the Fendahl
“Horror of Fang Rock” is great and all, but for some reason it feels like a chore even to think about watching. I’ve always preferred this mix of ancient Lovecraftian horror, Quatermassive techno-fear, and von Danikenesque alien influence. It also taught my younger self the vocabulary word “gestalt.” 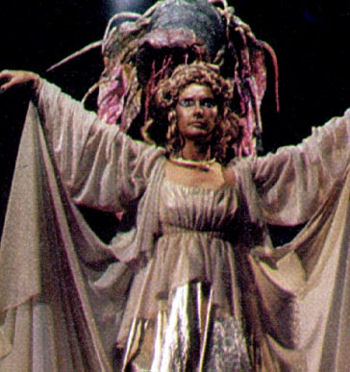 The Stones of Blood
Another top 5 contender for me, depending on when you ask. A (rare) mostly-female cast, a pagan goddess story that turns into a courtroom drama, and yes, the monsters that scared me most as a child. The Ogri are basically polystyrene rocks that glide across the ground and suck your blood, but to a ten-year-old sleeping on his grandmother’s living room couch and watching this late at night, there’s no doubt these things could come crashing through the windows any second. My favorite Key to Time segment, and a treat every time.

The Nightmare of Eden
I hesitated to put this on here, but it’s marvelous fun. There’s a giant TV screen featuring slices of planets you can just walk into (though you shouldn’t), drugrunners loose on a pair of ships that have accidentally intersected one another in space, and one of the most outrageous mid-European accents in the entire series. All that AND a race of rampaging monsters even more huggable than the Adipose. Even people who hate this story want a stuffed Mandrel toy to cuddle when they’re feeling under the weather.

The Horns of Nimon
Probably my fourth WTF in a row from the conventional fan majority. “Nimon” drags a little toward the end, yes, an observation about classic Who stories that’s on par with “lakes tend to be wet toward the middle.” But we have Romana — hands down my favorite companion ever — out-Doctoring the Doctor, an incredible over-the-top performance by almost-Doctor Graham Crowden as Soldeed, a plot charmingly stolen from Greek mythology, and a minotaur design that’s both laughable and utterly amazing. I love it. 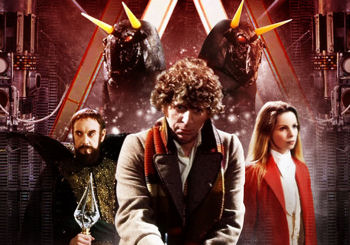 The Leisure Hive
The 80s arrive in style to Doctor Who. I love the mood set by the long tracking shots and space dock sequences, I love the bee-inspired Argolin costumes, I love the attempts at scientific relevance (tachyonics). A frequently underrated story.

Full Circle
This felt like “my” story in so many ways when I was a kid. It was written by a teenager with my first name, it introduced a new teenage male companion who vaguely resembled me (good in school but with an uneasy relationship to authority, plus a youthfully rounded face and dark mop of hair), and it dealt with evolutionary biology in a science-fictional but reasonably intelligent way. All this AND oversized spiders. The spiders look worse today than they did back then, but everything else just looks better and better with age.

The Keeper of Traken
Really, this whole season is fantastic; I could just as easily have included “State of Decay” or “Warrior’s Gate” here instead. At the time I loved the concept of the evil statue frozen in place by the benevolence of Traken society, yet still corrupting those around it with its sinister influence. This is also the beginning of one of my favorite three-part sequences in Doctor Who history, centered around the Fourth Doctor’s regeneration. 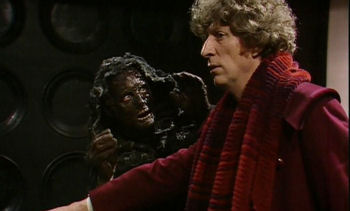 Logopolis
Despite some stiff competition, Tom Baker’s still my Doctor, and perhaps the only one I’d fully trust to get me out of any situation no matter how threatening. So you can imagine how this episode gripped me: the indomitable Fourth Doctor, one step behind the Master, one wrong foot away from falling, and knowing it the whole time, pursued by dread and a mysterious figure in white. The ominous atmosphere and regeneration sequence are only half the story; the rest is a perfect blend of science and magic centered on a race of mystics who recite numbers that make (or unmake) the universe. This and the next story make my top 10 for sure.

Castrovalva
You think the danger’s over once the Doctor regenerates, but it’s still looming, and the Doctor’s barely able to hold it together in his brand new (young, desperately vulnerable) form. The first half is three young inexperienced companions in the TARDIS trying to save themselves and their suddenly helpless father figure, and the second is one of the most utterly gorgeous, weird, Escheresque planets in Doctor Who. And the music is probably my favorite of the whole 50 years. 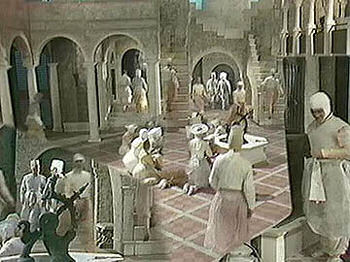 Four to Doomsday
I’ll never understand why people hate this story so much. The plot holes? The physics? Adric’s disappointing gullibility? None of those ever bothered me in the slightest. Ranged against those far from unusual flaws we have a story filled with the most appealing ideas and imagery, including people stored on microchips who can be transplanted into any body (which can be 3D printed from line drawings if desired), and aborigines, Mayan princesses, Chinese dancers, and Greek philosophers traveling on spaceships together. I couldn’t defend it as a great story, but I love it.

Black Orchid
Most people hate this one too, and it’s harder for me to explain why I like it. Maybe it was the drawing-room mystery plot, or the incongruously grim secret of George Cranleigh and the murders that threaten to reveal it, or maybe it was Sarah Sutton getting to branch out a bit from Nyssa and play a more central role.

For me it’s a nice little story that doesn’t outstay its welcome, and could work exceptionally well in the new series if you made a few changes, such as making a main character into a wasp and swapping out a cricket match for several too-on-the-nose scenes with Agatha Christie, just to toss out a few random ideas. 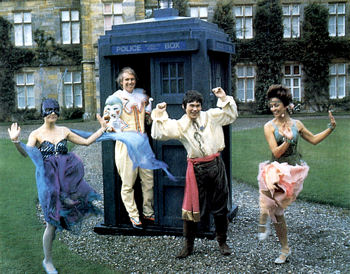 The Caves of Androzani
Everybody loves this, and it’s just as good as they say. It would rank higher on my list of favorites if it weren’t so monomaniacal about men and their guns; instead, I admire it more than I enjoy it. Season 21 felt like the beginning of the decline of the classic series for me, and this the last great story, all the more depressing for being the last. There’s some very good stuff later, but I could never shake the sense that it was too late. “Feels different this time,” indeed.

The Two Doctors
I like Colin Baker’s Doctor more and more as time goes on. I imagine if I were ever to play the Doctor (I’m not qualified, for the same reason Schwarzenegger isn’t qualified to be President) I’d probably be closest to the Sixth in temperament: arrogant, bombastic, belligerent, moody, yet fiercely protective of the innocent, of beauty and poetry. It’s a shame so many of his stories were so awful. There are a couple more I can watch with some small pleasure, but this is the only one I come close to loving. It’s not the presence of Troughton and Hines, though that adds to the fun. Instead it’s John Stratton and Jacqueline Pearce; the return of Sontarans who can be taken seriously (by me, anyway); and the beauty of Seville. A great location shoot hides a multitude of sins, though I think this story’s are overstated by fans. 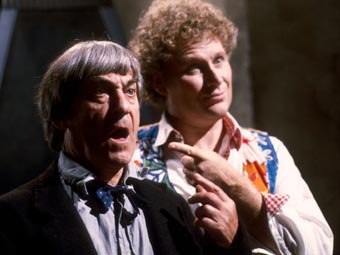 The Happiness Patrol
There are other McCoy stories I like — “Remembrance” is overrated but still good, “Survival” is haunting and eerie — but when picking favorites I tend to go for the ones only he could pull off. This is one of them: bright pinks and neons plus the most absurd monster of the classic series candy-coating an up-to-the-minute story about a totalitarian regime in which not being happy is punishable by death. It suffers slightly from the Seventh Doctor’s habit of rushing about as a sort of narrator figure rather than being seen in any real danger (see also “Ghost Light”), and the “end my life” speech is maybe half as good as it’s cracked up to be, but Doctor Who would be the poorer without this type of story.

The Greatest Show in the Galaxy
Another one that really only works with McCoy. When I was a kid, this story wormed its way into my subconscious, and I dreamed a version of it that my mind so distorted that I had gotten halfway through writing my dream down as a short story before realizing where it had come from. I hate circuses, I’m creeped out many of the characters (even some of the ones I’m supposed to like), and I don’t like it when shows bite the hands that feed them (ask me about Toy Story 2 sometime), and yet I still think this is brilliant. 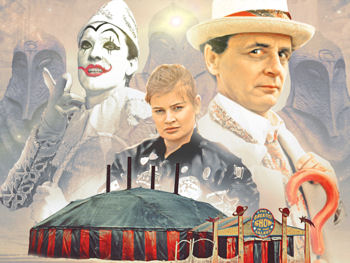 So there you go: my classic stories, minus those that made my top 5. Next: the new series!