And now, we’re entering that tricky point in Star Wars mania — the slate was largely wiped clean, and slowly, slowly, new canon was to be introduced. Because of mammoth popularity, however, the trickle feels like a fire hose. How do you tell a compelling story about a character in the biggest movie in the world without tripping up over things that have yet to be developed for Episode VIII (which, by some reports, is being revised to downplay planned new characters in favor of focusing on Poe, Finn, and Rey)? You make it a prequel — and if you’re sharp, you might want to catch that mini-series Shattered Empire that introduces Poe’s parents!

With Charles Soule and Phil Noto as the creative team, it’s likely to be a good book; just don’t go looking for answers or character arc that will affect the movies. Even as a prequel, this should just be fun stuff that’s reminiscent of Rogue Squadron. I know quite a few people that would enjoy that.

Strap in and lock your s-foils in attack position because one of the breakout stars of the blockbuster Star Wars™: The Force Awakens is coming to comics! Today, Lucasfilm Ltd. and Marvel Entertainment are proud to announce STAR WARS: POE DAMERON #1, a new ongoing series coming this April! Superstar creators Charles Soule (Lando, Obi-Wan and Anakin) and Phil Noto (Chewbacca) take you to a galaxy far, far away for the new adventures of Poe Dameron – former Republic flyer turned Resistance fighter and the best pilot in the galaxy!

“With Star Wars: The Force Awakens exceeding expectations the world over, it could not be a better time to be a Star Wars fan,” says Marvel SVP Sales & Marketing David Gabriel. “And with Poe Dameron being one of the breakout stars of the film, we’re thrilled we get to continue the story of this fan-favorite in the comics. Expect a series with the same high benchmark of quality as our recent Star Wars titles.”

Set before the events of STAR WARS: THE FORCE AWAKENS, be there for Poe’s daring adventures as they take him to the edges of the galaxy and back. Hand-picked for the Resistance by legendary General Leia Organa, follow Poe, BB-8 and a squadron of X-Wing pilots on a top-secret mission that could hold the key to saving the galaxy. But with the full might of the First Order on their tail, will the operation be short lived?

Can’t get enough Star Wars? Get your astromech droid and hop in the cockpit of your X-Wing, because you won’t want to miss this one! This April, learn more about the Resistance’s aerial ace when STAR WARS: POE DAMERON #1 comes to comic shops and digital devices! 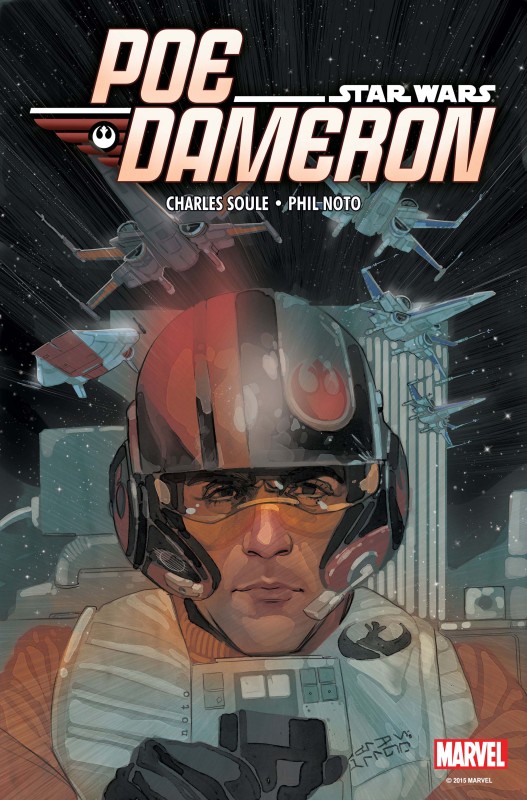 On Sale in April!