Now that I have established my impartiality, let’s talk about why.

Punch Club is a loving pastiche of 8-bit games, adventure, role playing, sports-management, and chiptunes all rolled up into one narcissistic avatar’s fever dream.

You play as…whatever you name your character. For the purpose of this review, we will say…oh, let’s call the character Budiak. 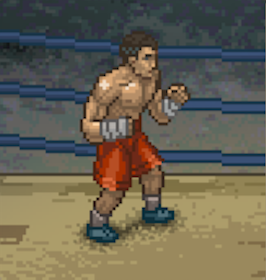 Budiak’s father was…kind of a badass. He punched, dodged, kicked, and punched his way to fame. He walked around all over town with no shirt on and nobody seemed to notice.

Then one night, Budiak’s daddy gets Thomas Wayned in an alley by a man with a glowing red eye. 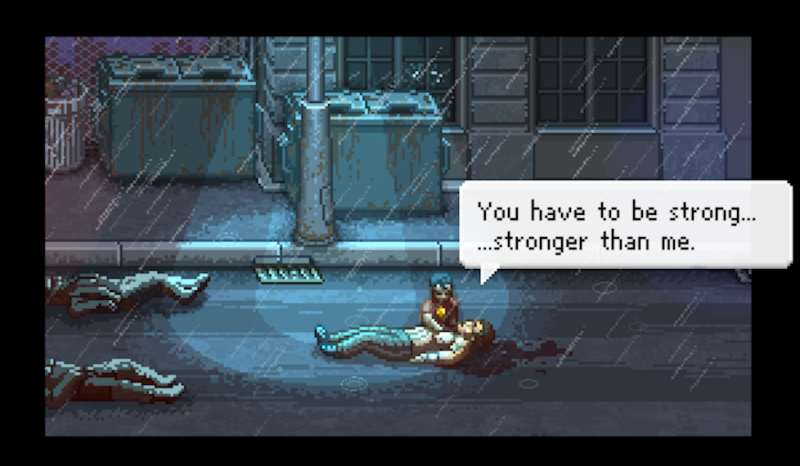 He did not leave his son much, except an obsession with acting tough, a snarky attitude in the face of abject failure, and the guts to keep trying even though he really sucks. 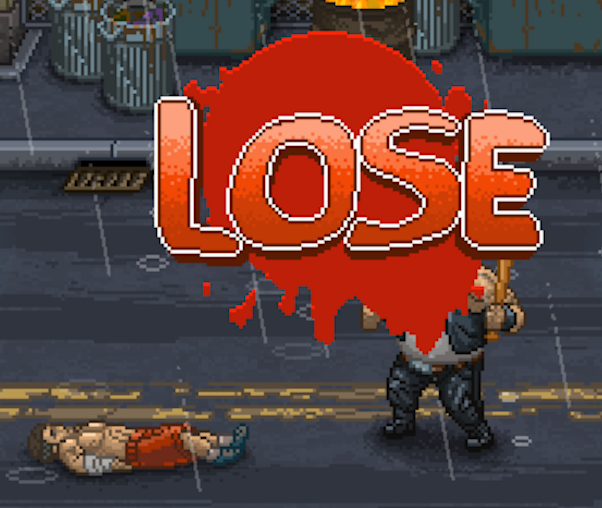 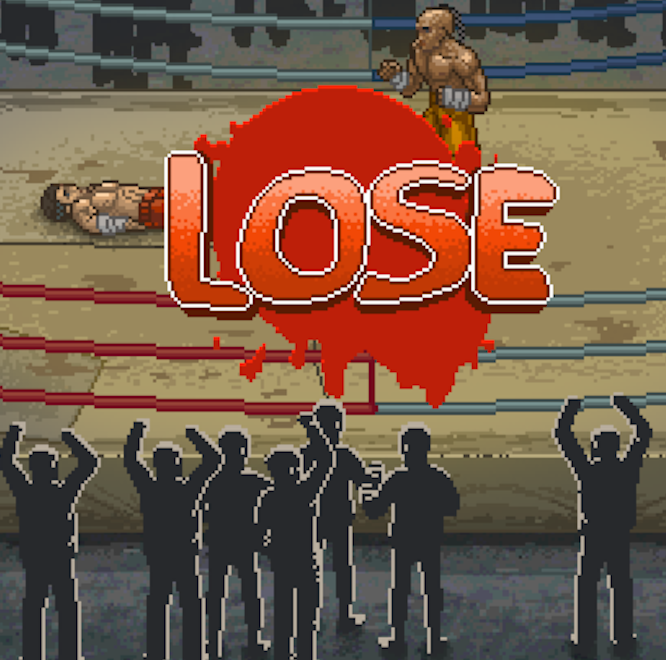 …And that is what makes Punch Club so endearing. It is a game that forces you to live a life. Unlike most fight-management games, you actually have to spend each waking moment of each day sleeping, eating, working to make money to buy food, working out, and “chilling”. 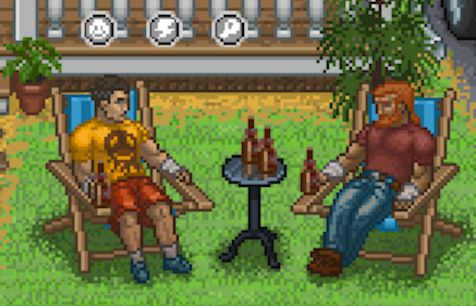 Each action you take has an effect on your four resources: health, food, mood, and energy. Go deliver pizzas for a while and you get $30 bucks- but you spend valuable time, energy, food, and mood. Lay down to sleep and you regain energy, mood, and health, but burn food and time at high rate. Lose a fight and you lose mood, energy, and health.

On fight day, however, it behooves you to have those resources maxed out, because they all affect your in-fight abilities. That is a no-brainer. That is also easier said than done. Much, much easier.

And, of course, there is training. Exercise increases your three attributes: strength, agility, and stamina, and each exercise affects those attributes differently…it also takes a lot of time to exercise. Strength increases damage per hit, but consumes more energy during a fight. Stamina increases your energy regeneration during a fight, and agility increases your ability to avoid enemy attacks and gives your own attacks more accuracy. 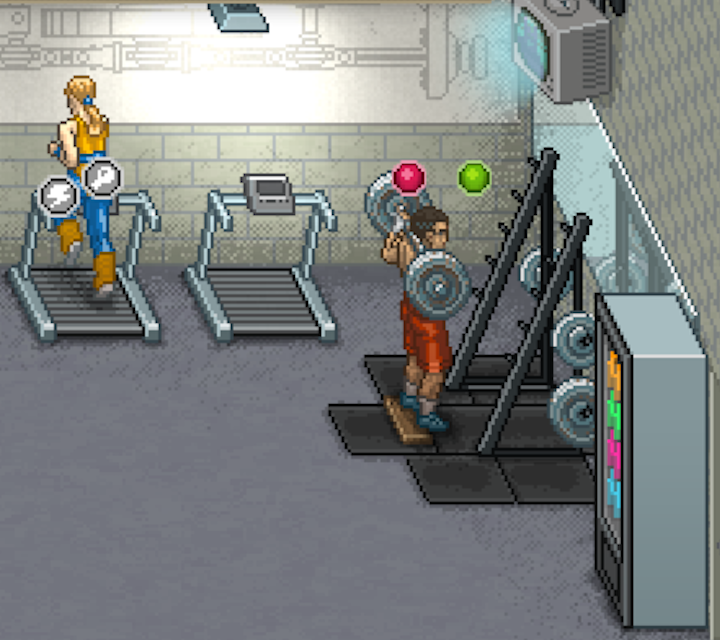 If this all sounds complicated, it is. The entire game is a delicate balancing act between training, working, resting, chilling, and fighting. The truth of the matter is that fighting is the least of your worries.

Halfway through this writing, I found Budiak two months into his journey with a record of about 7-10. That, my friend, is the brilliance of Punch Club. You are working and fighting and scrapping just to get a piece of the pie. In a way, Punch Club is not a fight simulator, rather, it is a life simulator. Along your travels you make friends, find love interests, run into sketchy characters behind bars…and you even fight ne’er-do-wells in convenience stores:

Budiak is constantly broke. He has won a few fights in the underground “Ultimate” league, but loses as many as he wins- and is often nursing a concussion, which makes his physical training less effective.

Then, Budiak looks in the fridge and sees that it is empty, so he has to go to work at the construction yard. 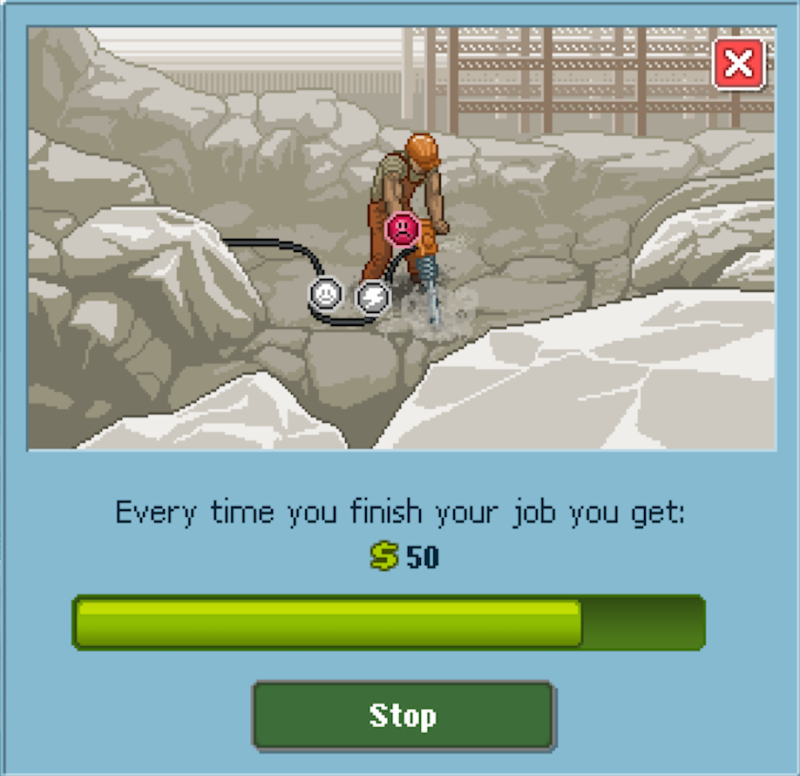 …but that saps his energy, making him more hungry, and as you can see from the frown faces flying out of his body, it saps his very will to live. So Budiak spends his money on food, and goes to sleep. At this point, Budiak has not fought or trained in two days, and his lethargy costs him valuable attribute points, which bleed away day by day.

Punch Club is a crude, yet forgiving, lover. The game gives you very little direction, while at the same time giving you a long, looooong leash on which to hang your 8-bit self.

Budiak himself, meanwhile, is a charming, if not clueless lunk, who floats about his neighborhood threatening people, getting his butt kicked, kicking butt, attempting to charm women, and looking for his next meal.

Oh, yeah, I forgot to talk about fighting.

Unfortunately, the fighting is the most perplexing, enigmatic part of this game. Take heed, my friend, you will scream at your screen when playing this game. You work so hard, plan your schedule, work double and triple-shifts at the construction yard or the yeoman task of delivering pizzas to buy food and gym time, just to get positively trounced in a fight against what should be an utterly inferior opponent.

Fighting is not controlled- it is merely a very highly evolved form of Giga Pet combat, where you prepare as best you can and choose the moves to employ during the fight, and the fight plays out based on your stats and moves against the other’s.

After each fight, you get a detailed graph that I have absolutely no idea how to read. 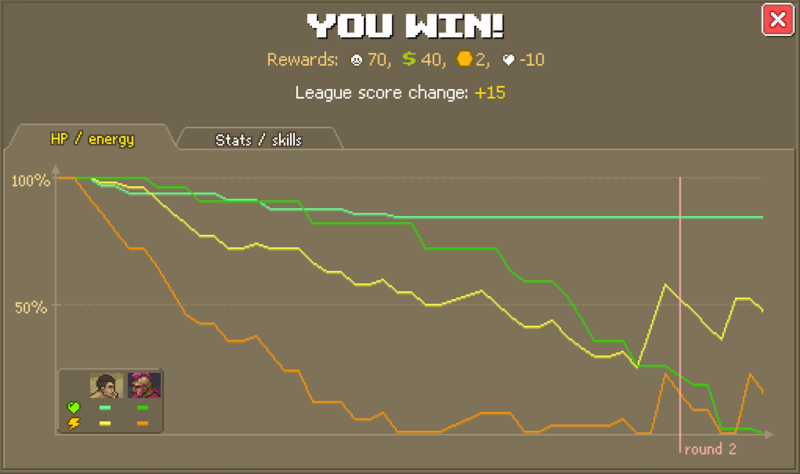 This, my friends, is where that Learning Curve kicks in. The game stresses the fact that you cannot be a jack of all trades, and urges you to specialize in one method of fighting, strength, agility, or stamina.

One day, after losing about eight fights in a row against various hobos and drifters from the area, I got a phone call at my squalid dwelling. My compatriot advised me to not be afraid to “change it up” if my strategy was not working.

So I took that humongous leash, stretched it out, and went on hiatus. Instead of attempting to fight every few days while forcing workouts in between, I went on a sabbatical. A butt-kicking, weight-lifting, steak eating, up-changing sabbatical.

I started by forsaking my physical condition to work double and triple shifts at the construction yard, earning enough money to buy my own workout equipment, which allowed me to save gym money for more meat. 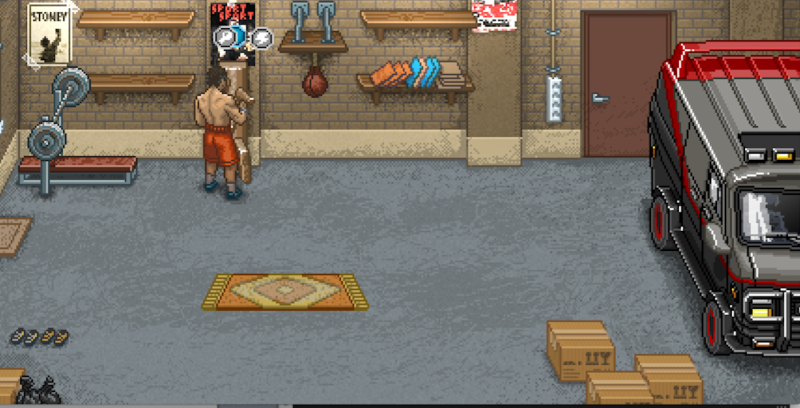 After six weeks in game time, I had completely switched up my whole fighting style. I had my strength at 10, agility at 5, and stamina at 4, and focused on hand strikes instead of a mixed punchy-kicky style. I had not fought in a while, when my chance came during a late night pizza delivery.

The resemblance of a walking, talking, bandana-emblazoned mutant ordering pizza is no mistake, my friends. This game is God’s gift to ’80s nostalgia, and He chocked it full of enough sly throwbacks and references to satisfy even the most curmudgeonly 34 year old.

The fight went swimmingly. My gamble paid off. 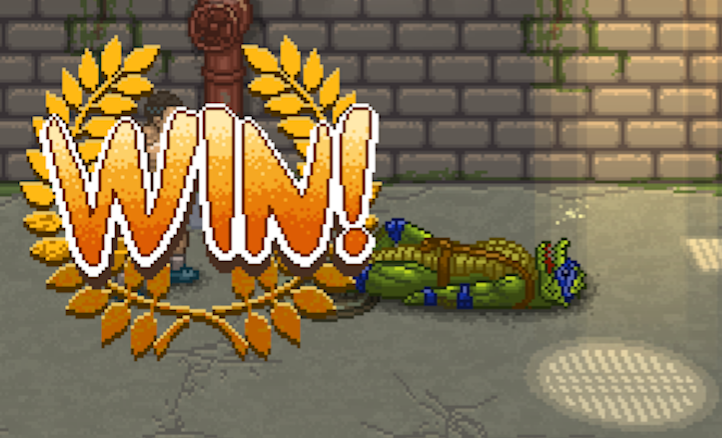 Let me ask you a question. When was the last time you played a game that allowed you to take a tactical pause, mid-game, just to figure out what was going on? And then once you figured out your strategy, you took the steps to work toward that new strategy, all the while still playing the game?

Make no mistake; this game is not perfect. The utter lack of documentation is at times baffling, and the fight system is, for the most part, a bit understated. I do not think, however, that that is by mistake. It is clear that this game is not exactly about fighting. This is a game that revolves around a lifestyle. It is a game that illustrates the struggle toward greatness, albeit in a somewhat fantastical manner…even though it would be nice to be able to skip through speech bubbles a bit faster.

Punch Club packs a surprisingly large amount of gameplay into a sub-$10 package. For reasons of uncanny depth for such a simple concept, replayability, and freedom of action, Punch Club is absolutely worth checking out.