On last week’s podcast, I mentioned that Marvel had released an image of young superheroes with a sign saying “I quit.” I speculated then that they would form a new super-team with an old name that needed a trademark renewal. Was it time for Young Avengers again? Well, my reasoning was right but the title was wrong. It’s actually a team name with a bit of an awkward history.

The original Champions had a 17 issue run, featuring Hercules, Black Widow, Ghost Rider (?), Angel, and Iceman as they fought villains in San Francisco. Marvel tried to revive the concept — though not the original team — a few years ago, but ran into some trouble when it turned out there had also been a popular RPG called The Champions, and that might have a stronger claim to the trademark. (It’s no small matter — this is why DC had to throw in the towel with their Captain Marvel and officially change the character’s name to Shazam. But everybody still calls him Captain Marvel.)

So either something worked out, or there’s a fine point of law where if you remove the article, it’s enough. Because this team isn’t called THE Champions; they’re just Champions. And actually, yes, they are. Putting Ms. Marvel, Spider-Man, and the Totally Awesome Hulk front and center, you’ve got three of Marvel’s best (relatively) new characters. Throw in Nova, the younger Cyclops from All-New X-Men, and Viv Vision, it’s an eclectic and fun team. Art by Humberto Ramos with scripting by Mark Waid? There’s just no way this book isn’t coming out of the gate any way but good.

The Marvel Universe is fractured. Heroes, who once stood together, now position themselves in opposition to one another. Idols of the Marvel Universe who once endured in the light are now shrouded within shades of gray, and the heroes of tomorrow are fed up! It’s time for a change. It’s time for a brighter tomorrow. Enter…the CHAMPIONS! They’re coming to you in Marvel’s CHAMPIONS #1 – a brand-new ongoing series launching this October as the flagship title of Marvel NOW!

Eisner Award winning writer Mark Waid and Eisner Award nominated artist Humberto Ramos join forces bring you a brand new super team for a new era. A teen team supreme that refuses to adhere to the antiquated ways of old. It’s time to be heroes again, and Ms. Marvel, Miles Morales, Nova, Viv Vision and the Totally Awesome Hulk are striking out on their own to make a new future. Not Avengers. Not Defenders. Champions!

“To their mind – the reputation of super heroes has taken a very public beating and they’re very intent in proving to the world that super heroes still have value and still have relevance,” says series writer Mark Waid, in an interview with Marvel.com.

It doesn’t take a Tony Stark or a Captain America to make a difference. All it takes is six young heroes and you can change the world – and they’re only the beginning! It all starts this October as Waid & Ramos bring you Marvel’s CHAMPIONS #1 – coming to comic shops and digital devices everywhere! 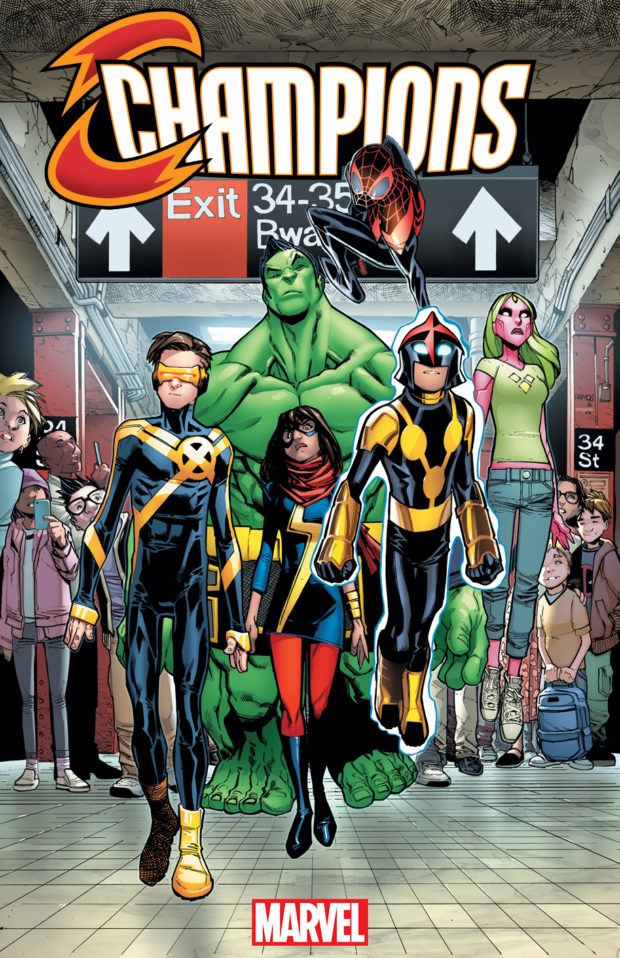