A couple of years ago, with the artist’s kind permission, we ran a version of this chart by Maurice Mitchell of The Geek Twins. And of course, things have changed since then, so it’s past time we ran the update. And with Deadpool destroying box office records, good lord, are people going to keep asking: who’s in the Marvel Cinematic Universe and who’s in Fox’s mutant stable?

Sony gave up on Ghost Rider, which Maurice had noted originally. I really would like to see the character show up in Civil War or something, just a flaming bike in the distance as a nod that “yeah, he’s in the main MCU!”

Namor’s rights are murky with Universal, and two years ago he was completely separate on the chart. But if Marvel really had a plan for him, it looks like Kevin Feige could find a way to make it work.

They had to add in characters like The Guardians of the Galaxy, and of course there are many more that we just aren’t thinking about right now because Marvel hasn’t convinced us we absolutely have to see them. Yet.

I am unsure about the Man-Thing issue, or if anyone really would want to do anything with him. The Lionsgate “movie” was terrible, and Marvel hasn’t really done a horror film since the MCU took shape. (Blade would count, but that was at New Line Cinema.) Still, Agents of SHIELD mentioned Ted Sallis, so maybe Lionsgate doesn’t have Man-Thing anymore. (Side note: one of the stars of that horrible Man-Thing movie was actually the new Patsy Walker, Rachael Taylor. Don’t tell her you know that; it won’t go well.) 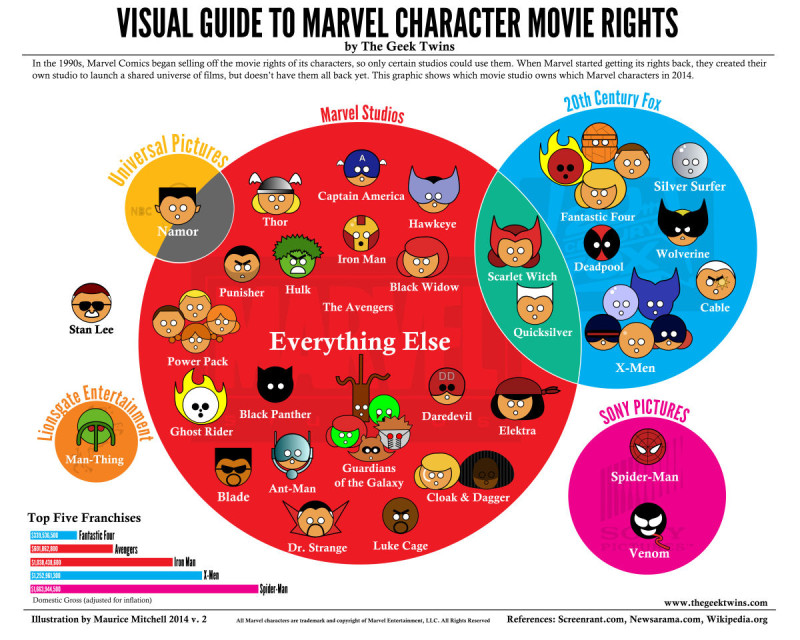