We may really be getting something different. When Jack Kirby created the Eternals, he revealed a secret history for Earth, with a mostly benevolent immortal race watching over us. Whether or not it was meant to tie into the larger Marvel Universe didn’t matter. Kirby continued his deep dive into the cosmic ineffable, and this teaser opens in that vein. Inspired by Chariots of the Gods, Kirby would be proud, I think, but not surprised. He always knew his work was going to take over the world.

With Chloe Zhao writing and directing Marvel’s Eternals, superheroics look to be beside the point — except for a punchline at the end of the teaser. They exist in the Marvel Cinematic Universe, but there’s a lot to explain about the line “Throughout the years we have never interfered, until now.” They let Thanos wipe out half the universe’s life and didn’t interfere. What pushed them in 2021? And how does the Black Knight (Kit Harington) fit in?

Are we ready for a philosophical film disguised as a superhero epic? We’ll find out on November 5, 2021 (in the US).

You can read the original Jack Kirby saga here.

Fanboy Planet is an affiliate of Amazon; any purchase made through links on this site may result in a bounty. 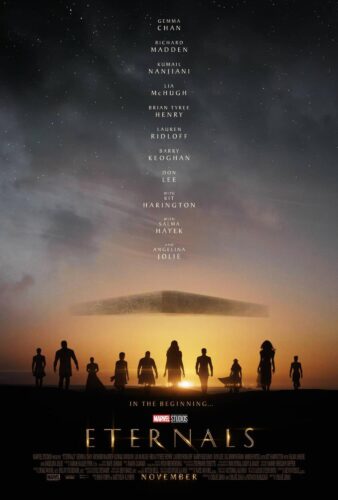