It has had false starts — a pilot for Fox, a pilot for Hulu — but at last, Joe Hill and Gabriel Rodriguez’ epic comic series Locke and Key is coming to television. Netflix released a teaser poster and an airdate — February 7, 2020.

Published by IDW, Locke & Key follows the children of the Locke family as they explore dark secrets in the ancestral home, Keyhouse. Evading demons and discovering abilities gifted by keys to various rooms in the house, the clan also works through personal trauma brought on by the murder of their father.

If it sounds like it shares a little DNA with The Haunting of Hill House, know that producer Meredith Averill worked on that as well. Lost producer Carlton Cuse serves as showrunner (he developed the previous pilot for Hulu, though it has been recast and reshot). 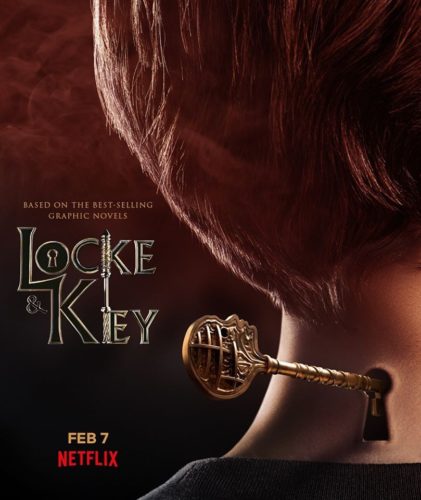 Once again, we cannot lament the loss of Marvel series for Netflix, as they’re happily picking up comics properties from other publishers — in addition to IDW’s Locke & Key, news arrived last week that Season 2 of Gerard Way and Gabriel Ba’s  The Umbrella Academy has finished shooting, though a release date hasn’t been announced. Netflix also owns Mark Millar’s Millarworld company, and are said to be developing his book The Magic Order to series.

No doubt there will be more to come…

Fanboy Planet has an affiliate relationship with Amazon. As such, any items purchased through Amazon links from this site do create revenue for us.