When Warner Bros first announced that J.K. Rowling would be writing original screenplays for a series of Fantastic Beasts and Where to Find Them films, it seemed a little risky. Yes, she’d written seven of the most popular books for young adults in the late 20th/early 21st centuries. But focusing on Newt Scamander and cataloguing magical creatures — it seemed like a good idea for a game (coming soon from Warner Bros. Interactive and Niantic) but not so much a new film trilogy serving as a prequel to the Harry Potter films.

As it turned out, the only problem was a wordy title. Rowling fans were hungry enough for more, and Warner Bros’ commitment to five films sight unseen has turned out to be pretty canny. And thus the Wizarding World of Harry Potter became J.K. Rowling’s Wizarding World (mostly about Harry Potter), at least for the purposes of future licensing. Because it is a world, and you can take or leave elements of it (including those titles), but it’s tremendously well thought out. I am still a little irritated that Rowling thinks that American Wizards wouldn’t come up with a better name for regular humans than “Nomaj,” but maybe she has a point.

My point here is that we have new images from the second Fantastic Beasts film, and we should probably drop that “Fantastic Beasts” thing and just go with the subtitles. In this case, The Crimes of Grindelwald. It’s controversial because of the casting of Johnny Depp as the magical Hitler before Voldemort, but the rest of the cast is oddly enchanting… particularly Ezra Miller returning (and delaying the production of Flashpoint).

At the end of the first film, the powerful Dark wizard Gellert Grindelwald (Johnny Depp) was captured by MACUSA (Magical Congress of the United States of America), with the help of Newt Scamander (Eddie Redmayne). But, making good on his threat, Grindelwald escaped custody and has set about gathering followers, most unsuspecting of his true agenda: to raise pure-blood wizards up to rule over all non-magical beings.

In an effort to thwart Grindelwald’s plans, Albus Dumbledore (Jude Law) enlists his former student Newt Scamander, who agrees to help, unaware of the dangers that lie ahead. Lines are drawn as love and loyalty are tested, even among the truest friends and family, in an increasingly divided wizarding world. 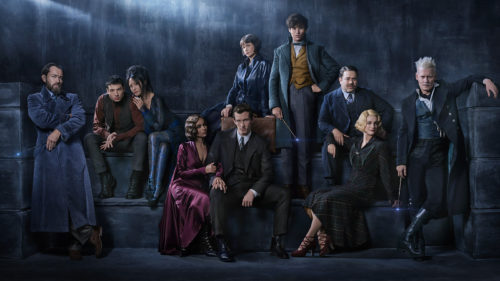 “Fantastic Beasts: The Crimes of Grindelwald” is directed by David Yates, from a screenplay by J.K. Rowling. The film is produced by David Heyman, J.K. Rowling, Steve Kloves and Lionel Wigram.

Slated for release on November 16, 2018, the film will be distributed worldwide in 2D and 3D in select theatres and IMAX by Warner Bros. Pictures, a Warner Bros. Entertainment Company.