While Ryan Coogler’s Black Panther continues blowing minds in the run-up to Avengers: Infinity War, Marvel Comics (remember, they have comics) knows when they have a good thing on their hands. Though the movie may be called Black Panther, it’s just as much about the people of Wakanda, and the small group of heroes that could give the Avengers a run for their money. Except right now, they’re going up against the X-Men. And oh, yeah, Spider-Man has something to do with it, too.

The Dora Milaje, the female warriors who are, let’s face it, pretty much as good at fighting as the Black Panther without the benefit of the heart-shaped herb, will team up with the merry mutants in Wakanda Forever. Since in the comics, there was a brief time when Storm was actually married to T’Challa, this crossover doesn’t come out of nowhere. But now it makes me think cinematically — after X-Men: Dark Phoenix hits theaters, and Disney’s buyout of Fox completes, wouldn’t it be something if the introduction of the X-Men to the Marvel Cinematic Universe starts with Black Panther 2 — just the appearance of Storm? Marvel could weave various X-Men throughout the next few movies and before you know it, we have a legitimized reboot of the franchise.

But let’s not get ahead of ourselves. Instead, let’s just enjoy Wakanda Forever. If you’re a science fiction fan, you need to pay attention to this. Nnedi Okorafor just got named as a finalist for a Hugo Award in 2018, for the novella Binti: Home. I’m in.

After their scene-stealing theatrical debut in Marvel Studios’ Black Panther, Wakanda’s fiercest warriors are traveling outside of their country to fight new threats and new troubles, in an all-new comic book story by award-winning science-fiction and fantasy author Nnedi Okorafor!

The WAKANDA FOREVER story starts in June with Okoye, Ayo and Aneka teaming up with everyone’s favorite webslinger, Spider-Man! In the second installment of WAKANDA FOREVER, out this July, the Wakanda warriors meet the X-Men – including the Black Panther’s one true love, Storm! But when Okoye, Ayo and Aneka come up against deadly former Dora Milaje member Nakia, their mission turns to protecting their king – no matter what the cost…

“This story is a big Marvel-style adventure with the Dora Milaje front and center,” said editor Wil Moss. “Nnedi may be relatively new to writing comics, but she already has the voices of all these characters down cold – from Okoye to Nightcrawler. Don’t miss this one, folks!”

Featuring art by superstar creator Ray-Anthony Height (Amazing Spider-Man), X-MEN: WAKANDA FOREVER #1 hits comic shops this July! And be sure to follow the Dora Milaje as their adventures in the Marvel Universe continue this August with the third installment of Nnedi Okorafor’s epic story! 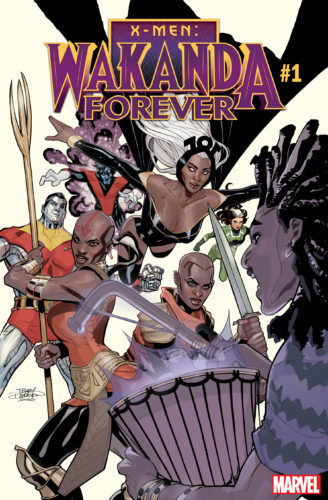