Does the DC Universe means as much to you as the DC Omniverse? In 5 months, it may not matter. Rumor has it today that after a 2-month event called “Future State,” DC will stop caring quite so much about continuity. In the wake of the “Death Metal” event, we may get the Omniverse, where  editorial will give creative teams looser rein to tell the best stories they can without worrying about how what happens in Gotham affects Coast City and vice versa. (Not that they care much now.) It’s another restart, but not as much a hard reset as New 52 and Rebirth were, and… I just don’t care. I just want good stories.

So do new readers. The audience being sold to best right now are the tweens and YA readers, and they’re not buying monthly comics. They’re buying specially tailored graphic novels in mainstream bookstores. Those graphic novels don’t follow continuity — all that matters is that the characters are recognizably who they say they are, and that they’re entertaining. They WORK. A few are self-contained series, like Ridley Pearson’s Super-Sons and the Study Hall of Justice, but that’s a far cry from having to buy every title released.

That’s one reason that WarnerMedia has been awkwardly dealing with comic book shops throughout the pandemic, changing ordering policies and acting like they don’t care. Because the people at the top — they don’t care about monthly comics. They care that you like Batman, Superman, Wonder Woman and the rest (even Swamp Thing), but more so the trademarks stay alive — they make more money licensing Batman clothing than they do selling Batman comics, except maybe in trade paperbacks. Very few classic stories have been read by more people than saw the movie adaptations — maybe Watchmen, maybe The Dark Knight Returns, and that’s why despite it being completely unnecessary, we have Rorschach in stores after Geoff Johns and Gary Frank’s Doomsday Clock “continued” the legacy of Alan Moore and Dave Gibbons. (And Damon Lindelof did a better continuation on HBO, which Tom King’s Rorschach seems to be responding to instead of Doomsday Clock.)

In truth, every time DC has done a reset of continuity, old continuity keeps creeping in as creators restore what they liked from the past. Once upon a time, Barry Allen and Hal Jordan were dead, one having died heroically and one redeemed after turning villain. But when Johns became a comics superstar, and wanted “his” Green Lantern back. That did lead to an epic run, but pushed another generation’s Green Lantern (John Stewart) off to the side. Johns also became Chief Creative Officer, so he was hard to say no to, though supposedly Dan DiDio often tried.

Despite having a terrific run writing Barry’s nephew Wally West as the Flash, he wanted Barry back, and so Wally got pushed to the side, then out of continuity, then when another reboot happened, back in because it turned out that Dr. Manhattan had removed him but he fought his way back in, and not as much of that is Johns’ fault as it seems. It was reactionary, going from an “edgier” tone (New 52) to maybe not so concerned (anybody remember Dan DiDio’s “DCYou” movement?) to a relaunch of optimism (“Rebirth”). All of it was a bid for sales, and comics are a business, so this isn’t to rip DC a new one for it all.

Comics used to have a loose continuity. After the first time Batman met the Joker in 1940, writers and artists couldn’t very well pretend that they’d never met in subsequent stories. But other than “Again?,” what the Clown Prince of Crime had done before didn’t matter so much as the story kids were reading in this issue. The very existence of Donna Troy, Wonder Girl/Troia, comes from not caring about continuity. When Bob Haney and Bruno Premiani created Teen Titans, they didn’t realize that the Wonder Girl they’d seen on the covers of Wonder Woman was just Wonder Woman as a teen, written by Robert Kanigher. So then the continuity twisting had to start to figure out how she wasn’t Wonder Woman.

Not that Haney cared much. One of the best runs in comics you can read is Brave and the Bold, when Batman teamed up with heroes and concepts all across the DC Universe. All that mattered was the characters, not their continuity. That book had its own internal logic, in which Plastic Man could be an almost consistently serious character who subbed in for Batman when he had to be out of the country, or that Batman — not Bruce Wayne — could have a best friend who was a normal member of society and didn’t know who was under the cowl. We didn’t question it the first time around; we just devoured it.

It’s also not the first time that DC tried to make lack of continuity into continuity. After the success of the future-set Kingdom Come, Mark Waid followed up with The Kingdom crossover event, which revealed the existence of Hypertime — that elements of stories wove in and out of continuity depending on the need to tell the story. It was a way of including it all without getting a headache over it. Though Grant Morrison was determined to include it all and make it work with Batman.

But really, how can the loner hero of Gotham City also be an expert in science and aliens while also having stories in which he doesn’t believe in aliens — when two JLA teammates (minimum) are themselves proven aliens? THAT hurts my head. (I’m also bothered that the current Mr. Terrific, Michael Holt, has been established as an atheist when his first origin tale by John Ostrander and Tom Mandrake had him being encouraged to become Mr. Terrific by the Spectre — a ghost who is the incarnation of the literal Wrath of God.) At least Ambush Bug knows what a joke it all is. 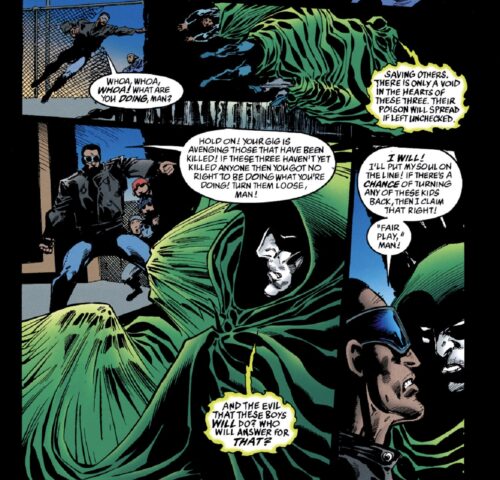 Back to reading old collections — have you ever picked up a compelling series of trades only to be blindsided by a title’s participation in a crossover that then completely ruined the story for you? See: Marvel’s Journey into Mystery (derailed by “Fear Itself”) and Christopher Priest’s Black Panther. Both are great runs that come to a screeching halt because of crossovers. Journey Into Mystery never recovered.

So bring on the Omniverse! Marvel should do it, too! Just give us books that we want to read, not that we feel obligated to read.

Fanboy Planet is an Amazon affiliate. Any purchase made through links on this site may generate revenue for us. BUT… right now more than ever, support your local comics shop!