I appreciate a horror movie that makes its promises up front, and then (perfect for Christmas horror) delivers on time. Written and executive produced by dark nerd king Dana Gould (that’s a compliment), Toys of Terror fits in a strange box containing family fun, camp, and light gore. Plus, because it’s a WarnerMedia production, somehow it works in two Hanna-Barbera characters.

But it’s also everything a low to medium budget horror film should be. The cast of characters is small, with everyone getting enough screen time to register as important. Even when some of the plot points are cheesy and/or a little hand-wavy, every actor takes their role seriously. The location is believably remote, and Gould quickly solves the “but what about smart phones?” question.

Let’s call that acting out — because it’s uniformly solid. If you watch a lot of horror films, you know that the acting can either be generously called mediocre, or they’re just sleep-walking through it. Even when the kids in Toys of Terror are sleep-walking, they’re committed. I don’t see this enough even in mid-level horror films. Though I didn’t recognize any of the actors, I’ll be keeping an eye out in the future.

The production also makes the choice to do practical effects as much as possible. Those toys of terror? Director Nicholas Verso brought in a team of stop-motion animators. Whether or not it was a budget issue, it gives Toys of Terror a classic look — and Verso goes all in, providing a scene that’s right out of a demented Rankin-Bass special, though it’s fairer to say the look is more George Pal’s Puppetoons.

Aesthetically, the toys themselves are all over the place. There’s a de facto leader that looks like he escaped from the Island of Misfit Toys, but the real mastermind seems to be “Uncle Monkey,” which father David Cashman (Dayo Ade) says was the star of his favorite show as a kid, despite the monkey giving off a real 1920s evil toy vibe. There’s a 16-bit video game that troubled teen daughter Alicia (Verity Marks) plays, unaware that it’s warning her about real toy dangers happening elsewhere in the house. And, somehow, Speed Buggy appears, with a bit of a death wish. Tying this into an earlier Warner Bros Blue Ribbon DTV movie, a stuffed Snorky from The Banana Splits wreaks some havoc.

Just saying that I told the Warner publicist I thought this movie was right in my wheelhouse, and I was not disappointed. It’s not perfect, but Toys of Terror is fun, and we can use all of that we can get. Right now it’s available on Movies Anywhere and other digital platforms, with a blu-ray release coming in January. Both come with extra videos — including one that details the stop-motion process.

Fanboy Planet is an Amazon affiliate. Any purchase made through Amazon links on this site may generate revenue. 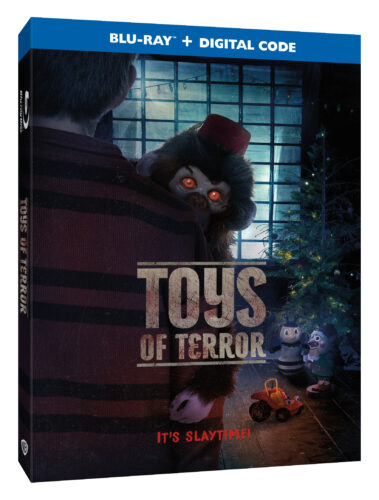