When a ship gets too heavy, its crew jettisons all the unnecessaries in order to lighten things and speed them up. Unfortunately for Pirates of the Caribbean: At World’s End, by this time no two people can agree on what the unnecessaries are. Only one thing’s for sure: Director Gore Verbinski is perfectly content to just let things drift along. The Black Pearl will reach its destination eventually.

Then in the effort to make that one-off a bona fide trilogy, screenwriters Ted Elliott & Terry Rossio brought everything back and soaked it with meaning. Rather than slow down Dead Man’s Chest, however, the narrative careened wildly along, allowing little time for each new revelation to register. You just had to hang on tight and hope you didn’t get swept overboard. 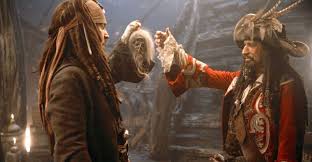 They were also building the script around some spectacular sequences that Verbinski was determined to shoot. It doesn’t seem that he was so inspired here. Instead, the script does its best to introduce new adventure while wading through the muck the last movie left lying around. By introducing the dread pirate Sao Feng (Chow Yun-Fat), the film offers hope. He’s sleazy, steamy and more than a match for Geoffrey Rush’s Barbossa. 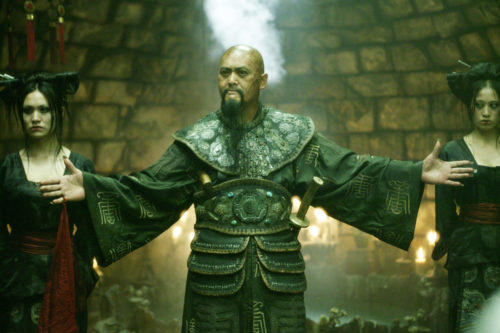 The two stare each other down while the Black Pearl’s crew try to sneak through, and Verbinski turns this into a tremendous action-filled beginning, especially if you believe that monkeys are like cheese. They make everything better.

Soon enough, though, things have to slow down for a contest between Orlando Bloom and Keira Knightley to see who can look more soulful, and who can make us care less. The script meanders as everyone tries to figure out if you can have pirate cake and eat it, too. Elliott and Rossio accidentally gave Bloom’s Will Turner a goal that runs at cross-purposes to Elizabeth’s, and the story keeps trying to shake it off, hoping no one will notice.

As soon as either character’s arc starts to pick up speed, they have to stop and gaze longingly, as if to remind us that they’re supposed to be great cinematic lovers. Forget that – one of the things George Lucas did right was throw out the noble but ultimately boring Luke Skywalker and position the roguish Han Solo for Princess Leia. The same thing should happen here – we want Jack Sparrow to get the girl, if he wants her.

But first he must be rescued in order to help Will and Elizabeth fight Lord Cutler Beckett (Tom Hollander) and his East India Trading Company. Except that even that can’t be as it seems. Not only does Barbossa have some other plot suddenly going on with the enigmatic Tia Dalma (Naomie Harris), which entwines with Davy Jones (Bill Nighy) who has entwined with both Will and Jack who has some connection to Beckett …oh, crap, it does get a bit confusing.

Yet that isn’t the problem. At World’s End has a dense plot, yes, but if it were a novel, it would be easy to praise. It’s just that curious lack of energy that Verbinski brings. At one point, he even stops things dead for the visit to “Davy Jones’ Locker.” Things halt so screechingly, for a moment it seems like they tacked a reel on from another film.

It would be easy to say that part of the problem comes from a half-hearted attempt at a theme of the old world ending. Certainly, Sparrow and Barbossa do some verbal sparring about the passing of an age. They should be headed towards a rousing last stand against civilization, but again a twist too many makes it hard to keep track of that idea.

The film also has some mumbo jumbo about freedom versus order, and obviously, in a movie about pirates, we’re rooting against the traditional heroes. But At World’s End has an opening making unpleasant comparisons to our current state of affairs in the United States – and that opening ends with the hanging of a child. It’s really hard to warm up after that.

Beckett also spends time muttering about things being “…just good business.” So maybe we are to take away that standard capitalism is bad, even as we buy all our ancillary Pirates merchandise. We’ll be suckered into a fourth film, for sure, because that old world really can’t fade away as long as we’ll pay to see it.

So we’re left with sound and fury. When the action focuses on favorite elements, we can be pleased. The problem for a ship this big is simply that we don’t all like the same things. If Disney had been more honest and been willing to just admit to a fourth film earlier on, they could have saved some for later.

If the fourth trims some fat, or takes the bloom off a bit, we could get back to what made this all work for us in the first place. Hello…pirates…