Starting next week, children across America will be saying “bugger,” imitating Jack Sparrow’s most uttered line. This may not be the most socially responsible development, but it will only speak to the other Fanboy Planet prediction of the month: Pirates of the Caribbean: Dead Man’s Chest will completely rule the Summer. And well it should.

This movie provides all the excitement of a thrill ride while still moving its characters forward. Amidst giddy battles, real character development, some of it even subtle, keeps cropping up. Director Gore Verbinski balances pace and plot so well, even the cliffhanger ending (setting up next Summer’s At World’s End) feels like, “yeah, we can stop here for a little while because we need to take a breath or two. Thanks.” Everybody gets their due, with the script finding a place for just about everybody from the first film. At the same time, Ted Elliott and Terry Rossio expand the mythos in some clever and touching ways.

Though we see Jack Sparrow (Johnny Depp) firmly in command of the Black Pearl, except for that pesky undead monkey, all is not well at the beginning of Dead Man’s Chest. On the eve of their wedding, the franchise’s young lovers Will Turner (Orlando Bloom) and Elizabeth Swann (Keira Knightley) get taken into custody. Their crime? Aiding and abetting the escape of a pirate, punishable by death.

Of course Jack has problems of his own. In order to captain the Black Pearl in the first place, he sold his soul to Davey Jones (Bill Nighy). The patron demon of the sea doesn’t care that Jack’s thirteen years of captaining were interrupted by a mutiny. To add insult to injury, Davey Jones’ messenger is a previously unseen but crucial character – Bootstraps Bill Turner (Stellan Skarsgard).

It’s a great addition, allowing for Will to have a decent arc as he comes to grips with his father’s ghost – literally. While the callow youth wrestles his father issues, Jack and Elizabeth spar over morality, and suddenly this frivolous film franchise actually has something like depth to it. 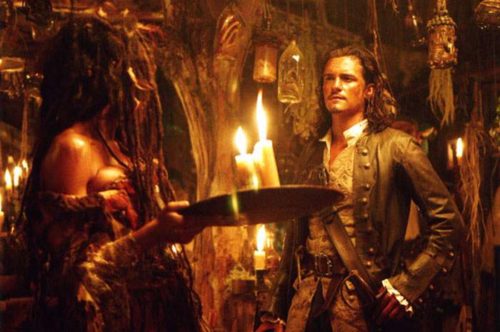 Impressively, it doesn’t get lost in the spectacle, but Verbinski delivers plenty of that, too. The stuntwork in this movie is amazing, but it never seems arbitrary. A giddy three-person swordfight just keeps upping the ante, involving a runaway water wheel and the requisite lush scenery. Yet it all follows from the plot.

Dead Man’s Chest also has some tremendously impressive production design. We’ve seen the grime of Tortuga, and the efforts at duplicating the theme park ride before. But with this, we get a fierce cannibal tribe with some subtly disgusting set pieces, and then a Caribbean bayou so dank and moist it’s like being licked.

The real achievement, though, is with Davey Jones and his crew of the Flying Dutchman. What sets this movie apart from everything else we’ve gotten so far this Summer is its willingness to really take us someplace new. Cursed to serve the heartless (literally) Jones, the crew and the ship have taken on the life of the sea, slowly merging with the ocean. Bill Turner has it comparatively light; only a starfish and a few barnacles seem to be growing on him.

Jones himself has magnificently merged with lobsters and squid, which allows for a few grotesque visual gags. At one point, Verbinski uses him to pay homage to Disney’s 20,000 Leagues Under the Sea. Yet underneath the make-up and the CG lies a talented actor commanding the screen, holding his own against Depp.

Both Bloom and Knightley, too, have greater strength in this film, though it’s really Elizabeth Swann that plays foil to Jack Sparrow. She teases and taunts the pirate captain in ways the first film only hinted, and both characters don’t exactly like what it reveals about them. With the father-son dynamic of the Turners, Bloom gets a chance to be a little more than earnest, and Skarsgard brings a note of sadness that makes a nice counterpoint to all the action.

Perhaps trying to prove his craftsmanship, Verbinski does linger a bit over certain shots. While the extra arty shots seem showy, they also allow for a little bit of breathing before the audience tumbles over the next set piece. A subplot involving the East India Trading Company slows things down, too, and though it sets up another villain in Lord Cutler Beckett (Tom Hollander) , Dead Man’s Chest really flies its flag highest when dealing with the supernatural and the swashbuckling.

Even with the cliffhanger, the story moves so swiftly and surely that the ending really seems a logical next step. No, it doesn’t involve Keith Richards; he’s waiting for the third film. And after seeing Dead Man’s Chest, we’ll be waiting, too.