Might as well strike while the cotton candy is hot. What do you get when you cross the terror of IT with the stupidity of Sharknado? Sight unseen, I’ll call it a brilliant marketing move, and a movie that I’ll watch because sometimes… I just have to know. From this trailer, it also looks like there’s a hint of zombie movie — if it turns out that one bite from a clown will turn YOU into one, I will be filled with envy that I didn’t think of that first.

Will it be as great as Killer Klowns from Outer Space? Maybe not, because what could be? But the idea of twisted clowns traveling in twisters… I can’t help myself.

My apologies to those with a fear of clowns. All we know about the release is… coming this summer, to some theatrical release and definite VOD. It’s described as follows:

Cursed demonic circus clowns set out on a vengeful massacre using tornadoes. A stripper, Elvis impersonator, truck driver, teen runaway, and a dude get caught in the supernatural battle between femme fatal and the boss clown from hell. 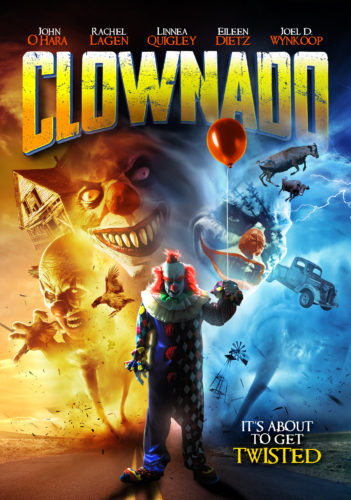