If you’re going to get the full transmedia rights back, you might as well flip the table and set the whole thing back up again. So it is with Marvel and the X-Men — though we’ve had many times in the past where the characters start over. We’re not really talking about continuity starting over, but ending one status quo and giving readers a new jumping on point, and people new to the franchise something to hold on to that says “this is how it is in the 2020s…”

For those of us who have been with the X-Men since forever, or at least the 80s, it can be jarring. But if anybody can give it new life, new thought, and a new direction that doesn’t make us miss the old one, it’s Jonathan Hickman. Architect of Marvel’s Infinite event and the man who gave Victor Von Doom everything he ever wanted in Secret Wars, Hickman has a way of deconstructing and reconstructing properties that make for good fiction. I’ll be honest, though — sometimes it also makes your head hurt, in a good way.

This summer, he takes over X-Men, and once again Marvel brings all the previous titles to a close in order to relaunch and redefine the concept in July under Hickman’s purview. And as we all speculate when the merry mutants might join the Marvel Cinematic Universe, it could be that Hickman has the opportunity to lay the groundwork and be part of what will be the equivalent of Endgame a decade or so from now.

Beginning this July through September, all the current X-titles will come to an end as Hickman reshapes the mutant world forever starting with HOUSE OF X and POWERS OF X. Speaking with Comicbook.com Hickman shared his long-term plans for the X-Men with fans and retailers everywhere.

“We needed to sell the idea that this is what we’re going to be doing for the next few years,” said Hickman. “We wanted to be clear to the fans, to the stores, and just as importantly, to the creators who are going to be staffing these books in the future. We wanted the message to be very clear: This is a whole new era for the X-Men. This is what we’re doing now.”

Fans of the current series will see that the X-universe has been dovetailing to this new era, which will build from every major X-Men milestone since 1963 up through all of today’s fan-favorite X-Men series.

Following HOUSE OF X and POWERS OF X, a new X-universe will emerge, with Hickman leading the first phase with an ongoing flagship X-Men book alongside multiple new series and creative teams. “Some [books] will be traditional fare, some carry through on ideas presented in HOX and POX. Some books are completely new concepts,” said Hickman. More details about these books will be revealed at San Diego Comic Con later this July. 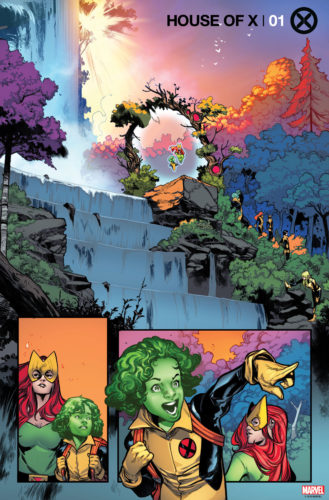 With the interview, Comicbook.com also debuted the next set of covers for HOUSE OF X and POWERS OF X issues #2 and #3, along with never-before-seen pages from each issue #1!

“HOUSE OF X, is a story about a pivotal month in the history of the X-Men where everything changes for mutants on Earth. And the other, POWERS OF X, is a story about the history of mutants in the Marvel Universe,” explained Hickman. Each series will be released on an alternate weekly schedule, starting with HOUSE OF X, followed by POWERS OF X. Fans will be able to follow along each week this summer and witness history unfold. 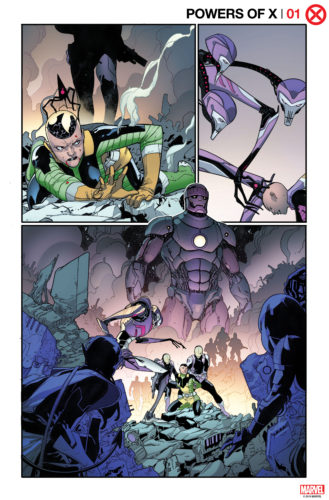 POWERS OF X #2 and #3 (of 6)
Written by JONATHAN HICKMAN
Art by R.B. SILVA
Colors by MARTE GRACIA
Cover by R.B. SILVA