The first time I encountered Michael Moorcock’s Elric of Melniboné, it was in the second “official” Marvel Graphic Novel, an adaptation of “The Dreaming City” by Roy Thomas and P. Craig Russell. (I’d missed the issues of Conan the Barbarian that Thomas had brought Elric into.) I was stunned. I was hooked. I was vaguely excited that I later recognized the parallels between that story and Moorcock’s The Final Programme. But Elric has my heart, though not my blood and soul for Lord Arioch.

Moorcock’s Eternal Champion cycle has been adapted to comics before, and Titan Comics has reprinted most if not all of it. But it’s cool to see it redone for a new audience — and this time, adapted in chronological order rather than picking and choosing creators’ favorite stories. After having read all of the original novels, I can say Elric is still the best character of the Eternal Champions, and no matter what form (and where it actually fits in the chronology), The Dreaming City makes a great introduction.

This time around the creative team consists of writers Julien Blondel and Jean-Luc Cano along with artists Julien Telo and Robin Recht. The tale of Elric wandering the land with the black blade Stormbringer, cursed to serve Arioch, the god of chaos, lands in comics shops on August 8. Check out some pages below, including a cover by Mike Mignola. 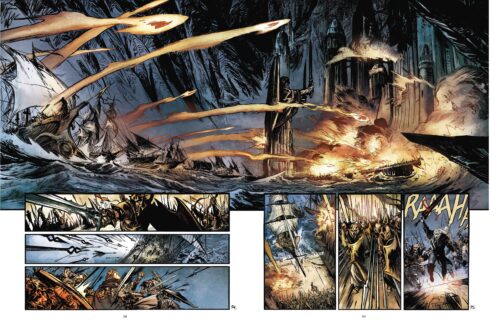 Fanboy Planet is affiliated with Amazon. Purchases made through links on this site may generate revenue.