Spartacus fans rejoice! Hurray! The Gladiator flick is back this week with director Zack Snyder’s (Dawn of the Dead) film adaptation of the Frank Miller graphic novel 300. A bloody, gory, epic of digital cinematics, 300 is a visually stunning movie. Unfortunately, when doing a period, sword and shield, war movie, you run the risk of treading familiar ground. 300 is a treat to the eyes for sure, but after almost two hours of movie, you may begin to wonder, have I seen this before?

300 tells the tale of the Battle of Thermopylae, where 300 Spartan warriors went up against a massive Persian offensive. The Spartan King, Leonidas (a very pumped up Gerard Butler) stands defiant to the threat of slavery and submission, and leads his band of warriors to a small confined area of mountain called the Hot Gates to make his stand.

There, Leonidas will face the elements, the immortals, and the imposing leader of the Persian Army, Xerxes. 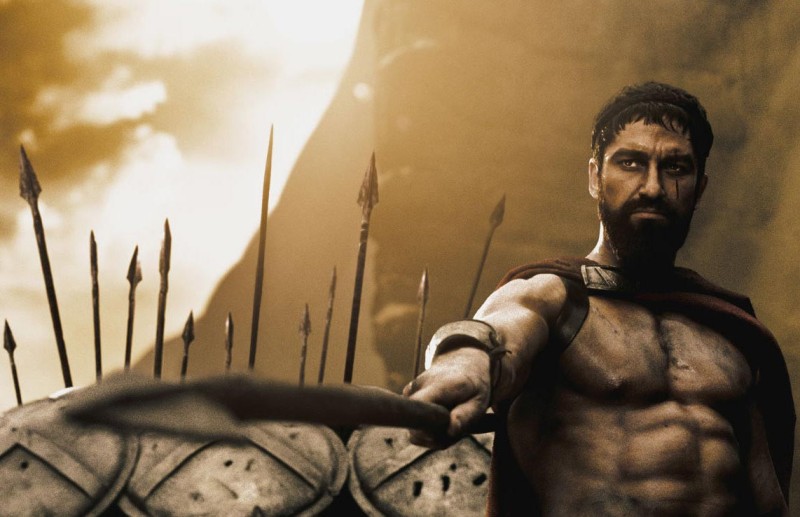 Like the sword and tunic epics that have come before it, (Gladiator, Troy, Braveheart, etc.), 300 is a standard story. At times the movie even feels pretty one dimensional, given that the only set up is that these 300 soldiers must face down millions of aggressors. The Spartans fight for freedom, for brotherhood, and for Sparta, and after awhile, you begin to feel like the story of 300 could have been the same one plucked from Braveheart, or Lord of the Rings.

Since the story is so simple, there’s not much room for character development, and Snyder falls into the war movie clichés to compensate. There’s the charismatic and wise, yet fair leader, his trusty sidekick and captain, the young soldiers who have a playful rivalry, and then of course, the brainy one who will eventually narrate the story.

Where 300 shines is its visuals. Shot entirely with blue screen with the backgrounds later added digitally, the movie is lush with color and style. The action sequences are detailed and precise. The frames of the movie almost exactly mimic the panels from Miller’s comic. Sometimes however, the movie’s use of slow motion can be a distraction. A good portion of all the action is shown in slow mo. This can be great to watch but at certain times it gives the movie a dreamlike feel. Occasionally, that took me out of the film. It feels as if the movie can’t decide if it wants to be a poetic masterpiece or just a comic book movie. 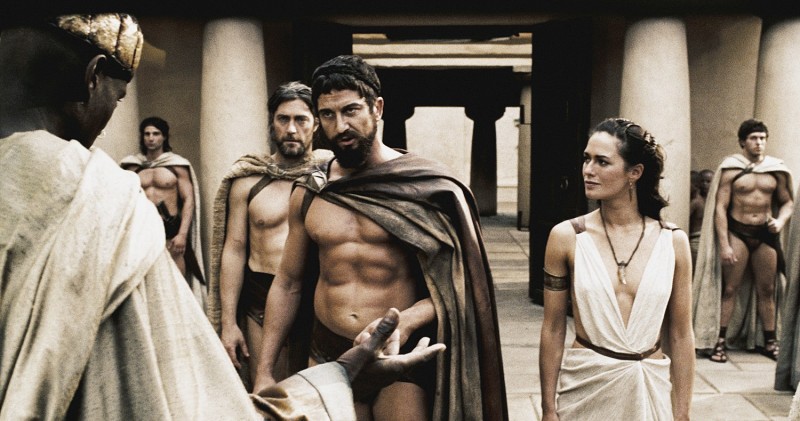 There’s also an added subplot that is only alluded to in the comic, where Leonidas’s queen, (Lena Heady) works the political front and tries to aid her king with more troops. It’s apparent that this aspect of the movie was not given the same care and microscopic attention that the other iconic scenes were and this is where the movie falters. It’s a less than compelling side story and it plays like a bad outtake from HBO’s Rome. And since a lot of it doesn’t require the heavy CG like the rest of the film, it really feels foreign and more of a hinder than a help.

The acting in 300 is fine. Gerard Butler makes a great leading man, but a lot of times, I felt like he was channeling Mel Gibson’s William Wallace. Most of Butler’s delivery is akin to Regis Philbin in the sense that his lines are mildly spoken phrases punctuated with yelling the final words. (This is… SPARTA! or Tonight we dine… IN HELL! or Goodbye my wife, I’ll MISS YOU).

The supporting cast is fine as well, yet there aren’t many standouts, and the soldiers are pretty forgettable. The Queen is good, and it’s nice to see another strong female character, but overall this movie is Butler’s and Butler’s alone. Even the androgynous Xerxes (Roderigo Santos) is weak, even though he looks the part of the comic; his acting betrays the strength required to lead an army of millions. 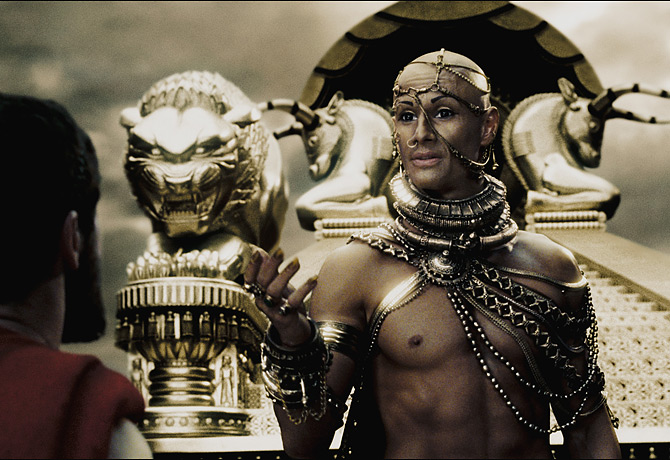 The best part of the movie, for me, was the explanation of the Spartan culture and warfare. The detailed account of how their Phalanx worked, how they train their young, how they act as one and that their number is their strength. This gave the movie some grounding and actually made the daunting task of the war they were about to wage plausible.

Overall, 300 is a strong movie, with amazing visuals and style. If you’re looking for more than that, you may have a problem with it. There’s no Russell Crowe to give us anguish and despair, there’s no Mel Gibson to lend inspiration, heck, there’s no Kirk Douglas to ad an “I am Spartacus.”

What there is though, is a pretty faithful adaptation of one of Frank Miller’s great stories, in the hands of a very capable director. That and a whole lot of half naked men killing each other. Like I said earlier… Hurray!