There are those of you out there who will ding me for not having seen George Romero’s original Dawn of the Dead, and then trying to review this remake. Perhaps once the willies have worn off from seeing it, I’ll be able to pick it up on Netflix. But until then I’ll just have to take the current incarnation on its own merits – which are considerable.

From what I understand, Dawn of the Dead follows the basic plot of its predecessor. The dead rise from the grave, kill people, and make them zombies. The population of the world is very quickly overcome, and civilization collapses. Our protagonists are a motley band holed up in a shopping mall, trying not to get eaten or go crazy.

Our heroine, Ana, is a nurse who at the beginning of the movie heads home from work for a romantic evening with her husband, and misses all the signs of the coming apocalypse. The short intro does enough to set up her character, and set a tone of blissful suburbia: clean, ordered, and sterile. Ana wakes to find a neighbor girl, zombified, in her hallway, and hungry. The little girl kills her husband, who then turns on Ana. Fleeing, she finds herself in pajamas on her driveway, looking out upon the end of the world. Cars haphazardly weave down the streets; agile zombies chase and devour panicking citizens, and those who are still human shoot at everything that moves.

Eventually Ana joins forces with several other survivors and takes refuge in a shopping mall. After some distrust and confrontation with the surviving mall security guards, and a further swelling of their ranks from a people filled truck, life in the mall settles into a sort of routine. Romances, friendships and alliances develop among the refugees, and they become an unlikely community. Soon waiting around to get eaten isn’t enough, and they formulate a plan to escape. 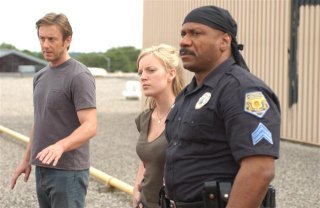 We never learn exactly why the dead have risen. There is the possibility that it is a virus, but really all we know is what the characters know. The dead are rising, shoot the head to kill them, and don’t get bitten. Why is no longer an important question and our characters have no time for it. All that matters is what’s happening now, and how to live through it.

The entire cast is well chosen. Ving Rhames as Kenneth, and Jake Weber as Michael, provide a grounding force for cast that tends towards shrillness in their hysteria. Sarah Polley’s Ana has a subtle complexity rarely seen in horror movie heroines, and though I kept expecting Michael Kelly, as security guard control freak CJ, to break into panicked screams of “Game over, Man! Game over!” he managed to turn the “you can’t wait till he dies horribly guy” into someone interesting to watch.

The action really moves, too. The intro is brief, and they get right to the grue. Blood, guts and unidentifiable zombie fluids fly about with abandon, and there was many a moment when my hands leapt over my face as I cringed at a particularly graphic bit. However, director Zack “One Entry in IMDB” Snyder had the good sense to refuse to wallow in the gore and move the story. Thankfully he also resisted following the path of so many action directors today by structuring his movie like a movie, rather than a videogame. I tell you folks, I’m sick to death of watching a flick and saying to myself, “Oh hey, the hero just killed the level two boss! Whoopee!” Hopefully Mr. Snyder will produce a few more plot and character driven horror movies, and revive what’s become a boring and predictable genre. 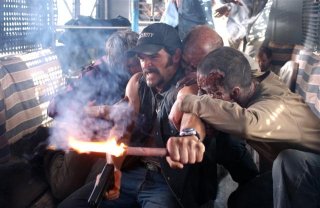 What Dawn of the Dead does is bring back the notion that the horror of a horror movie comes not from the gross-out, but from the situation the characters find themselves in. One of the scariest moments for me came right at the beginning, when Ana fled her home to find the world had come to an end right at her doorstep. Her street was a model of suburbia, and I’m sure many in the audience were mentally pasting their neighborhood and neighbors over the chaos before her. This move made a zombie uprising seem real, and that made it very, very scary. What I found most fascinating about Dawn of the Dead was the bewildered, desperate hope that drove the characters to go on.

Trapped in the mall, an icon of our consumerist culture, a group of modern people find themselves reduced to fighting for the basic needs that drove humanity to develop culture in the first place: food, shelter, and survival. Surrounded by Gucci shoes and Prada purses, (okay, it wasn’t that nice of a mall, but you get the idea) we see people struggling to live another day, and maintain their humanity, in a world that no longer makes any sense. It’s good stuff. Go see it with someone whose arm you can clutch.