Something about Trevor Slattery keeps him from understanding the moral implications of his acts. Or even the consequences of his actions. Or anything about the world around him.

Having posed as the mythical warlord called The Mandarin, Trevor (Sir Ben Kingsley) now sits in Seagate Prison, treated better than by most regional theaters. Blissfully protected by a segment of the prison population that loves it when he “does the voice” (that we heard in Iron Man 3), Trevor even has a butler, of sorts. The man needs someone to get his chocky milk, after all.

In this Marvel One-Shot included on the home video release of Thor: The Dark World, we visit Trevor on the last day of a series of interviews for a documentary. Ostensibly created by AIM, The Mandarin hoax certainly must have huge repercussions in the Marvel Cinematic Universe, and so the figurehead must be unraveled. 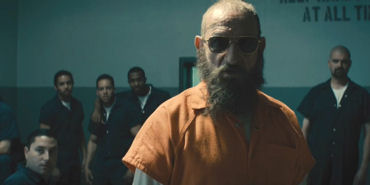 Written and directed by Iron Man 3 screenwriter Drew Pearce, All Hail The King feels like an early 70’s prison exploitation movie, though the flashbacks cover the ’60s and the ’80s. The perpetually in-denial Trevor deftly avoids a prison beatdown, just as his whole career he deftly avoided success.

Pearce gives us a glimpse of Caged Heat, the CBS pilot that should have launched Trevor’s career (actually, no it shouldn’t have), going so far as to actually have Mike Post compose a theme song. And kudos to the make-up design — Kingsley looks legitimately 30 years younger.

To say much more would be delving too deep into spoiler territory, especially for such a short but crucial chapter in the MCU. Suffice to say that if you’ve felt there were plotholes, or dangling threads, in the Iron Man trilogy, this starts sewing them up and promises more.

As these One-Shots have progressed, they’ve gotten more and more assured. The original ones starring Agent Coulson felt like just fun little vignettes. But Agent Carter on the Iron Man 3 disc definitely has ramifications, though it felt a little claustrophobic in style. 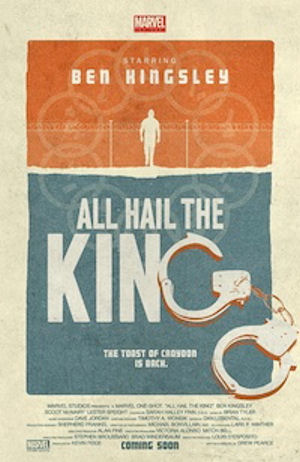 Not only does All Hail The King up the stakes, it also feels like it could easily be part of a larger big-budget film. It’s hard to say which one, though — where will it pay off? Will we have to wait years? As others have noted, Seagate Prison is where Luke Cage received his powers, and Marvel is ramping up production on the Luke Cage series for Netflix (no word on Mike Post scoring), but this feels… bigger than that.

For now, it’s just further proof that in the Marvel Universe, nothing gets thrown away. Everything is connected. And, like The Dude, somehow, Trevor abides.