Ever since New York, everything’s different. The cool exec with the heart of steel opened it up. He knows who he cares for. And then he flew into a wormhole and found himself willing to die for the Earth.

That’s not the same man we met five years ago in Iron Man. That guy never met any problem he couldn’t think his way out of. After facing the Chitauri, however, Stark discovered that there is something bigger than his ego, and possibly failing the people he cares about now terrifies him, even if he’s too cool to admit it.

And as played by Robert Downey, Jr., Tony Stark does remain just too cool. As directed and written by Shane Black, so too does Iron Man 3. Or at least, regains its cool after a bloated Iron Man 2. Everything that movie should have done right, Black accomplishes here.

From the get go, the film promises to be something a little different than all the other Marvel films. Tony narrates in a weary voice-over, accepting that his own bad behavior prior to Iron Man created his current mess. As with the second movie’s Whiplash, Stark sins of the past have come to haunt him, but this time around it’s manageable, believable, and has a direct bearing on where his story is going.

Two scientists — possibly three in the version that China gets — encounter Tony on the eve of Y2K. Aldrich Killian (Guy Pearce) is a nerdy disabled fanboy of a scientist whom Tony dismisses outright. To be fair, it’s so he can spend the night with the biogeneticist Maya Hansen (Rebecca Hall), but in the end he forgets both of them.

Of course, neither ever forgot him. 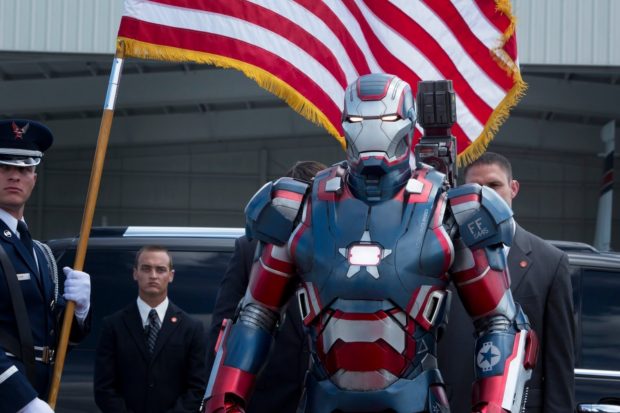 In the years since, Tony has forged armor, met gods and monsters, and truly become a different man. In the second film, he argued with the U.S. government over the use of his technology, and in a way his struggle to remain central to foreign policy. Now he’s eased up, and his friend Rhodey (Don Cheadle) has evolved from War Machine to Iron Patriot, and there’s a whole world of conflict out there that has nothing to do with Tony Stark.

Thus rises the Mandarin (Ben Kingsley), a terrorist warlord who assaults television screens with all-too familiar imagery and iconography. Not exactly a cookie cutter villain, the Mandarin encompasses everything our nation seems to be afraid of in the real world. Not much an Iron Man can do against that. Except when an accident of fate and Happy Hogan (Jon Favreau) being overzealous at his job collide, and the Mandarin makes it personal for Tony.

It sounds complicated. It is. But Black weaves it well, slowly spinning it all together so that every thread stays visible but meshes with all the others. In the process, he also takes Tony Stark down, making him rediscover the things that make him a hero. Circumstance forced him into it the first time around, but now it has to be a conscious choice.

That choice seems to be a combination of James Bond and Q, and Black has structured a lot of this film like the best of the Bonds. The Iron Man armor is just that; the real hero is the man inside, and he’s quite resourceful even without the metal shell.

But the metal shell does help, and the plot does not just advance the modernity of the suit. Black’s script plays with Tony’s uncontrollable tinkering, providng a glance into all the many possibilities of the Iron Man armor. Squee, fanboy, to see the Hulkbuster armor, but if you don’t know what that is… you can still see this movie and enjoy it. It’s one of many designs that the film utilizes well, and finally justifies a huge line of action figures with all these variations.

The usage of so many armors echoes a sequence from the second film, but again — this time it’s done right, a cacaphonous and breathtaking set piece that careens from wild stunts to special effects spectacular and back again. 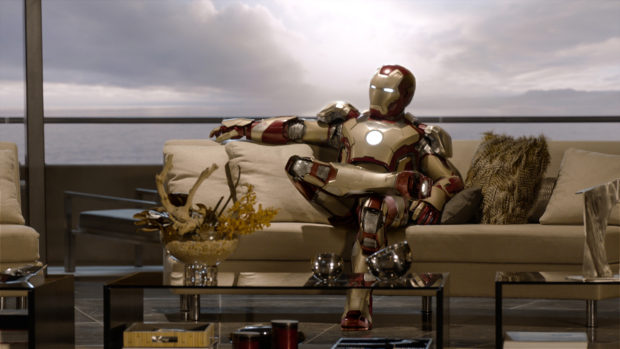 And yet it’s true to its comic book source material, borrowing from two major story arcs, “The Five Nightmares” and “Extremis,” smoothly blending them and making them cinematic. Even the Mandarin, a comic book villain and stereotype, translates to the screen with an air of believability yet not losing his larger than life quality. (And Kingsley seems to be having a good time, too.)

It wouldn’t work nearly as well without Downey at the center, but Gwyneth Paltrow really holds her own revolving around him. Cheadle has an easy chemistry with Downey, and Pearce provides a nice dark reflection to Tony Stark.

Where will it go from here? One of the better points about the film is that the larger cinematic universe, while noted quite a bit, stands apart. Iron Man 3 is watchable without seeing the other films, and it’s not suspended connecting others together.