Charlize Theron can kick ass with the best of them. Let’s get that out of the way. If after Mad Max: Fury Road, you had any doubts, Atomic Blonde erases them. Every fight scene director David Leitch stages, Theron is controlled fury, not just fighting but acting. There’s not a moment that her Lorraine Broughton separates from Theron.

I already thought Theron was an action star if she wanted to be; Atomic Blonde has sealed the deal. And on that alone, it’s worth watching. If you’re coming for plot, though, Leitch teaming with screenwriter Kurt Johnstad leaves things a bit cold. 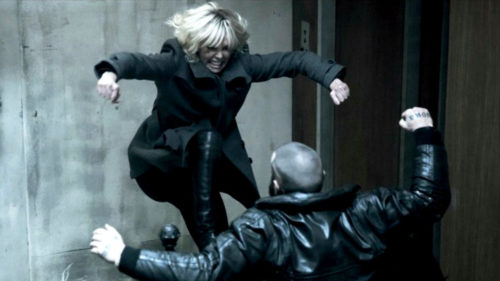 Working off of the Oni Press graphic novel The Coldest City by Antony Johnston and Sam Hart, the film takes a serviceable but small cold war thriller and makes it an over the top spectacle. Over the top neon visuals (because all of the 1980s was neon) with an appropriate selection of New Wave songs combine to make electric blue cotton candy dusted with hard action. But if you want to understand the plot, read the graphic novel which is grey and spare, likely how Berlin actually was prior to the fall of the Berlin Wall.

But then, you can’t play “99 Luftballon” in a graphic novel to black-and-white panels. 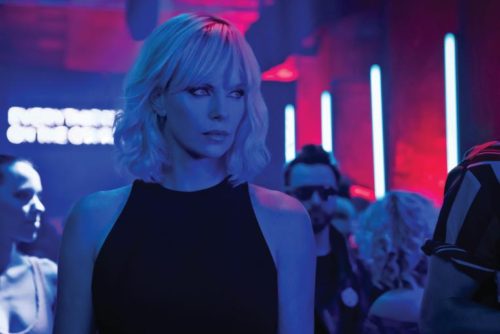 Like the graphic novel, the film essentially begins with Broughton undergoing a debrief after a mission that may or may not have gone wrong. Stuck in a chilly blue room with Toby Jones and John Goodman, she’s been caught up in the search for a list of every agent working on either side of the Cold War — MI-6, CIA, KGB, and maybe even K-B Toys. The film takes this macguffin and somehow makes it both simpler and far more complicated than Johnston’s original vision.

Getting it involves time, timepieces, and the sexily debauched David Percival (James McAvoy), an MI-6 agent who has gone native in Berlin. Maybe all that music we’re hearing is just playing in his head. There’s also relatively inexperienced French agent Delphine (Sofia Boutella) who also has great hand-to-hand combat skills. But she’s really there to look good under the neon lights and silk sheets of Theron’s bed in her terrifically 1980s movie hotel room. 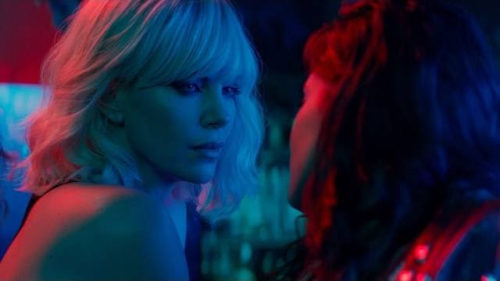 They’re all good actors carrying a thin piece to entertaining heights, including Bill Skarsgård as a leader of the East Berlin youth movement. If the name sounds familiar, it’s because he’s about to make an impact as Pennywise in IT, and it’s nice to see him play someone relatively moral before he terrifies audiences in September.

It’s all competently done, moving forward at a brisk pace, with some clever set pieces that are all out of the heads of Leitch and Johnstad. With Leitch helming Deadpool 2, it’s a sign that that franchise is in good hands. And if it seems like this review spends a lot of time looking to the future, it’s because for all its bombast, Atomic Blonde is a trifle, more a great resume piece for better things to come.

I don’t want Charlize Theron to play James Bond; I want her to play an action hero in a movie better than a James Bond film, because it’s high time for that. She’s absolutely a cornerstone in the future of action movies, a great actor with great action chops. It’s just a shame that Atomic Blonde isn’t a great movie.