It may seem a little early to start ramping up for Halloween, but let’s face it — horror movies are evergreen. Or ever red, if you prefer. And if you want to host a screening of your favorite film, amateur monster mixologists Jon Chaiet and Marc Chaiet have just the thing for when you have to invite over your boofriends and ghoulfriends. Sorry — after reading Let’s Get Monster Smashed, you sort of hit that zone.

A mixture of simple cocktails to alcoholic works of art, this recipe book has what I’d demand of one that makes me say, “whoa, that’s way too hard.” It’s written with a sharp sense of humor along with the requisite monster puns, and it actually tries to break down the steps in crafting quality cocktails.

More importantly with its theming, it suggests a movie for each drink, with a bonus drinking game and theming for films in Full Moon’s Puppet Master series. It doesn’t seem like the Chaiets are connected with Charles Band’s company; more they sincerely love the ridiculous goodness of grotesque marionettes committing mayhem. (As a side note, I have a soft spot for that series as well, in addition to every issue of the comic book for reasons I still can’t explain.) 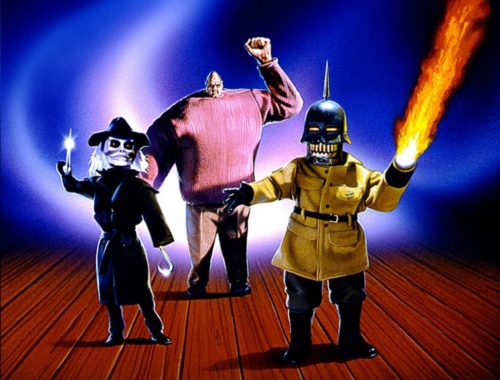 The difficulty levels range from simple — the Silver Bullet for An American Werewolf in London is pretty much just beer and tequila — to complex that requires that you’d better be having really appreciative friends over. The Harlequin Hooch for Killer Klowns from Outer Space is a work of art if you can pull it off. There are also a couple of drinks that make me think you’d probably have a couple of drinks beforehand, if you’re going to theme with Children of the Corn or The Silence of the Lambs (it involves chicharrones).

However, they’ve also included a Virgin Sacrifice section, for those parties involving more teen audience-oriented fare like Scream or The Craft. That’s a nice touch. There are still alcoholic beverages for more family-oriented horror like Ghostbusters and The Twilight Zone.

If anything’s missing from this book, it’s an actual guide to the movies themselves. This assumes you already know them and love them, and are just looking for the right horror apertif. And it does go deep — all the way to Puppet Master 10. You may notice, as well, that some of these movies had their heydays in the time of the VHS. So I’m a little disappointed that Sorority Babes in the Slimeball Bowl-a-rama has been omitted. But with 55 drinks included, something was bound to be overlooked.

They guide you through all the equipment you might need, and let’s face it — if you’re a horror film aficionado, the party is going to be year round.

If you can’t find Let’s Get Monster Smashed at your local bookstore (or at Dark Delicacies in Burbank), try this Amazon link.

Fanboy Planet is affiliated with Amazon and Bookshop.org. Items purchased through links on this site may generate revenue for the fanboys running this site.