It’s 1938. The world is on the brink of war. Months earlier, one of America’s brightest heroes, Amelia Earhart, disappeared somewhere in the Pacific. That much is true. That one of her closest friends would have been Pat Savage, cousin to Doc Savage, is fiction, but it’s a good launching point for an adventure that combines the Man of Bronze, a fantastic superweapon, and historical speculation, all things that pretty much make for a good Doc Savage story.

Earlier Dynamite issues of Doc Savage have updated the character, jumping around in time from the 30s to modern day, and though they were fun enough, they didn’t feel quite right. Doc Savage: The Ring of Fire is a Doc Savage story that feels like a good companion to the current novels being written by Will Murray, or the Marvel black-and-white magazine of the 70s. (That’s praise, folks.) The original pulps didn’t cross over with real world figures (except Hitler), but if they had, The Ring of Fire would fit right in there, too.

Written by David Avallone, who handled Dynamite’s The Shadow/The Twilight Zone crossover last year, the book begins boldly with a silent dream sequence — one thing that comics can do that the original pulps couldn’t. Pat Savage watches her cousin Doc go up in flames at the foot of an active volcano — but it isn’t the lava that does it. A hooded figure sets Doc on fire, and as Pat mourns… well, the dream sequence no doubt sets up more to come in the mystery, because in their waking life, Pat and Doc get a call from FDR himself that a “baby volcano” has formed in the Pacific and damaged a battleship. It’s mysterious, unnatural, and something that of course only Doc Savage should investigate. The Man of Bronze promises Pat that after he and his crew look into FDR’s request, they’ll spend some time searching for her friend Amelia, who disappeared in approximately the same region. 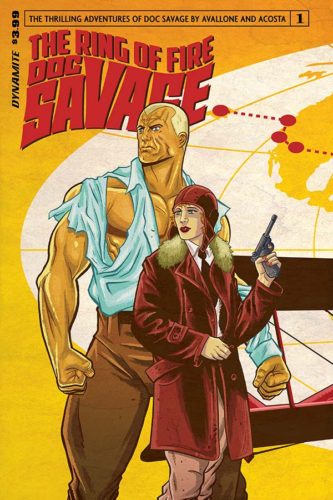 Avallone knows exactly what bells to ring with this book, offering touchpoints for fans and straight ahead mystery for those who might just be casually picking it up. (I honestly don’t know if there are casual readers — as a long-time Doc Savage fan, I always hope there are.)

Artistically, this is the best Doc we’ve seen in comics in a long time. Dave Acosta, who teamed with Avallone on both The Shadow/The Twilight Zone and a page in Love Is Love, gives every character a bold, consistent look. A few panels even hearken back to Ross Andru’s work on the first Marvel comics, how a lot of young kids in the 70s got hooked on Doc Savage. Of course, Avallone trusts Acosta as a collaborator, because opening with four wordless pages is a risk — one that Acosta pulls off beautifully.

The mystery begins, and it’s more than enough to satisfy long-time Doc Savage fans. The Ring of Fire is also just good comics, and we’re always happy about that.