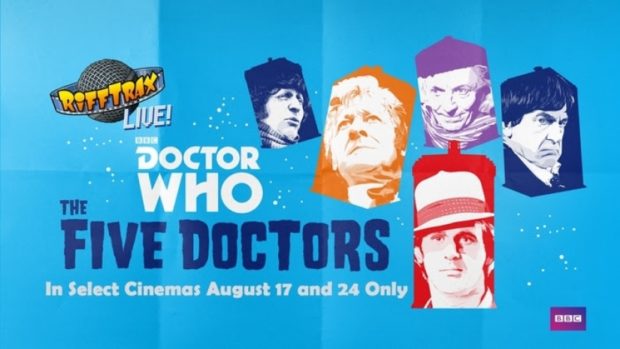 Modern audiences watching old Doctor Who episodes can be forgiven for rolling their eyes at the sometimes very cheap effects and occasionally glorious moments of ridiculousness. But can we tolerate when professional hecklers hurl their barbs at a beloved episode? Probably, because it’s Rifftrax Live. Fair’s fair; if you’ve laughed when these guys took on a movie you didn’t like, then you should laugh when they take aim at Doctor Who. Especially since the BBC is cooperating.

On August 17 and August 24, theaters all across the United States will show “The Five Doctors,” with Mike Nelson, Kevin Murphy, and Bill Corbett of Rifftrax doing what they do — riffing and ripping. Tickets will be available starting April 13, 2017.

Let’s let them tell it:

Will we see you there?