Stop us if you’ve heard this one, especially from Ivan Reitman. Three slightly odd guys and a hot woman find themselves in the midst of a disaster of Biblical proportions. Dogs and cats living together…except this time no one can tell which are the dogs and which are the cats, and why are there blue apes running around without noses? Yes, it’s unavoidable. On the surface, Evolution looks just like a science fiction version of Ghostbusters, and sometimes it tries too hard to earn that shorthand. But it has a different vibe to it, and stands better on its own than it knows.

Instead of ghosts, an asteroid plummets into the Arizona desert. Would-be firefighter Wayne Green (Seann William Scott) practices saving his female mannequin at the exact spot the asteroid lands, sending him, his car, and half of his dummy flying. Called out to the scene is Dr. Harry Block (Orlando Jones, in a strange echo of the Bill Murray role), a geology professor at the local junior college. More interested in scoring with co-eds than actually understanding his field, Harry brings along a fellow teacher to keep him on task. That teacher, Dr. Fox Mulder, here known as “Ira Kane,” holds a secret deep within himself that he masks with flippant remarks, a deep-seated distrust of the government, and a largely immobile face. 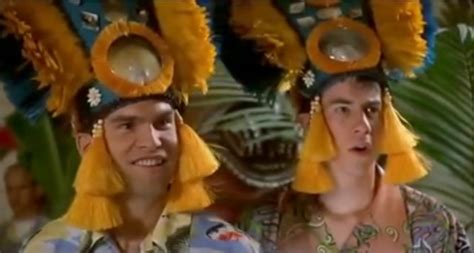 The asteroid creates a huge cavern, simultaneously leaking a strange blue goo and subtly creating its own atmosphere. Harry and Ira chip away a sample and return to the college. An over-exhausted Wayne flunks his firefighter’s exam in a mildly amusing slapstick sequence, thus forcing him to remain the pool manager/whipping boy at the local Country Club. (Yes, a little Caddyshack gets thrown in, too.)
Due to incredible cellular growth in the goo, Ira convinces Harry to bring his geology class back to the landing site for a field trip.

Upon returning to the cavern, they discover the atmosphere has grown thicker, and now mushrooms and planarian worms litter the floor. Once exposed to Earth’s regular atmosphere, the worms die. But all over the nearby town, the worms escape to find that they can survive in water. And there they evolve into new, more advanced, and uniformly deadly life-forms. Wayne encounters a tiny killer seal in the water filter, but shakes it off. Later when a member of the club has an unfortunate encounter with something bigger, Wayne knows enough to find those college dudes he met earlier. And thus our trio is born. 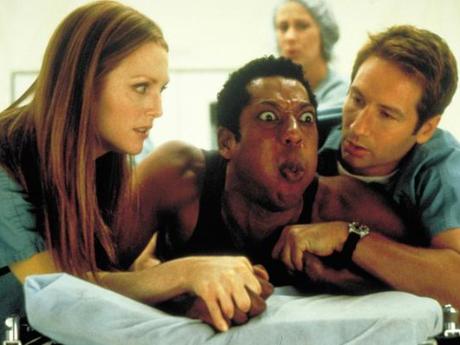 Wait! Where’s the hot chick? She’s there, too. Unlike Sigourney Weaver, Julianne Moore’s Allison Reed does know what’s going on from the very beginning. She’s an uptight scientist brought in by the Army to keep a lid on the impact site. And because Harry says so, she has a burgeoning crush on Ira. (What is it about Duchovny? Don’t women know he’s having an affair with Larry Sanders?) To make her funny, though, Allison is sporadically accident-prone, a bit that truly doesn’t get used enough to make it ring true. A couple of dialogue quirks hint that something more was originally scripted, but it doesn’t make it through the final cut. With the final characters in place, our heroes are free to make the government look foolish, come up with the answers no one else could, and save the day. Which, of course, they do.

As a genre film, Evolution works pretty well. It has a clever idea at its core, and though the monsters look uniformly rubbery, even the eventual primates, the film visualizes its threat well. At the very least, too, as sci-fi heroes, Ira, Harry, and Allison never make stupid mistakes, and we want them to succeed. But then there’s Wayne. And there’s the fact that Ivan Reitman doesn’t make genre films, he makes comedies. And on that score, Evolution falters. 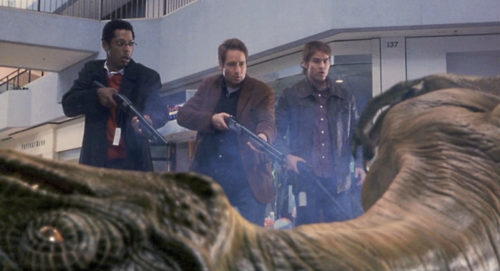 It has some funny moments, the funniest being blown by the commercials, but nothing particularly pants-wetting. It’s painfully obvious that Reitman didn’t cast comedians to make into serious characters, as he did with Ghostbusters. Duchovny and Moore are good actors with light sides, but that doesn’t translate into huge laughs. Jones struggles as mightily as he always does to give the film comic energy. He’s funny, but film after film with Jones proves that he cannot carry all the comedy in a movie. (See: Double Take, Say It Isn’t So, or better yet, don’t.) Scott plays air-headed heroism well, and it’s good for a few laughs. Dan Aykroyd and a few other old SNL and MAD TV players pop up for cameos, but all are largely wasted, in particular the potentially brilliant Sara Silverman, given little funny to do. 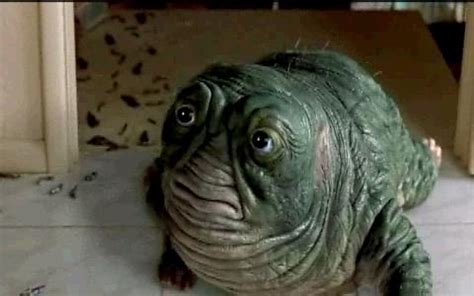 But again, the story works. It has an internal logic that never betrays itself for the sake of a cheap laugh. You will find yourself concerned as to what will happen next, though the ending feels rushed. If the characters are a little underdeveloped, at least they’re consistent. Some days, that’s enough.