It’s an old story: boy meets girl, they fall in love, they find out they’re actually brother and sister. To the Greeks, it’s tragedy. To American audiences, it should be classic farce, especially in the hands of the Farrelly Brothers. Unfortunately, the kings of gross-out comedy only produced Say It Isn’t So, leaving the movie in the hands of one of their friends. Though it tries hard to look like a Farrelly Brothers film, it falls a bit short. Call it Greek mediocrity.

The script, by newcomers Peter Gaulke and Gerry Swallow, has a lot of potential. In a voice-over introduction, orphan Gilly Noble (Chris Klein) tells us of his longing for family and finding that special someone. He spends his days in Shelbyville, Indiana as an animal control officer, but dreams of becoming a veterinarian. The only example of family he has belongs to his supervisor Larry (John Rothman), a man who prefers food to spending time with his wife. Larry persuades Gilly to have dinner with the family, which culminates in one of the best visual gags of the movie. Fans of the Jim Rose Circus Sideshow may find it tame, but it gives the audience hope for big laughs to come.

Gilly hears of a new hairstylist in town who gives terrible haircuts, but is so pretty that you don’t mind. He checks Jo Wingfield (Heather Graham) out, only to instantly fall in love. Of course, a cut from Jo can be a dangerous proposition, and Gilly ends up in the Emergency Room. To apologize, she offers to cook him dinner, and so he gets sucked into another nightmarish family evening. 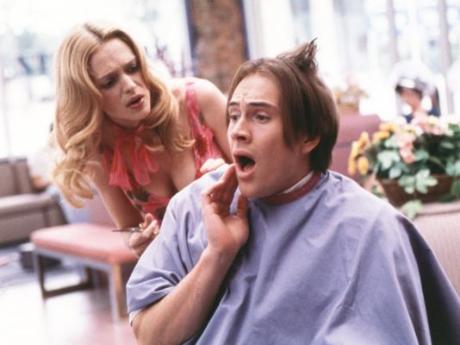 In the best white trash tradition, Jo’s mother Valdine (two-time Oscar winner Sally Field) still tries to compete with her daughter for men. Meanwhile, father Walter (Richard Jenkins) sits immobile, recovering from two strokes. Yes, it’s funny, though not quite as funny as the movie thinks it is. Upon hearing Walter speak through the Voicetronic 3000 (available at Wal-Mart, apparently), Gilly exclaims “Cool! You’ve got a robot?” Valdine strives to make dinner uncomfortable for Gilly, because she wants Jo to return to her wealthy ex-fiance in Beaver, Oregon. Despite her efforts, Jo and Gilly grow closer.

Valdine grows more and more frustrated as Jo wastes her time with a poor boy, until a seedy private detective discovers that Gilly’s mother is Valdine herself. In no time at all, the entire town brands Gilly a “sister slammer.” Adults shun him. Children taunt him. And the love of his life returns to Beaver, Oregon, and the millionaire who wants her. At least he now has parents. Then one day, a stranger shows up at the Wingfield door, with proof that he is the lost Wingfield scion. And then…

And then the movie strangely stops being funny. Of course Gilly has to cross the country to stop Jo from marrying the wealthy and possibly evil Jack Mitchelson (Eddie Cibrian, from TV’s Third Watch). Of course he has to have wacky misadventures, including a side trip to Mexico which is only implied rather than shown. But it’s just not all that wacky.

The only thing that saves the middle section is the introduction of Dig (Orlando Jones), a legless bush pilot with vague delusions of being Jimi Hendrix. After hitting Dig with his truck (and knocking his legs off), Gilly bonds with him. Lucky thing, too, because Dig provides plenty of exposition without getting too boring. Unfortunately, he keeps disappearing for long expanses of the movie, popping up just in time to keep the audience’s attention. 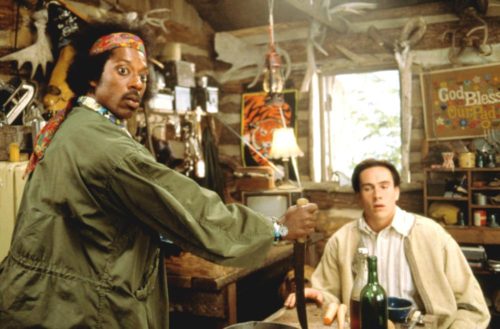 The biggest problem lies with the filmmakers’ insistence in telling too much of the story, rather than showing it. We must believe Jo’s fiancé is evil because Dig tells us he is; nothing in his behavior (until the very end, in a very labored revelation) shows us this. In fact, we first see Jack setting up a homeless man with a job and a place to live. Though he seems to have a shady past with a local deputy (Sarah Silverman, wasted as usual), that isn’t why we’re supposed to hate him. The movie repeats key plot points without being particularly funny about them, leaving Gilly to spend a lot of time protesting that Jo isn’t actually his sister.

The cast works hard at convincing us that this is funny. It partly fails with the characters that, quite honestly, we’ve seen before. Klein does his patented dumb gentle soul; it works more often than not, but it’s not surprising. Maybe the upcoming Rollerball will help him stretch. Graham continues to be earnest, which has worked for her career so far. As the scheming Valdine, Field clearly relishes the chance to play the dark side of Mrs. Gump. Between her and Jones, the film gets a lot more comic energy than it deserves. And believe it, Jones works damn hard in every scene he has. He almost makes it worth it.

To be fair, Say It Isn’t So is the funniest movie of the year so far. It does have a really good pay-off. If you see it, you will laugh hard in many places. But it should have been more.