Put aside what you think you know because of a bad trailer or a bad attitude. You may not have the Ghostbusters you wanted, but you’ve got a Ghostbusters that’s better than you think. Paul Feig’s remake — really more of a slight reimagining — is solid, scary, and funny in its own right. If occasionally it gets overshadowed by the original (not often), it still destroys the bad taste of Ghostbusters II and sets up the possibilities of a new Ghostbusters franchise (which producer Ivan Reitman has promised, along with Dan Aykroyd, with the formation of “Ghost Corps”). Months ago, I was skeptical of this as a new franchise; now I’m a fan and really, really want to see the in-joke of Melissa McCarthy’s Abby Yates setting up franchises, because it somehow seems very much in character.

Like the original, it opens with hapless civilians encountering the paranormal, as Zach Woods’ tour guide at a “haunted” mansion finds that his ghostly schtick for the rubes has become a frightening reality.  Right out of the gate, director Feig raises the tension, appropriate for 2016, but doesn’t yet tip his hand. 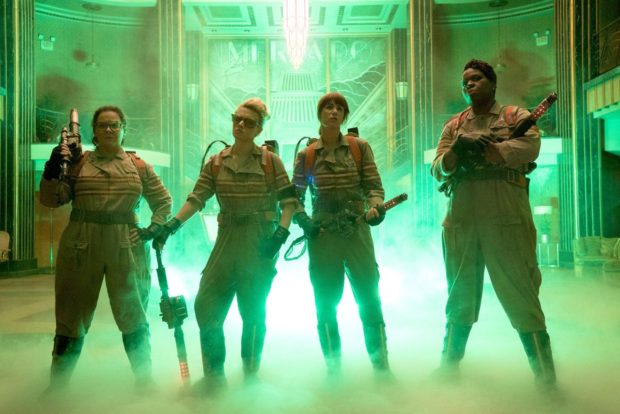 The call goes out to the team that will become the Ghostbusters, but they’re not just fighting being on the fringe of skepticism; reality television has pretty much made ghostbusting old hat and easily debunked. Erin Gilbert (Kristen Wiig) wants to ignore that she ever believed in ghosts, focusing instead on her promising academic career as a physics professor. To her dismay, the book she self-published with her childhood friend Abby has somehow gained in popularity in the age of Amazon, endangering her intellectual credibility.

Abby hasn’t given up on her belief in the paranormal, teaming with Jillian Holtzmann (Kate McKinnon) at a third-rate for-profit college to create the scientific equipment they need to track ghosts. Confronted by an upset Erin, Abby agrees to take the book down from Amazon in exchange for an introduction to the owner of the mansion suffering ghostly phenomenon. And yes, you’ve seen it in the trailer, but when set up in context, the first ghost confrontation (and their elation afterward) is tense, and for younger viewers, frightening. But you can’t have Ghostbusters without ghosts, and there’s a reason they’re starting to show up all over New York City.

That reason pulls in Patty Tolan (Leslie Jones), a subway train attendant who has her own encounter that leads her to the team that will be called the Ghostbusters. (They want to have a much more intellectual sounding name, but the media needs something more soundbite-y.) All through this set up, the script by Katie Dippold and Feig shows an intelligence that’s subtle — it does have to be a gross-out comedy at times, after all — and clever. Jones’ Patty is a case in point — early criticism called this a stereotypical character (sight unseen). Instead, the reason she wants to join the team is because even though she doesn’t have a glamorous job, she reads a LOT about the history of New York City, and can actually explain to the rest of the team why places might be haunted. The movie doesn’t play that up as much as it could, but it’s a great character element that will keep paying off. It’s never explicitly stated, but it’s just nice to have a script underscore that people’s stations in life have nothing to do with whether or not they’re interesting people. 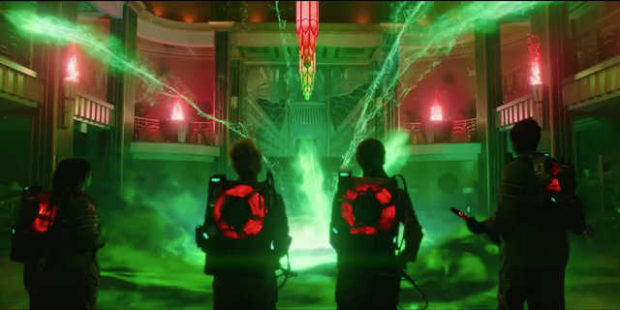 On the flip side, their antagonist Rowan North (Neil Casey) has been treated like dirt his whole life, bullied for likely believing in the paranormal, being smart about it, and giving off a vibe that Casey definitely plays up as creepy. He will have his revenge, and that revenge involves ghosts.

And oh, yes — Chris Hemsworth shows up as Kevin, the only applicant for the job of receptionist for the Ghostbusters. He turns the expected role on its head; where Annie Potts’ original Janine was sharp-tongued and absolutely a match for Harold Ramis’ Egon Spengler, Kevin might not even know how to spell his own name. But the awkward Erin pines for him, knowing full well that they have nothing to talk about. Luckily, it’s just played for laughs; there are ghosts to bust with no time for romance. 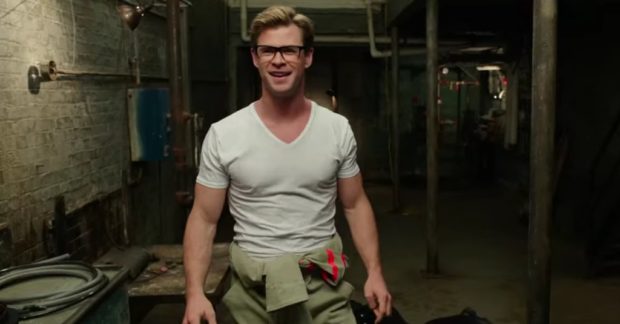 Feig doesn’t ignore the huge shadow of the original, either. Each of the surviving cast members (except the largely retired Rick Moranis) make cameo appearances, and they even find a nice way to pay tribute to Ramis. And to be honest, Bill Murray’s appearance here is probably fuller and richer than it would have been in the legendary Ghostbusters 3 script. He was bored with his original character; he seems to be having a good time here. The movie even brings back Robin Shelby, “Slimer” in Ghostbusters 2. There’s affection here, no denying it, but this movie also says the past is the past. (And that comment has more weight than you’d think.)

A couple of sequences don’t quite add up, with an obvious set-up for a scene cut from the narrative and thrown in to the end titles instead. But the energy, the enthusiasm, and the game-changing for a new generation makes up for it. McKinnon is going to come out of this a deserved star — Holtzmann has a lot of the rhythms of her Saturday Night Live characters, with a barely contained glint of madness in almost everything she does. But remember in the original when Murray says “we came, we conquered, we kicked its ass”? Holtzmann really does — my son walked out of the screening raving about how she had one of the best battle scenes he’d seen. Maybe that’s 12 year old hyperbole (well, yeah, it is), but it’s also a testament to a go for broke performance that actually overshadows McCarthy.

So who you gonna call? I’m all for it being Ghostbusters in 2016.

About Derek McCaw 1964 Articles
In addition to running Fanboy Planet, Derek has written for ActionAce, Daily Radar, Once Upon A Dime, and The Wave. He has contributed stories to Arcana Comics (The Greatest American Hero) and Monsterverse Comics (Bela Lugosi's Tales from the Grave). He performs with ComedySportz San Jose and ShakesBEERience, in addition to occasional screenwriting and acting jobs. If you ever played Eric's Ultimate Solitaire on the Macintosh, it was Derek's voice as The Weasel that urged you to play longer. You can buy his book "I Was Flesh Gordon" on the Amazon link at the right. Email him at editor@fanboyplanet.com.