Out of yesterday’s Marvel NOW! Previews catalog, a few upcoming titles stood out as being a bit left field. There were the spin-offs that may be unnecessary, but make sense in terms of movies and TV (Doctor Strange and the Sorcerers Supreme, Iron Fists). Many fans are concerned that the only overt X-Men title, if it is that at all, is Death of X.

But there’s another interesting trend. In light of the success of Deadpool, perhaps, Marvel is digging up every semi-comical antihero they have in their catalog, which admittedly aren’t many. (I’m still surprised that with the runaway success of Harley Quinn, we aren’t seeing an intercompany crossover Deadpool/Harley Quinn one-shot, and that DC hasn’t tried to revive Ambush Bug more in line with his slightly darker earliest appearances.)

Today Marvel released cover art for Foolkiller, a character initially created by the satirical Steve Gerber, and who has morphed a few times over the decades since. At one point, a version of the character had powers very much like Deadpool’s — basically immortality, which was used to tragic effect. As a character name, Foolkiller has snap and pizazz, and the premise described below sounds interesting. As a concept, it just occurred to me that it’s odd that Disney-owned Marvel would publish characters that, if filmed, would have to be released under their defunct Hollywood Pictures label — which went defunct for the reason that Disney didn’t really want to be in the grim and gritty business.

But business is business. I wonder what Foolkiller would have to say about THAT.

Marvel’s Foolkiller steps into the spotlight this fall with a single quest: killing fools. Traditionally armed with a barrage of armaments, Foolkiller is adding a new weapon to his holster: a psychology degree and a desire to help villains reform. Problem is, if they DON’T succeed at reforming…well, he might have to kill them.

Speaking with Comic Book Resources, Bemis said, “You have an antihero who’s a vigilante, who enjoys getting into the minds of these people that, on face value, he would just shoot in the face. That’s the basic plot set-up. It’s really a fun set-up, and I get to do a lot with it.”

The saying goes that therapists become therapists because they are the ones who need the most help and that adage holds true for Greg Salinger, a.k.a. Foolkiller, “For Greg, he’s kind of an outsider in the normal person community, because he was a friggin’ vigilante and he’s actually a lunatic,” continued Bemis. “I think all of my work will probably have that theme…there’s always some kind of fish out of water-ish scenario, because that’s my neurotic thing.”

Lay back and prepare for some of the most demented villains of the Marvel Universe to unload all of their problems on the mental health merc ready to help their minds. And if not, then he may have to prescribe a more violent solution.  How does that make you feel? 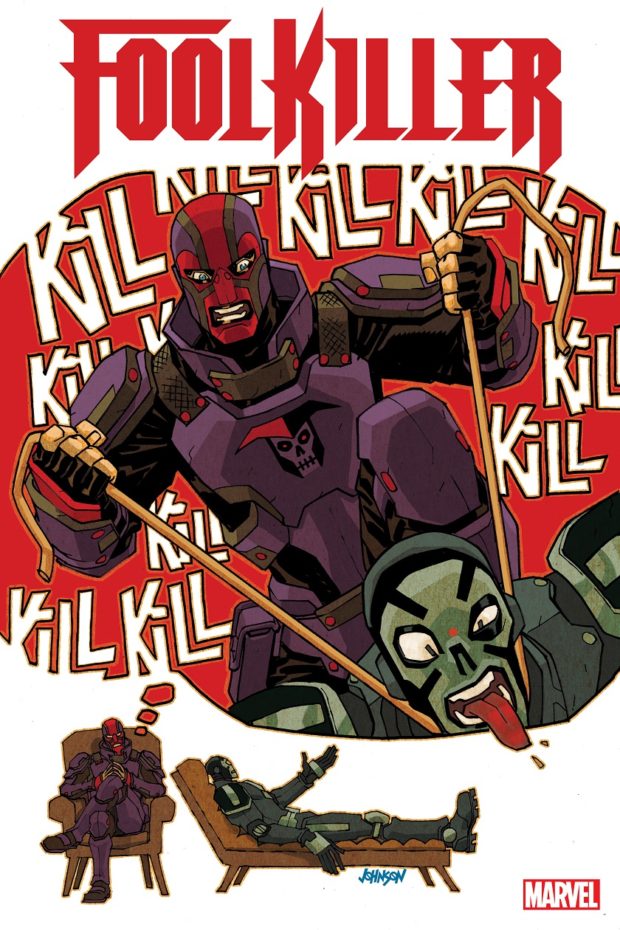