If I told you that I saw a great movie featuring a young girl with powers she cannot control, that the government wants to destroy, you could be forgiven for thinking I was talking about Logan. But Prodigy is quieter and closer, an intimate film that builds tension through an almost real-time game of cat and mouse between a (presumed) psychopathic 9-year-old genius who is even more than she seems and the child psychologist brought in to save her.

Writer/directors Alex Haughey and Brian Vidal owe more to The Twilight Zone than X-Men, and Prodigy feels like one of the most successful progeny of both. Though mutant power figures into the story, it’s the human drama that holds our attention.

When we first encounter Fonda (Richard Neil), he’s playing a game of chess against himself, convinced it’s a good way to challenge one’s own way of thinking. And at least you never lose, though from a different perspective, you never win either. Recruited by Olivia, a former college classmate now military officer (Jolene Andersen), Fonda has little idea what he’s about to face: a straight-jacketed little girl seething with contempt and betraying little emotion.

Ellie (Savannah Liles) has blown through a series of psychologists that Olivia has brought in to try and reclaim the girl’s humanity. Instead, the child has manipulated them into unrevealed horrors like a miniature Hannibal Lecter. On top of that, she’s telekinetic. The race is on to see who can uncover more about the other before Colonel Birch (Emilio Palame) shuts everything down — including Ellie.

It’s taut plotting from Haughey and Vidal, taking the mental chess game into a literal one without overplaying it. Their direction hums along, and the story they’re telling could almost be a play, as the verbal sparring is nimble, fast-paced, and always intelligent. When actual acts of violence occur, there’s an extra shock to realize that we’ve already been set on edge by the emotional damage Ellie tries to inflict across the steel table in her cell.

With a claustrophobic setting, everything has to turn on the performances. Perhaps the most frightening thing is that Liles seems like the strongest in the ensemble — cold, calculating, and absolutely convincing as a girl with an IQ off the charts. It’s up to Neil, then, to exude warmth, and to continue The Twilight Zone parallels, he has a manner reminiscent of Richard Long. Everything’s in the eyes, no matter where his mouth turns.

Prodigy deserves a life beyond the festival circuit, an engrossing sci fi film that fits somewhere between Legion and Logan. As for Haughey and Vidal, Prodigy marks a promise — hopefully many more films that remember to add heart to the action. 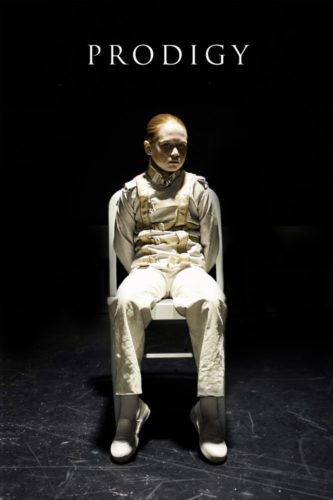