Hugh Jackman deserves applause and appreciation. He’s been the best there is at what he does since 2000 and what he’s done is play Wolverine in six X-Men movies (some of which were simply cameos) and now with Logan, three spin-off movies of the iconic character. He’s always played Wolverine wonderfully; in fact, he’s gotten better at it with age – pretty good for a character whose mutant power is a healing factor that makes it a challenge to show his true age. Until now, that is.

James Mangold returns, after helming 2013’s The Wolverine, unleashing Logan, the character and the movie, in the ultraviolet R-rated territory the feral protector always deserved. The result is Jackman’s best work as the character yet and a surprisingly funny and poignant reflection on life and death as well.

The year is 2029 and the Man Formerly Known as Wolverine can be found working as a limo driver in El Paso, Texas, tolerating entitled suits and loud broads as his primary clientele. Some recognize him as Wolverine, but he’s just trying to keep a low profile and store away some cash so he and Charles Xavier (the indelible Patrick Stewart, reveling in the R-rating) can spend the rest of their days sailing the ocean on a boat – call it End of Days goals. What are the chances of Logan and Charles sailing off into the horizon peacefully? 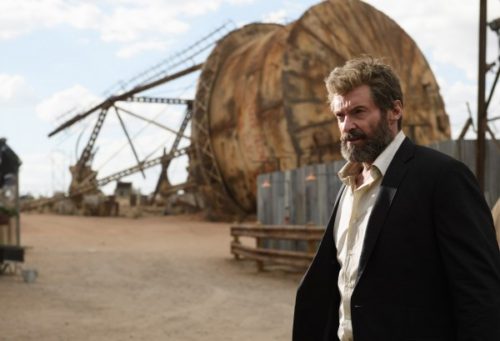 And where is everyone else? Where are the X-Men? We learn there haven’t been any trace of mutants within the past twenty-five years. How come? It doesn’t matter. Not knowing adds to the mystery of this setting. Logan is now most concerned with as many people as possible not knowing his whereabouts and his motivations. He’s holed up south of the border in a dilapidated factory in the middle of nowhere, caring for an ailing Xavier, with the help of Caliban (a splendid Stephen Merchant, exuding great chemistry with Jackman), who’s got a knack for sensing and tracking other mutants. Charles is a handful nowadays, secluded in what looks like an empty old water tank and often quite a cranky octogenarian due to the meds that keep his massive seizures at bay. It’s not good for anyone when the world’s most powerful telepath is suffering from a degenerative brain disease. Taking care of Charles, though, could be the only thing keeping Logan alive.

Haunted by his memories and quite possibly living with survivor’s guilt and understandable regrets, Logan would take his own life (he’s even got an adamantium bullet to do the job), but he feels needed, and if he has any other super power besides regeneration, it’s his instinctual call to protect others. He may not be in top shape anymore – his own mutant power is fading and he now needs reading glasses – but his determination and resilience is still intact. 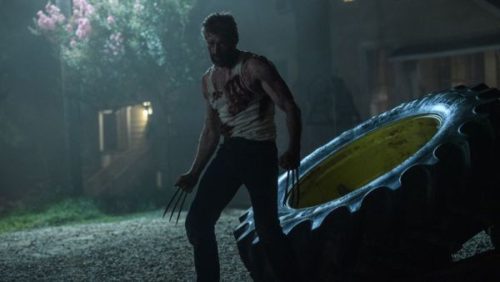 Into their lives comes a quite and intense eleven-year-old named Laura (introducing Dafne Keen, a refreshingly delightful presence), who’s got a secret past – let’s just say it involves recently escaping from some bad bioengineering hombres in a Mexican lab – one that resembles Logan’s back story (which has been revisited on the big-screen almost as many times as the death of Thomas and Martha Wayne) and abilities. Charles perks up with delight, since this is the first new mutant they’ve seen in years (Caliban’s a little slow on the uptake, apparently). That being the case, such a rarity will have pursuers and Laura is being hunted by Donald Pierce (Boyd Holbrook), an enforcer and leader of the Reavers, a band of half-cyborg mercenaries, employed by Dr. Zander Rice (Richard E. Grant), a specialty surgeon (translation: mad scientist) at a mysterious company called Transigen.

With Laura now in their lives, Logan’s plans change when Charles persuades (more like pesters) him to drive him and the girl to Canada, to a supposed safe haven for mutants called Eden where she’ll be safe. Of course, it’s not a leisurely trip as a frustrated Logan has to deal with the stubbornness of his old mentor and the new paternal responsibilities of a feral child, all while the trio are hunted down.

The opening scene in Logan wastes no time distancing itself from the PG-13 crowd. You’ll get the idea from Jackman’s first utterance. Then you’ll be convinced when you see how he brutally dispenses some local thugs who happen to be in the wrong place at the wrong time, underestimating a guy we know all too well. It’s understandable though, considering this disheveled bearded character can barely stand on his own two feet, walks with a limp, and prefers to remain drunk or asleep. But we know what happens when he’s pushed too far. Or do we?

Logan’s fury and anger have never really been explored on screen like we see in Logan. The closest we’ve come to seeing his trademark “berserker rage”, as it’s referred to in the comics, was when Xavier’s mansion was invaded back in X2: X-Men United. But honestly, for an adamantium-clawed killer, that was pretty tame as have been most of his other on-screen skirmishes. In Logan we’re shown what a lashing would really look like from a guy who’s done holding back. He’s fed up, so when he’s pushed, no one is left standing. He’s not having any of it any longer. I know I’m not going to be the only one who will prefer this iteration of Wolverine over any other that Jackman has previously portrayed. It could be because there’s a more palpable weariness now, his fuse is shorter and there’s a longing to just be left alone, which is probably the closest we’ve come to witnessing a relatable Logan.

It’s easy to see why Jackman has said this is his swan song playing the character. It’s appropriate since this is his best portrayal yet. It’s not just that he’s tired of his daily routine of six meals and three-hours workouts, it’s that this screenplay by Mangold, Scott Frank (Out of Sight and Minority Report) and Michael Green (who will have a banner year with his upcoming contributions to the Blade Runner and Alien sequels) provides the actor with the most complex and rich characterization yet of his recognizable role. Like Eastwood portraying William Munny in Unforgiven, it took Jackman just the right time in his career to take on this visibly older, worn-down Logan, who’s trying to drink away the “incident in Westchester” as he wallows in self-loathing.

Coincidentally, Logan is very much like a modern-day Western, in particular George Stevens’ Shane, a classic which is cleverly incorporated into the movie. The parallels may be obvious, yet it never weighs down or detracts from the story we’re invested in.

Logan isn’t totally unique. You may find it resembles Little Miss Sunshine and Mad Max Beyond Thunderdome at times, in the best way possible. But so invested are we in these characters and the tone Mangold provides that none of that really matters.

Thankfully, the screenwriters aren’t just adapting Mark Millar’s Old Man Logan story, since that would be too outlandish and bizarre to adapt, not to mention most of the cinematic equivalents of those supporting characters in that story reside at the House of Mouse. While there is a semblance of that storyline here, this is actually a more compelling story than Millar’s work, incorporating characters creating by comic writers Chris Claremont, John Byrne, Craig Kyle, Christopher Yost and Billy Tan. Like my favorite back issues of Uncanny X-Men (issues 228 and 268, of volume one, for example), the writers here know that stand-alone stories, focusing on two or three main characters, allow for a more compelling story. Rather than littering the movie with a busload of mutants, like the worst X-Men movies (The Last Stand and Apocalypse), this movie values the dynamic between Logan, Charles and Laura, and viewers are awarded with a near-perfect final bow for James Howlett. 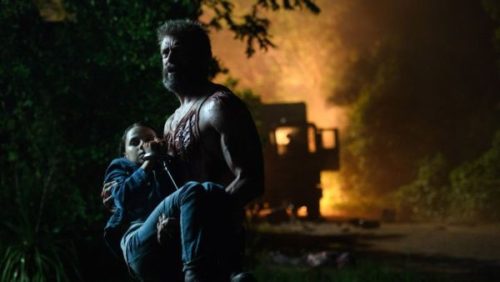 Logan can be poignant, humorous and bleak all at the same time, like when our uncanny trio receives unlikely assistance mid-movie. A farmer and his wife (played by Eriq La Salle and Elise Neal) come to their aid, offering them a hot meal and some much-needed rest. This respite provides some of the best moments of the movie, reminding viewers how much these three characters need each other. But such peace is as typically short-lived for these characters as its always been and we’re soon reminded how there’s no escaping the violence that always finds Logan.

You can expect complaints from parents about this movie, since some of them just don’t know any better and will relent to their child’s demands to see “the superhero with the claws” movie. That child will be exposed to a plethora of amputations, decapitations, human kebobing, generous spurts of blood, as well as violence against children.

Yes, it’s true. Logan is the Wolverine movie you’ve always longed for. Heck, it’s the Wolverine comic you’ve always wanted to read. It’s a movie as savage as its main character and if this is indeed the last time we’ll see Jackman unsheathe his claws, it is an emotional and rewarding end. 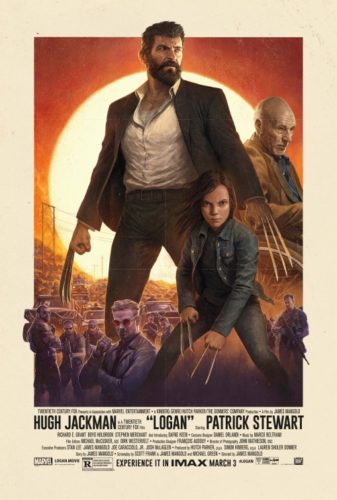 About David J. Fowlie 6 Articles
David's first film review for Fanboy Planet was "The Spiderwick Chronicles" in 2008 and has been a Chicago-based editor/writer for the site ever since. In 2009, he founded Keeping It Reel, where he remains the editor-in-chief and main film reviewer. David continues to review movies and cover film festivals there, while maintaining his membership in the Chicago Film Critics Association. He also volunteers with The Hero Initiative yearly to give back to the comic book creators that have and continue to inspire him.