As Wonder Dogs go, Bob as Agent 11 holds his own against such giants as Hooch, Poochinsky, and Chuck Norris. He can lead mobsters into wacky traps like a canine Culkin. Public park purse-snatchers have no chance against him. He can out-act Paul Sorvino. Granted, he’s no Hosehead from Strange Brew, but then, that dog was in a good movie. Poor Bob has to slum it in a strange Nick, Jr. version of a Farrelly Brothers film.

Agent 11 has racked up quite an FBI career by the time See Spot Run begins. Already ranked as the number one crime-fighting dog in America (which begs the question, why are there no cop dog reality shows?), we meet Agent 11 as he completes a huge drug bust. Partnered with Agent Murdoch (Academy Award nominee Michael Clarke Duncan – just wanted to rub it in), our canine hero not only exposes drugs hidden in paint cans, but manages to take down the local kingpin, Sonny Talia (Sorvino). Some may think our hard-bitten hero goes too far in his efforts, but he gets the job done. And in cornering Sonny, Agent 11 only proves what Planter’s says: dogs like nuts. 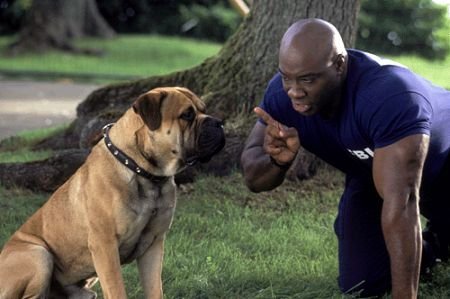 Meanwhile, the film introduces us to postal carrier Gordon Smith (David Arquette), whose route takes him through the notorious Bleeker Street. Each house on the street has a dog that hates postmen, and Gordon has armed himself with various low-tech (and, okay, we’ll admit, somewhat clever) defenses against them. After a series of slap-stick battles that ends with Gordon flying into a tree (clearly, a student of Wudan Mountain), See Spot Run grinds to a halt in order to set up Gordon’s character arc.

See, Gordon hates dogs. But he loves his gorgeous neighbor Stephanie (Leslie Bibb), who has a little boy, James (Angus T. Jones), who loves dogs but isn’t allowed to have one. They all live in an apartment complex along with fellow mail carrier Benny (Anthony Anderson). Benny exists to provide hip-hop relief when the movie gets too slow. Of course, our definitions differ. Stephanie won’t date Gordon because she thinks he’s irresponsible and child-like himself, but she’s forced to leave her son with him when she goes on a business trip. (These things happen. In movies.)

Lest we forget (and it feels like the movie has), the vengeful Sonny Talia has put a hit out on Agent 11, who is forced into witness protection. Sensing something wrong (this dog is smart), he escapes his transport vehicle and hides in Gordon’s mail truck, where James finds him. Through a misunderstanding that makes more sense than the rest of the movie, James ends up calling Agent 11 “Spot.” And by expertly exerting his pouty face, James convinces Gordon to keep the dog. Can a slow-witted slob and an uptight, ultra-conservative FBI agent share an apartment without driving each other crazy?

In a perfect world, Agent 11 would get back to the apartment and beat Gordon senseless. That would have been funny. Instead, we get to see the two soften towards each other and the kid as Gordon learns to be responsible and Agent 11 learns to lighten up, all while dodging two inept mob hitmen (played by, as is now required by law, two minor character actors from The Sopranos). We really wish we were making this up.

What See Spot Run lacks in story sense, it makes up in gross-outs. Mindful of its status as a kiddie film, it limits these to poo poo and fart jokes, which have their place. But this movie uses the same ones over and over. Yes, we suppose it is only justice for David Arquette to have to roll around semi-naked in dog crap, but must we watch it for five minutes? At least it has its priorities straight. Kids, remember: having your dog spit a human testicle into your hand is funny; kissing is ewwy. 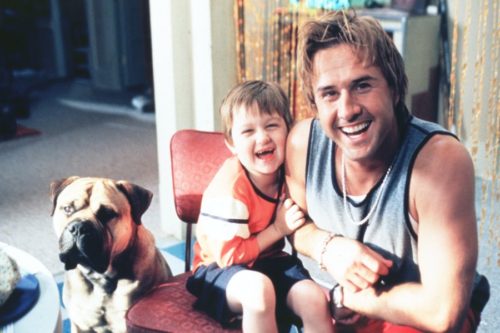 Despite their surroundings, several actors really try hard to ply their craft. Leslie Bibb cheerfully endures a variety of cruel pranks: getting covered in mud, sticking her face in a zebra’s rear, and appearing in a movie with David Arquette. She almost makes us forget that she really looks too young to be a mom and a high-powered businesswoman. (Bibb plays a cheerleader on the WB’s Popular.) Duncan and Sorvino both know they’re not in anything Oscar-worthy, and yet manage to not look embarrassed in any scene. Now that’s acting. The up and coming Anderson (from Me, Myself & Irene, among others) brings energy to all of his scenes, and provides one big laugh in an out-of-place break-dancing scene. But even with all this talent, there’s no escaping the huge hole in the center. 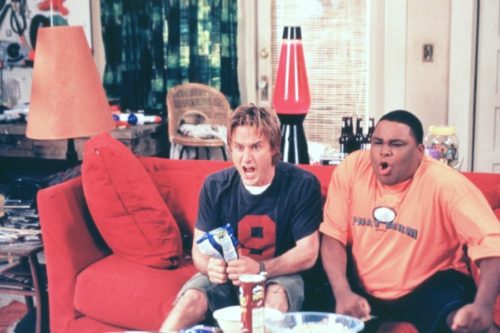 Here at Fanboy Planet, we tend to rag on David Arquette. Let’s be fair. We’re grateful that someone wants to compete with Adam Sandler as America’s Most Beloved Brain-Damaged Man-child. But he’s been coasting for far too long on this bit. It’s especially disappointing since, once upon a time, Arquette bothered to actually act. Now it appears he just shows up, eats too much sugar, and tells the director to roll the camera. The dog ends up being more entertaining.

Soon enough, it will be May and the studios will give us good movies again. Let us all be granted strength to last that long.