The first five minutes of Swordfish plays out like the wet dream of an angry film student. Sick of “Hollywood crap,” film-savvy villain Gabriel Shear (John Travolta) sits in a coffee shop casually spouting a deconstructive diatribe about how movies just don’t go far enough in their realism. What Gabriel really wants is a bit of the old ultra-violence. And of course, he goes about creating just that, blowing up a bank robbery hostage in a tense and eye-popping (though clichéd five minutes after The Matrix came out) glory.

All this proves that the angry film student wants to be part of the mainstream, too. Unsure of how to react – is this post-ironic or what? – the audience does the only thing it can do: shout “COOL!”

Swordfish then takes us four days earlier, to show us how Gabriel and his listeners (Don Cheadle and Hugh Jackman) reached their Tarantino moment. Stanley Jobson (Jackman) practices golf on top of his beat-up trailer in the middle of an oil field. Into this trailer trash moment drives the beautiful Ginger (Halle Berry) with an offer: accept $100,000 just to meet her employer, Gabriel. Stanley, you see, is quite possibly the top computer hacker in the world (a world where computer hackers look more like Wolverine than Toad), quietly serving out the terms of his probation. Because of his jail time, Stan has been denied visiting rights to his daughter, the only thing in the world that means anything to him. What Ginger really offers is the chance to change that. Oh, and the chance to gratuitously see her breasts, but Stan doesn’t know that. Thankfully, we do, and thus remain riveted. 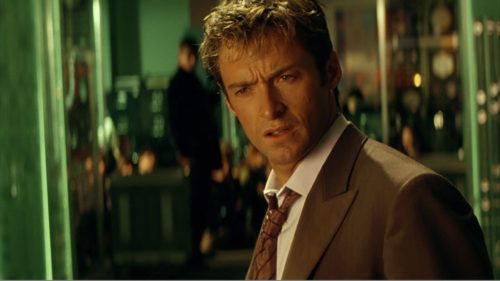 The FBI has been tipped that something is up, having captured another top hacker who ended up getting killed in their own interrogation room. Agent Roberts (Cheadle), the very man who arrested Stan, realizes that two top hackers in Los Angeles at the same time just couldn’t be coincidence. Not in the movies, it’s not.

Stan undergoes a test of his skills that is a joy to describe: he has sixty seconds to break in to the Department of Defense with a gun to his head and a blonde face in his lap. That alone probably got this screenplay sold. Needless to say, he passes the test, and learns the real plot. Gabriel considers himself to be a freedom fighter, and with the aid of a corrupt senator (Pulitzer-prize winner Sam Shepard), he has hatched a daring plan to gain access to $9.5 billion dollars in government slush money. His ultimate goal is to use this money for counter-terrorism, and he will stop at nothing, sacrifice anything, to achieve this. But things aren’t quite what they seem.

Realizing that the FBI has stumbled onto the scheme, the Senator gets squirrelly and withdraws support. Stan risks everything by visiting his daughter (whose mother may or may not be doing porn – oh, we’ve got wacky family courts in California). And Ginger, when not reading magazines while topless (gratuitously, unsettlingly, and well worth the price of admission), appears to be playing for several sides. With Stan torn between a sense of justice (his initial crime was to disable a government spying program) and the joyful challenge of cracking a 512 bit encryption scheme, things can only end badly, violently, and entertainingly. 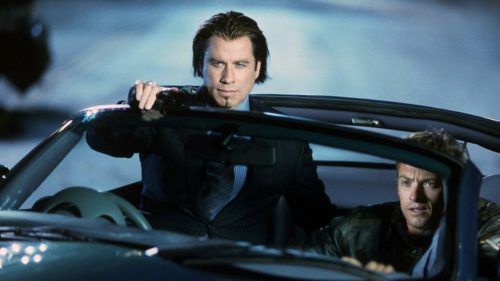 It’s not Dostoevsky, though a few plot twists indicate that Swordfish wants us to think it’s much smarter than it actually is. Aside from the opening monologue, little of it is actually all that well-written (credited to Skip Woods, but with summer movies, who really knows?). It carries the audience along at a good clip, with some great action sequences that actually don’t stop the plot cold. Director Dominic Sena does a good job of not reminding us that he directed both a lot of videos and Gone In Sixty Seconds. Credit must also be offered to Sena and Woods for making hacking look somewhat interesting. Most importantly, they’ve returned Travolta to what he does best: villainy without aid of stilts and prosthetics.

Though he looks a little bit like Mr. Sinister (hard not to make the comparison with Jackman and Berry in the same film), Travolta takes his performance just to the edge of over-the-top without falling completely over it. He’s smooth, cool, and in control of the action and himself. Thankfully, Jackman holds his own with Travolta. It’s only a matter of time before he gets the real Hollywood test of seeing if he can open a movie on his own. We’re betting he can. Cheadle brings his usual sincerity to the movie, but in a part that could have been played by any number of people. And Berry? Once you get past those breasts (or not), she’s an actress who has yet to prove that there’s much beyond her beauty. Thus far, it doesn’t matter, but it would be nice to know one way or the other.

The thrills of Swordfish may fade rather quickly after Tomb Raider, and there may be smarter movies on the horizon. But for now, we’re pleased, and the summer of 2001 doesn’t look so bad.