It’s still hard to tell exactly who’s allied with whom — and where Arnold Schwarzenegger stands as a real-time aged Terminator. But the vibe that Linda Hamilton is giving off… it feels like where Sarah Connor would be. She staved off the apocalypse once. She was in a mental hospital. She’s probably spent years battling PTSD, and some of that might have been spent in a bottle. So when she croaks out the opening line in this trailer… that’s a hard-earned croak, and a reminder that Hamilton is a pretty good actor in addition to being tough.

Though James Cameron might not admit it, I wouldn’t be surprised if Terminator Dark Fate echoes one of the plots of The Sarah Connor Chronicles TV series — that more than one machine intelligence exists, and one doesn’t quite see the point of wiping out humanity. Just speculation, but it was a good idea for a series that got cancelled too soon. 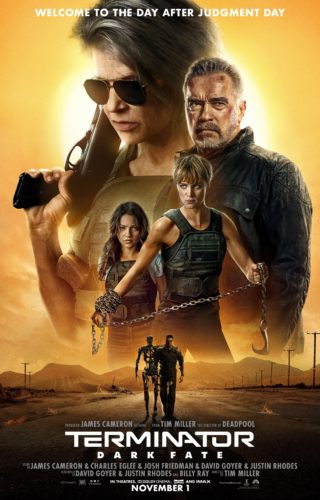