Writer Eric Peterson had an idea and a dream. Growing up reading comics like 2000 A.D. (home of Judge Dredd), Peterson conceived of the Intergalactic Postal Service, a hard-edged organization where as a servant, you’re anything but civil. It takes guts to get packages from planet to planet, and sometimes you spill them. Or they get spilled.

As Peterson put it as we sat down for an interview on Preview Night, “…it’s largely about America. It’s free enterprise.”

The IPS plays a central role in the book Peterson co-created with fellow writer Joe Aubrey and artist Darick Robertson. Originally presented at Comic-Con a few years back as Tooth & Mail, it’s become Space Bastards, and the first volume is available both through a Kickstarter and at Comic-Con right now in booth 1806. It’s a solid package for a fun over-the-top dirty space opera, selling for $30. In addition to Robertson’s main story art, it includes work from Simon Bisley, Boo Cook, Colin McNeil, and Clint Langley, many of Peterson’s inspirations from their work on 2000 A.D. But you know Darick Robertson right now from two of his series turning into TV shows — Happy! and The Boys.

“In the future, packages have trouble getting between planets,” Peterson told me. “Postmaster General Roy Sharpton comes up with the idea that if everybody delivering packages had to make sure they get there as if their life depended on it, they’d probably get there. So that’s what he does.”

Peterson explained further. “This originally enticed a whole lot of ex-convicts and people used to dangerous stuff. But truthfully now it’s become more of a social thing. Divorced ex-real estate agents, guys who have maybe been laid off from their accounting job, people just tired of the 9 to 5 have enlisted, because it’s better to be shot at for a living, than it is to feel truly dead every day. To do that, you have to join the Intergalactic Postal Service, and they become… Space Bastards.”

We talked about the book itself, and the array of artistic talent. “Gabo, who worked with us early on, has a short story in this (volume 1) as well. I grew up reading 2000 A.D. comics and Vertigo Comics. So I very purposely work with my heroes who did those comics. Darick Robertson, I grew up reading Transmetropolitan, he works with me on this. At the same time, Simon Bisley, obviously Slaine the Horned God. We just announced Glenn Fabry will be in the next book. Colin McNeil did ‘America,’ my favorite Judge Dredd graphic novel. I grew up reading all this stuff and I get a chance to work with my heroes now. And we’re all friends. I love all those guys. Teaming up with Joe (Aubrey) and getting to write this is a dream come true.”

Years ago, I had bought the ashcan of the first chapter, then called Tooth & Mail, and hadn’t really drawn the connection to 2000 A.D., but once Peterson said it, it all clicked. I asked him to go deeper.

“That stuff just changed my world. I had the pleasure of chatting briefly with John Wagner when we went over to Europe doing a short tour with this book. It’s hard for me. Space Bastards would not exist if it wasn’t for the creators behind 2000 A.D. and Vertigo. That stuff informs everything I do.”

There’s more on the way. While selling this finely hard-bound first volume, the team has three more done, so if you Kickstart it, you know the story continuation will happen. “Stuff takes time, right?” Peterson said. “Joe and I are impatient, so while certain things take time, let’s work on other things. We have an ensemble cast in an expansive universe, so, let’s do more stuff.”

“We’re pretty strategic about it,” he explained. “We realized that Tooth & Mail is the main Year One story, done by Darick Robertson, and we realized that was going to take a certain amount of time to finish. We said let’s do other stories to weave in and out of there, because I love it. And we’ve done that.”

You can join the Service, too. “We have our Space Bastards, meaning the people who buy the book,” Peterson laughed. “We say ‘Welcome, you’re a Space Bastard.’  We also have the artists themselves; they’re like our internal Space Bastards. We’re proud to call Simon Bisley and Glenn Fabry and everybody a Space Bastard.”

If you can’t make it by booth 1806 at Comic-Con, you can still pick up the book through the Kickstarter campaign here. Listen for the full interview with Eric on a future podcast! 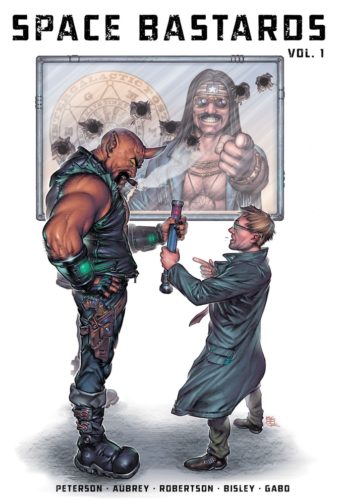