They call themselves the funniest YouTube channel you’ve never heard of. And they appeared at last week’s inaugural Silicon Valley Comic Con, with two panels — one on Saturday facing Jeopardy! champion Ken Jennings, who has become known for his wit as well, and then one on Sunday with comic actor Jon Heder (Napoleon Dynamite, Blades of Glory).

If you’re wondering what they all have in common, it’s not just that they’re known for being funny. They’re also all members of the Church of Jesus Christ of Latter Day Saints, aka Mormons. (Silicon Valley Comic Con got them second; they first appeared the Thursday night before giving a fireside chat at the Oakland Temple.)

And though their mainstream popularity may be taking off because of YouTube, all the members of Studio C first got broadcast the old-fashioned way — through their college television station, which is carried nationally through satellite, on BYU TV. That’s where their fanbase started, but as I said, they’re quickly growing in esteem in the mainstream. 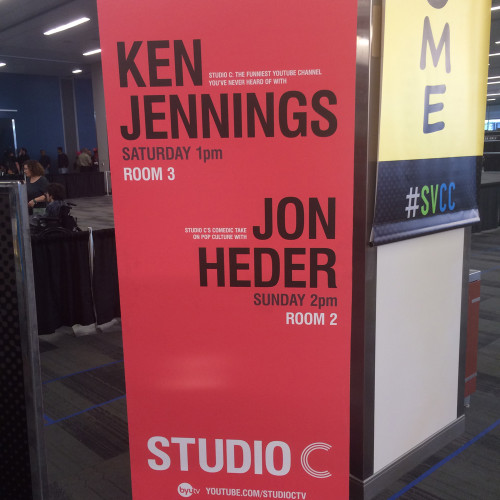 So I’ll confess that my son’s greatest disappointment about missing Silicon Valley Comic Con was that he had other commitments during both panels, and if he had commitments, so did I. I did not get to meet them, though the only thing my son knows more about than Studio C is Pokemon. THAT’s how big they are.

But my second confession is that the couple of sketches he had shown me had made me smile a bit, but not really laugh. I thought they had good ideas, but nothing really got me, and that’s what I told the people that asked me about them that weekend.

And then they released … this.

Forgive me for not understanding you before, Studio C — you just killed me with this sketch. Now I’m going to have to spend some time scouring their YouTube channel to see what else I’ve missed. Maybe we hadn’t heard of Studio C in time for the first Silicon Valley Comic Con, but if they come back for the next one, I’m betting that their panels will be standing room only — and we may need a bigger convention.