True story: the only one of Hasbro’s 4 inch G.I. Joe figures that I bought was the original Snake Eyes. Though Nate Costa and Lon Lopez convinced me to go to the films starring Channing Tatum, both Channing and I agreed they were terrible. But this reboot gives me hope, and not because they’ve replaced Ray Park with Henry Golding, who is, let’s face it, a much more charming actor than Park. It gives me hope because he’s not just the most interesting character by being the most mysterious, but it gives the mythos a place to build from.

Written by Evan Spiliotopoulos and Anna Waterhouse & Joe Shrapnel (is that his real name?) and directed by Robert Schwentke, Snake Eyes: G.I. Joe Origins does include Samara Weaving as Scarlett (another good casting call, but blink and you’ll miss her in the teaser) so long-time fans will get that tie-in to the larger G.I. Joe Universe. Like with Bumblebee, another successful Hasbro soft reboot, it’s a chance to hook us with an individual character and leave us wanting more, instead of giving us more than we can handle. Even without Nate and Lon to drag me to Century 22 in San Jose, I’ll be seeing Snake Eyes. 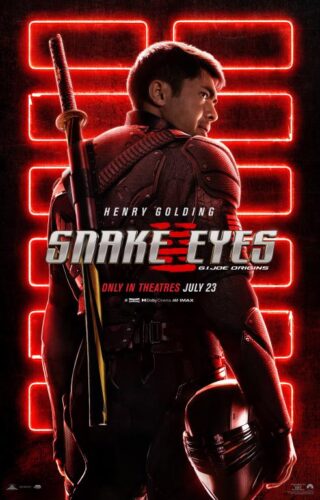