Despite the lurid cover art, the few captive women in Hercules and the Captive Women are presented in a way that are pure nightmare fuel. Their captor embeds them in the wave-washed cliff walls of his island, and if you hadn’t been sold on Italian sword-and-sandal movies having terrific production design, that would do it. The monster costumes, maybe not so much.

But of course they’re silly by today’s standards. Most people know the line from “Sweet Transvestite” about taking in an old Steve Reeves movie, without ever actually seeing one. The bad news is by this time Reg Park had taken the role of Hercules over from Reeves. The good news is that even almost 60 years later, it’s clear that he’s having fun and you’re supposed to, too.

Dubbed for a variety of reasons, Hercules and the Captive Women begins with faux history and ends in legend. Hercules has a vision of coming tragedy, and sets forth with his friends (and his stowaway son) to try and forestall the fates. Along the way he wrestles the aforementioned monster, Proteus. He finds Atlantis (the film is alternately known as Hercules Conquers Atlantis) and battles mostly identical blond warriors (who do have nifty costume designs). A lot of characters talk about Uranus, and yes, we’ll all giggle. The details don’t matter as much as the fun, and the set pieces which occasionally still work pretty well. 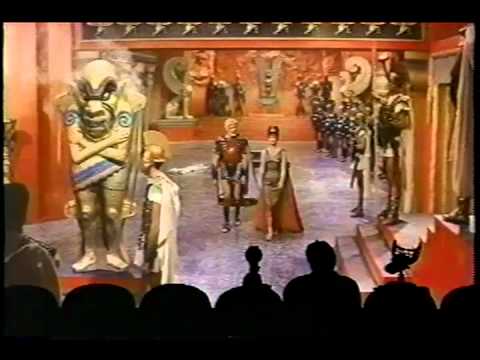 Lush though not a perfect restoration, this release from The Film Detective includes much more than just a Hercules movie. They’ve included the Mystery Science Theater 3000 episode that mocked the movie. (So for some of you, that’s probably worth the price alone.) But there’s also a documentary on the history of Italian “peplum,” the wave of mythical hero movies from Italy that made a star of Steve Reeves and almost did of Park. It provides historical context, a little Hollywood hucksterism, and a brief discussion of how it inspired other seemingly unrelated genres of film in the later 1960s. There’s also a companion booklet with a similar essay by film historian and writer C. Courtney Joyner, who scripted the documentary.

Basically, The Film Detective takes a lot of care with their releases. Every Blu-ray is a mini-class on cinema that, depending on your point of view, is classic, fun, campy, and/or bad. Or something combining all of the above. While the print isn’t as crisp a restoration as Giant from the Unknown, the colors still pop, and considering how beloved these were around the world (and re-run on UHF channels in the early 1970s), the “perfect” copy of this classic probably doesn’t exist. A few splices remain, but they’re not too jarring. 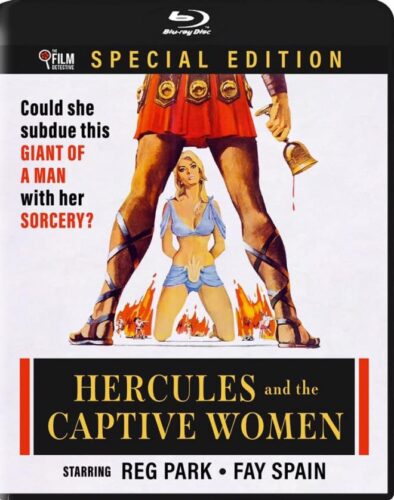 I’ll admit it — I was one of those people who only knew Hercules movies from the line in the song, but after watching this, I’m hoping The Film Detective does a restoration on Parks’ follow-up, Hercules in the Haunted World, which co-stars Christopher Lee. I’m happy to have it on my shelf.

You can put it on your shelf through this link. Fanboy Planet is an Amazon affiliate, and as such, may receive revenue from purchases made through that link.