The imposing and self-possessed Thomas (Rob Nagle) firmly drops that admonition late in Forever Bound, Steve Apostolina’s play about literature, obsession, and the Spanish Inquisition. Because nobody expects the Spanish Inquisition, and according to aspiring graphic novelist Edmund (French Stewart), Python always applies.

Stuck in a crappy L.A. apartment, battling depression and cockroaches, Edmund barely earns a living as a “book scout.” That means he scours garage sales, thrift stores, and libraries for buried treasures of first editions or autographed copies of important books, flipping them for profit to book dealers. It’s not going well. And his depression means that his graphic novel has stalled out. His fellow scout Shep (Apostolina) offers a loan, but Edmund thinks it’s really time to just grow up and get a “real job.”

Parallel to their verbal hijinks, the play presents a young maiden, Miranda (Emily Goss), and her mentor Thomas. They pore over Samuel Taylor Coleridge’s Rime of the Ancient Mariner, discuss Charles Dickens’ A Tale of Two Cities, and a mysterious coming ritual. If this is Edmund’s graphic novel, it’s rather opaque, but Alan Moore could very well be his inspiration.

One narrative plays out with a sitcom-like rhythm, as Edmund reluctantly goes along with a scheme from Shep that should solve his problems. In the darker story, things are only getting darker, even as Miranda, who eventually wants to be called Rosalind, seems to only get paler.

It’s tightly staged with Pete Hickock’s single set mostly representing Edmund’s apartment. Lighting changes designed by Bosco Flanagan transport us back and forth. Director Ann Hearn Toblowsky has delineated a clear sense of space for the actors, and of styles. At first, Stewart and Apostolina have the banter of old buddies, with occasional sharp jabs amongst the exposition. There’s a definite classical style to Nagle and Goss, with accents that aren’t exactly British, just better diction than you usually hear.

All the actors carry their parts to perfection. Though initially presented as diaphanous, Goss draws a clear line as her character finds her way to strength. Nagle remains tightly controlled, written to be and frustratingly so. It only underscores the horror the play heads toward. Toning down his sitcom skills, Stewart still has crack timing and command of his physicality, making Edmund more complex than the opening suggests. There’s a bit of a sad sack there, but much more as well.

It’s worth calling out Apostolina, who also at first appears to be a sitcom trope. In writing this dense, literate play, he’s given himself the least literate part — at least on the surface. Shep obviously has to know something about books in order to be surviving as a dealer, but he covers his depth in order to keep darkness at bay. 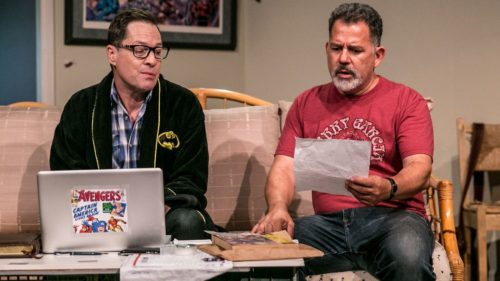 But none of that gets in the way of a narrative that picks up speed after setting the stage. Books and literature are important to the play, but references to them never slow things down. You may not remember that Gillian Flynn wrote Gone Girl, or know why Edmund’s run of Avengers – especially issue #4 — is so dear, and you don’t need to. Though you can ask me later if you don’t know. It’s fine detail that proves Apostolina knows this world, but also in this world, he has a bigger story to tell.

For this run of the story, you have two weeks left. The Atwater Village Theatre runs Sankalpa Productions’ Forever Bound Fridays, Saturdays, and Mondays at 8 p.m., with Sunday matinees at 2 p.m., though June 16th. It’s a little out of the way, but worth the trek for a cast at the top of their game in a nifty little play that’s more than it seems to be.