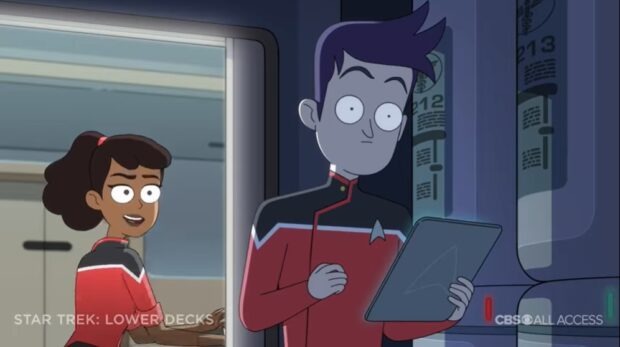 The Star Trek franchise has gone into darkness, gone beyond, and of course, boldly gone where no one has gone before. But CBS All Access is taking it lower with Star Trek: Lower Decks launching August 6, 2020 on the streaming service. Set onboard the USS Cerritos sometime in the late 24th Century (near the Next Generation), there’s a stirring adventure show happening; we just won’t see much of it. The Bridge Crew does the adventuring; the Ensigns on the lower decks do the shenanigans.

Though many episodes of Star Trek have been funny, this is the first out and out comedy set in that universe. Created by Mike McMahan, the show stars the voices of Tawny Newsome, Jack Quaid, Noël Wells, and Eugene Cordero (who was also on the sci-fi comedy show Other Space as well as Pillboy on The Good Place). All play Ensigns, assigned to mostly stay out of the way. It’s not quite a riff on John Scalzi’s Red Shirts, but it may be funnier. (And if you want your animated Star Trek to be more about the adventure, CBS All Access has the Filmation series from the 70s, too.)

Fanboy Planet is an affiliate of both Amazon and CBS All Access. Any purchase you make through links here may result in revenue for the site.