May 25, 1977. In fewer than 32 movie theaters across the United States, Star Wars opened. That was a Wednesday. By Friday, 8 more theaters added it. If 20th Century Fox hadn’t made those theaters book it in order to get The Other Side of Midnight later, it wouldn’t have been that many theaters. Young director George Lucas was so sure nobody would go see it, he fled to Hawaii so he could be underwater when the film went underwater.

From personal experience in San Jose, California, the lines to get in to see Star Wars were hours long at Century 22. 11-year-old me wasn’t able to go on Wednesday. Or Thursday. Or even that first weekend, because my parents were too busy to take me. But I knew how badly I wanted to see it. 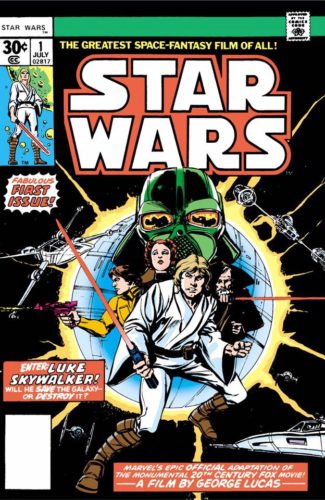 My friends had introduced me to the trailer months before. (By the way, yes, only ONE trailer, which didn’t have a teaser released a day earlier promising that a trailer was coming, followed by two more trailers.) Two months before it opened, I had biked over to the local pharmacy with a dollar to see if there was a new Doc Savage paperback, and on the comics spinner rack there was the first issue of Marvel’s Star Wars comic. By the time May 25 rolled around, three issues came out, taking my knowledge of the story up to the point that our heroes were caught in the Death Star’s tractor beam.

Thanks to that first issue, my knowledge was actually more than made it into the movie, because writer Roy Thomas and artist Howard Chaykin were working off of production stills and a draft that still included a much bigger part for Biggs Darklighter, Luke’s childhood friend. Thus when he dies in the movie, I understood what a huge loss it was for Luke. That was his best friend! 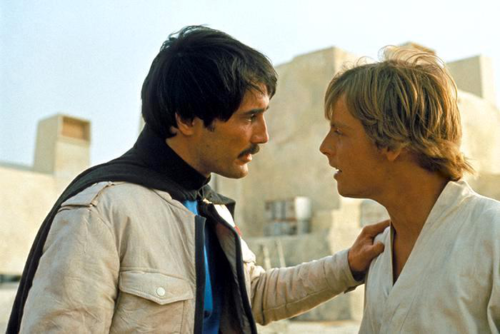 It was the second week of the film’s playing that I got to go. My dad drove a couple of friends, my little brother, and myself, absolutely convinced that we were crazy for telling him we had to go three hours early. Then he saw the line already formed in the parking lot. My brother, then six, was so excited he actually behaved really well while we waited, not once swatting whatever book I was reading out of my hand.

Finally, after an agonizing wait, we got good seats in the center of the theater. We were all eager. The lights started to dim. My brother turned to me and said, “I have to go to the bathroom.”

In a horrible moment of big brotherdom, I said, “then go.”

He made it back safely.

We heard that 20th Century Fox fanfare, saw those blue letters on a black background… “A long time ago, in a galaxy far, far away…” and then… that theme! That logo! That terrific movie that we went back and saw again and again, making our parents go a couple of times.

Star Wars played at Century 22 for over a year, and I had to go see it when they released the movie poster of the action figures on a birthday cake. Later, Lucas added the “Episode IV: A New Hope” title to the opening crawl, and I had to pay to see that. Then there was a re-release with a promised trailer for The Empire Strikes Back, and I had to see that. It’s also possible I went to see another re-release when there was a trailer for Return of the Jedi, because in those days, that’s what you HAD to do. 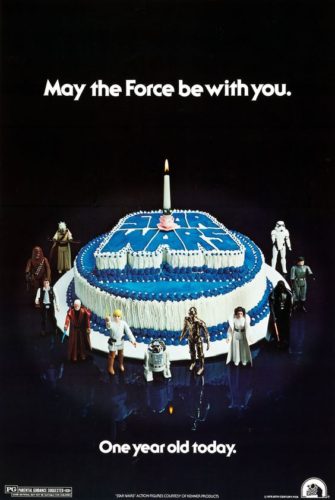 Star Wars was a phenomenon with an impact it’s hard to communicate, because for audiences today, everything already has changed. Everywhere you go, you run into people that know not just Star Wars, but all kinds of pop culture. Before Star Wars, sports was the connective tissue at school and in social groups. Maybe people would ask me “how’s school going?” But after Star Wars, even Mrs. Meisenbach down the street, a former teacher in her 70s, could talk to me about it. She levied the first bemused criticism that I took to heart — how can Princess Leia’s outfits stay so brightly white through everything?

If 11-year-old me could see that people still do, he would have been flabbergasted. (Because he did use words like flabbergasted — thank you, Doc Savage.) For good or ill, I guess 11-year-old me can see that, because thanks to Star Wars, it was also okay for me to keep him alive inside. 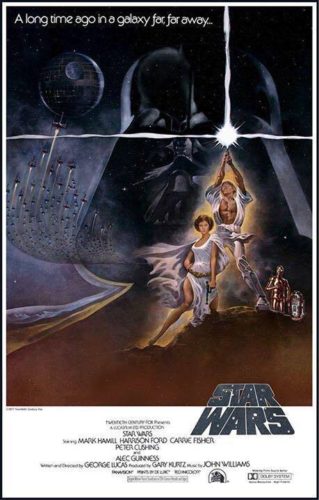