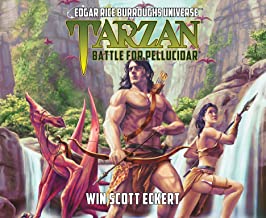 The myth of the jungle lord of “deepest, darkest Africa” doesn’t quite have a place in 2020, and even he knows it. Win Scott Eckert, working with the blessing of Edgar Rice Burroughs, Inc., may not lean heavily on that point, but he does the best thing he can do to make Tarzan work for modern audiences. Battle for Pellucidar references Africa, but places Lord Greystoke firmly working for the Allies in World War II. He battles a Nazi scheme that takes him from the wilds of Europe to California and, inevitably, Pellucidar, the lost world at the center of the Earth (maybe).

Even then, Eckert has Tarzan share the focus with his granddaughter, almost his equal, and possibly a more interesting character for new readers. Since Tarzan is one of those characters most people recognize in broad strokes, reminding and focusing on his extended family is an important touch. There’s more to the mythos than Disney or Johnny Weissmuller gave him. There’s plenty of Tarzan being that Tarzan here, but also plenty of the calculating, heroic intellect that most people don’t know the character has.

But this is also part of the Edgar Rice Burroughs “super-arc,” Swords of Eternity. The key character tying it all together is the one created for this series, Victory Harben, who gets much more to do here than in the previous book, Carson of Venus: The Edge of All Worlds. Here we get a younger Victory, still a child but already with the spirit that Matt Betts and Christopher Paul Carey showed her to have as a young woman.

Here Eckert lays out what makes this super-arc so fun, even if you aren’t familiar with the Burroughs characters. Reading the series, we’re not encountering Victory in chronological order as she explores the ERB Universe. And Eckert provides footnotes and references to other adventures, hopefully spurring new readers to check out more of it. The novel takes readers to Pellucidar, a place Tarzan had gone when Burroughs wrote him. But it also has a separate series, beginning with the best-known title, At the Earth’s Core. Eckert sows the seeds for readers to jump around this universe as much as Victory does. All the while, Battle for Pellucidar is exactly what it should be: a non-stop adventure, encountering bizarre creatures, clear morality, and new worlds.

The more mature Victory takes center stage in the back-up novella (really, a nice touch from Burroughs’ pulpy origins, though on much finer stock), Clash on Caspak. That’s better known as The Land That Time Forgot, and writer Mike Wolfer gets to reveal clues as to who or what is messing with Victory and her mentor Jason Gridley. It’s a fun story, too, with further notice served that this project also intends to evolve characters’ attitudes and understandings to better reflect modern tastes — though Victory was ripped from Pellucidar in 1950.

On a personal note, Tarzan: Battle for Pellucidar was just what I needed to read during a difficult time — Tarzan fighting Nazis is uncomplicated and necessary.

Note: I was given an ARC, but due to that above difficult time, I was only able to finish it this morning. It’s available now from Amazon and from Edgar Rice Burroughs, Inc.. Fanboy Planet is an Amazon affiliate; any purchase made through a link on this site may generate revenue for us.