There’s this new magazine on the stands this week that feels… both new and old. I mean that in the best way possible. After moving offices from New York City, where decades ago William M. Gaines founded a magazine based in irreverence and surprising skepticism, Mad Magazine has returned, relaunching with a new number one. Because, you know, that sort of thing boosts sales in comics shops. If it’s enough to make you pick it up — and it was for me — then you’re in for a treat. Because the new Mad looks a lot like the old Mad, except maybe with slicker paper. Not only that, it’s as funny as it ever was — and, thank heavens for the youth of America that I pray will buy it — as biting in its humor.

New Executive Editor Bill Morrison clearly didn’t feel a need to fix what wasn’t broken. But the relaunch afforded him the chance to acknowledge the cultural influence the magazine had while knocking the wind out of its own self-regard. I had forgotten that thanks to Mad, I can spell the word “potzrebie” by heart, and it was nice to see it resurrected for a superhero gag that’s just silly — and great. Sergio Aragones is still here in the margins, elder statesman Al Jaffee provides a Fold-in back cover, and there’s what could and should be an ongoing feature “The Wisenheim Museum,” where modern artists guest to highlight how Mad  influenced them. I, too, fondly remember Lena the Hyena.

There’s a movie parody of The Last Jedi with jokes that made me wince, followed by jokes that made me shake my head thinking, “yeah, that’s true.” (And there’s an homage to Sergio Aragones buried in there.) But the real brilliance of artist Tom Richmond shines in the Riverdale parody. For three pages he recreates Will Elder’s art from the 1954 parody “Starchie” — and a little from “Outer Sanctum” — and then segues into “Riverdull.” Granted, writer Ian Boothby takes some sharp jabs, and the combo of writer and artist had me almost crying with laughter. Which is pretty embarassing at home alone at the kitchen table.

But there’s plenty that feels new, sharp, and painful. “Make America Greet Again,” a catalog of greeting cards allegedly written by our current POTUS, should teach a new generation to keep a jaundiced eye. A fun party game would be to have kids research whether it’s writer/artist Teresa Burns Parkhurst wrote the punchlines, or did she just take actual quotes and find a greeting card for them.

I don’t know if it ever really faded away, but if it did, Morrison and company have certainly made Mad great again. 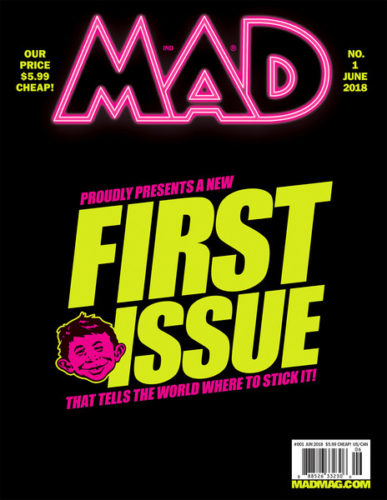